Jack Latham follows the illusion and conspiracy that has come to surround Bohemian Grove in new series ‘Parliament of Owls’. Nestled deep in a thick redwood forrest in Northern California the 2,700 acre Grove sits obscured from view and purposefully isolated from the outside world. Owned by the men’s-only Bohemian Club, the location plays host to a two-week-long summer retreat for its members each year, consisting almost exclusively of elite politicians and businessmen. Since it formed in 1872 the Bohemian Club and its high-profile members have remained incredibly secretive about the goings on of the club itself or their annual retreat. Little more is known other than this incredibly private nature and their symbol of an owl, thought to be a representation of wisdom. 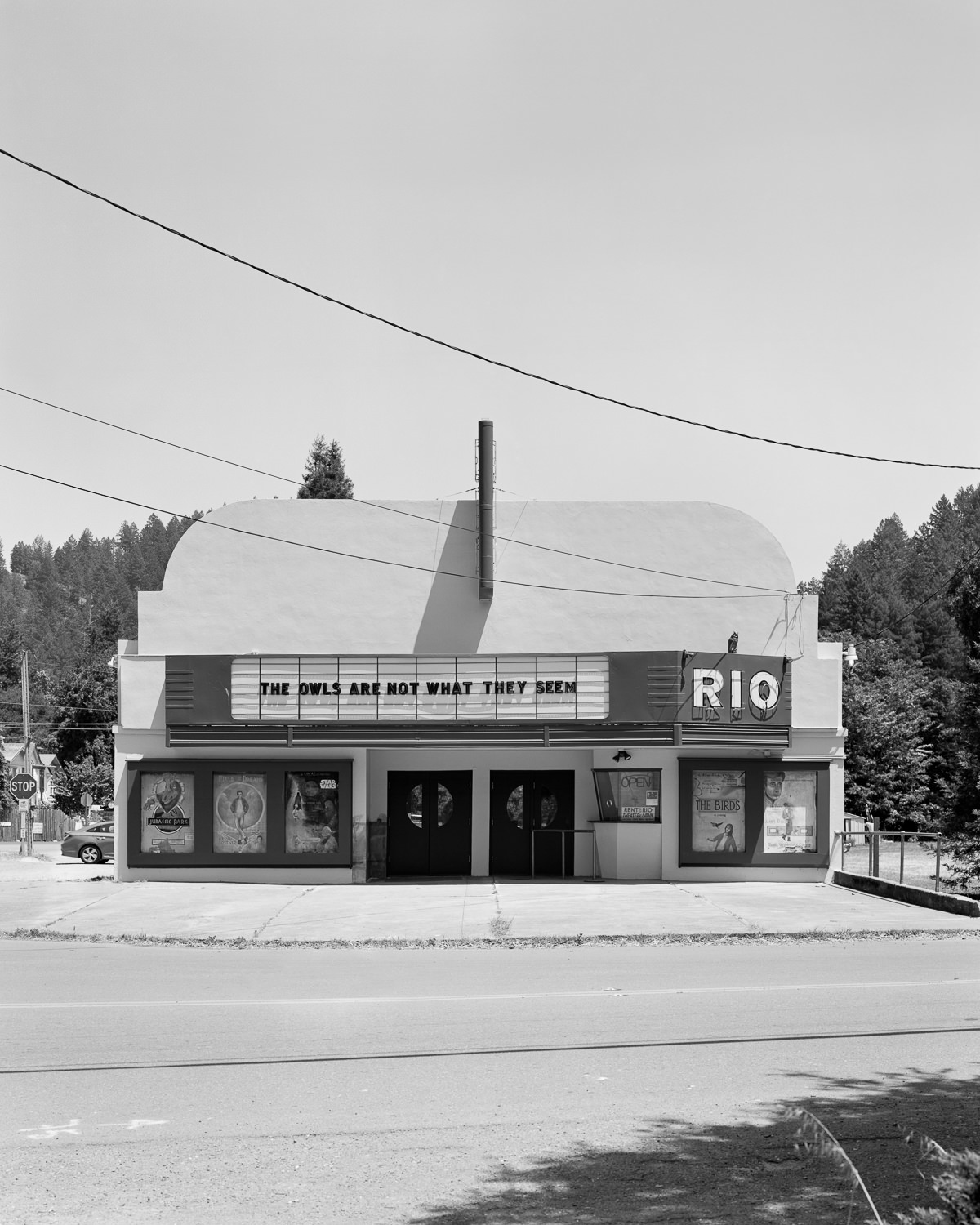 Jack explores how the presence of such an elite, private space, has become the topic of countless conspiracy theories over the years from both the left and right. The series follows the people and locations in the vicinity of the Grove that have in one way or another protested it or fed into the rumours. With the aid of the internet these conspiracies, like many others have increased dramatically, and in 2000 far-right activist and founder of fake news platform ‘Info Wars’, Alex Jones, broke into the Grove and filmed the ‘cremation of care ceremony’ in which an effigy said to represent the members ‘worldly cares’ is burnt.

Rather than join in with the claims surrounding the Grove, Jack takes an observational seat allowing the viewer to take what they will from the series. He does ask the question of what a mens only private space means today. A world where far-right activism and extremest ideologies are seeping into the mainstream at an alarming rate, despite prominent movements of equality and feminism. It seems too that where there is a space of power and secrecy people will always want to find an explanation. Do you find because of the slower pace of film it gives you more time to get to know your subjects or for them to relax and trust you?

If someone lets you take their photo it’s an incredible privilege. It’s such a generous thing for a stranger to do for another stranger, there is an element of trust but 9 times out of 10 people seem to want to have their photo taken on the camera rather than by the photographer because it’s so peculiar to be carrying a large format camera in 2019.

With a subject like Bohemian Grove, it’s interesting in itself I think people want to talk about it and learn more about it.

I think the thing I do find frustrating about photography though is that I use photography as a vessel to explore the story, it’s the stories that are what I’m trying to create, and the photos are like the illustrations. Not that it makes them lesser but they're just these kind of graphics that point to something bigger than just photography. 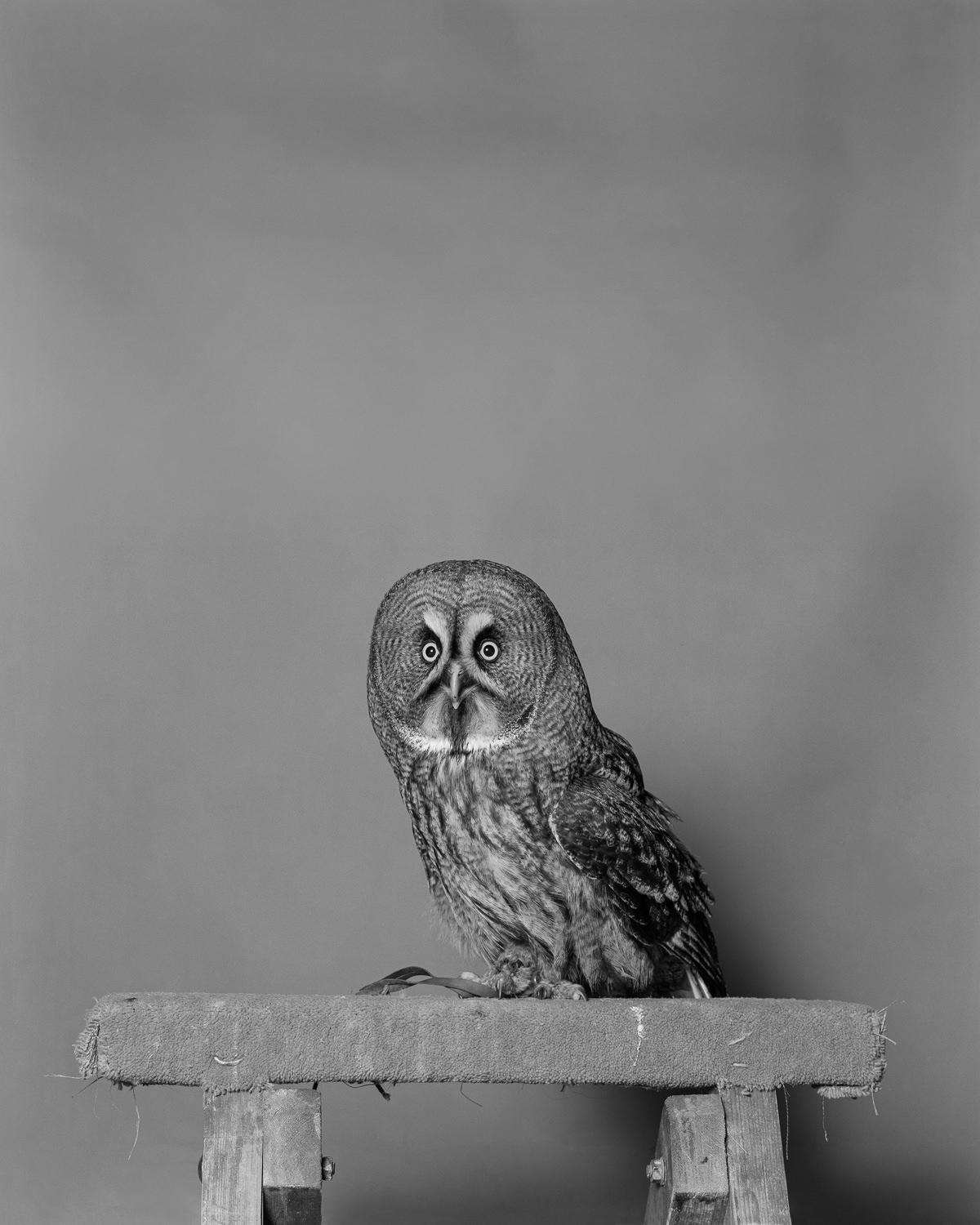 I know you do a great deal of research before you embark on your projects, you don’t just, say turn up to a location and photograph what looks nice it’s a very different process. Would you say there’s almost more work put in before when you’re planning ?

I think it’s almost half and half, I make my worst photos when I feel unprepared. Some people can really thrive on that but I like to have at least some framework. So with ‘Pink Flamingo’ I followed a map very loosely, a trail. And with ‘Sugar Paper Theories’ I followed a crime case so there was an obvious sequence I could follow. Then with Bohemian Grove it’s like a land mass and there were these things which had happened over time which I was trying to recreate.

So I always use some sort of foundation but I always like letting some things happen by chance, not trying to orchestrate things too much.

When you were planning this project did you try and contact the Bohemian Club directly to try and get in or meet with someone from there?

I did try but they don’t speak to journalists or anyone outside of the club, and it is impossible, they are impenetrable. It’s all a bit smoke and mirrors, because even though the project starts off about the club it’s actually more about that dilemma of what happens when there’s this private space, and then conspiracy theorists project new meaning. And then the project kind of develops and follows the evolution of Alex Jones, because I see a comparison between how conspiracy theorists form narratives, through taking things out of context and connecting them, which is what photographers do. In all of my work I freeze moments from different times and then sequence them so that they make sense and then try to draw parallels and conspiracy theorists do the same thing but then they present it as truth and that’s the crux of the whole thing. 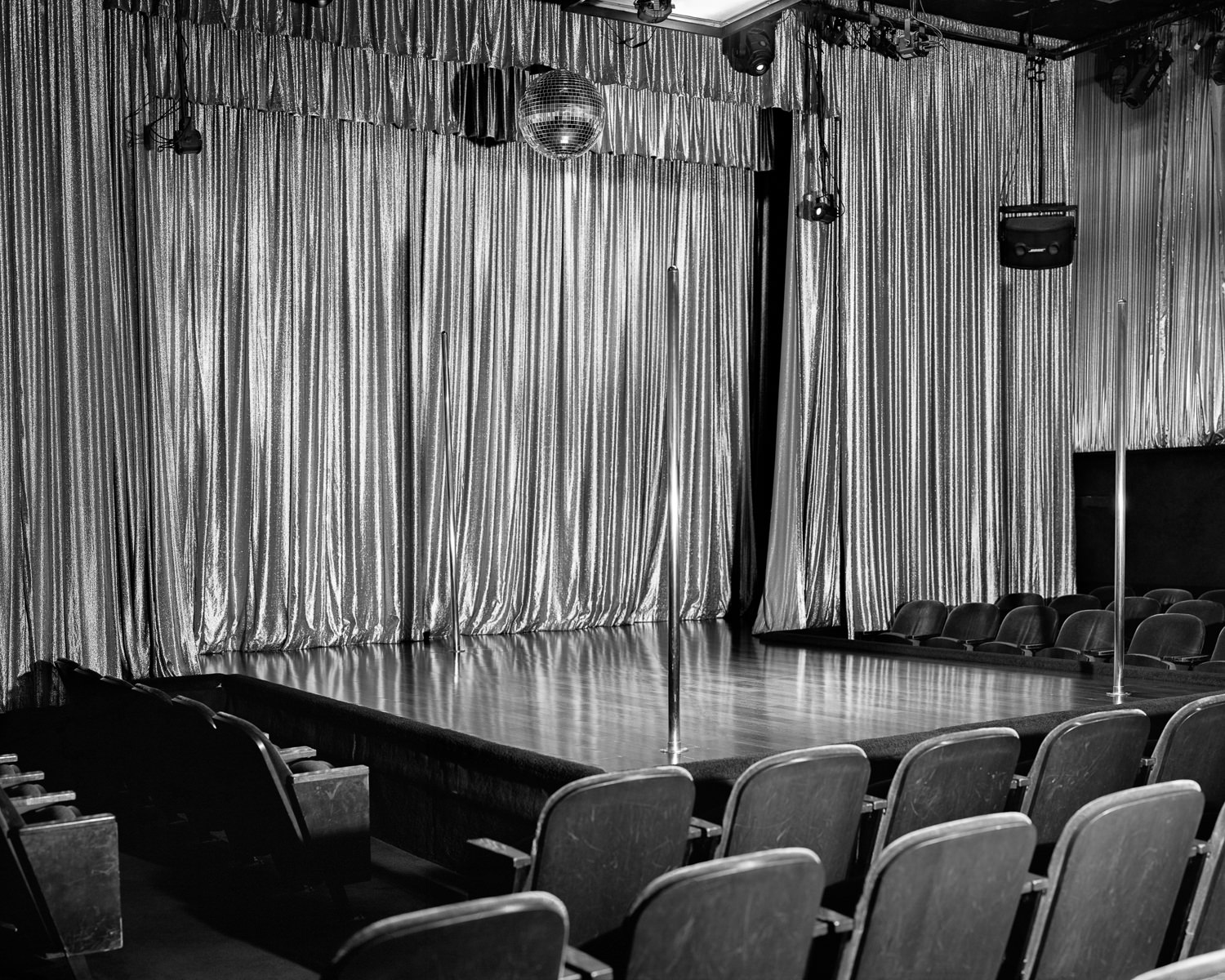 Were you drawn to the subject originally through the conspiracy around it or was it just the idea of it being private and impenetrable?

It was just a mix of everything at the time, also the rise of Donald Trump, one of the most offensive men in the world who is also a big fan of Alex Jones. A lot of the miss-information and fake news Donald Trump presents as fact he got from Alex Jones’ Info Wars. Trump’s campaign manager Roger Stone was also Alex Jones’ manager.

So there’s a real lineage here because Alex Jones was a nobody until he broke into Bohemian Grove and filmed these elites and then now here he is influencing one of the most ‘elite’ men in the world who is also an incredible misogynist. Focusing on things which I am a part of or can be a part of, like patriarchy or mens clubs and I looked at how I could challenge or explore that. Although I’ve kind of come full circle now, because I understand why mens groups exist and I understand why if you are the top 1%, you own a FTSE 500 company, and you're a multi-multi billionaire, there’s only a few people in the world that you can probably explain how stressed you are to and they also typically tend to be men in this 1%.

So when they meet and they want privacy away from the press and their families I can understand why that space is sacred to them. I actually think mens groups are actually quite important. I went into it with a pre conceived idea but I feel like I’ve come out of it with more of an understanding, from both sides, just a more rational perspective. I think the fact it’s in black and white adds to the sense of separation as well, was this intentional?

I think I partly just wanted to do something visually different to my previous projects (which were in colour. I also used flash for the first time and wanted to create something quite cinematic and timeless.

Another reason was that I wanted to develop the negatives myself in water collected from the Grove, and I can’t develop colour myself. Me and my partner actually kayaked up to near the Grove and collected water from the spring that runs through it. The idea is that everything you are looking at has been tainted by the elites, it’s all been affected by this private space.

There’s a string of motels around California that I used to develop all my film. I think we probably condemned one or two of the motels. We would be up all night until like 3am developing, then we would have to hang all these negatives and go to sleep in the same room. It was actually horrific, you shouldn’t breath the chemicals in, we woke up the next morning with blood all down our faces. It was a cheap way to develop though, the cheapest labs in the world are Motel 6’s. 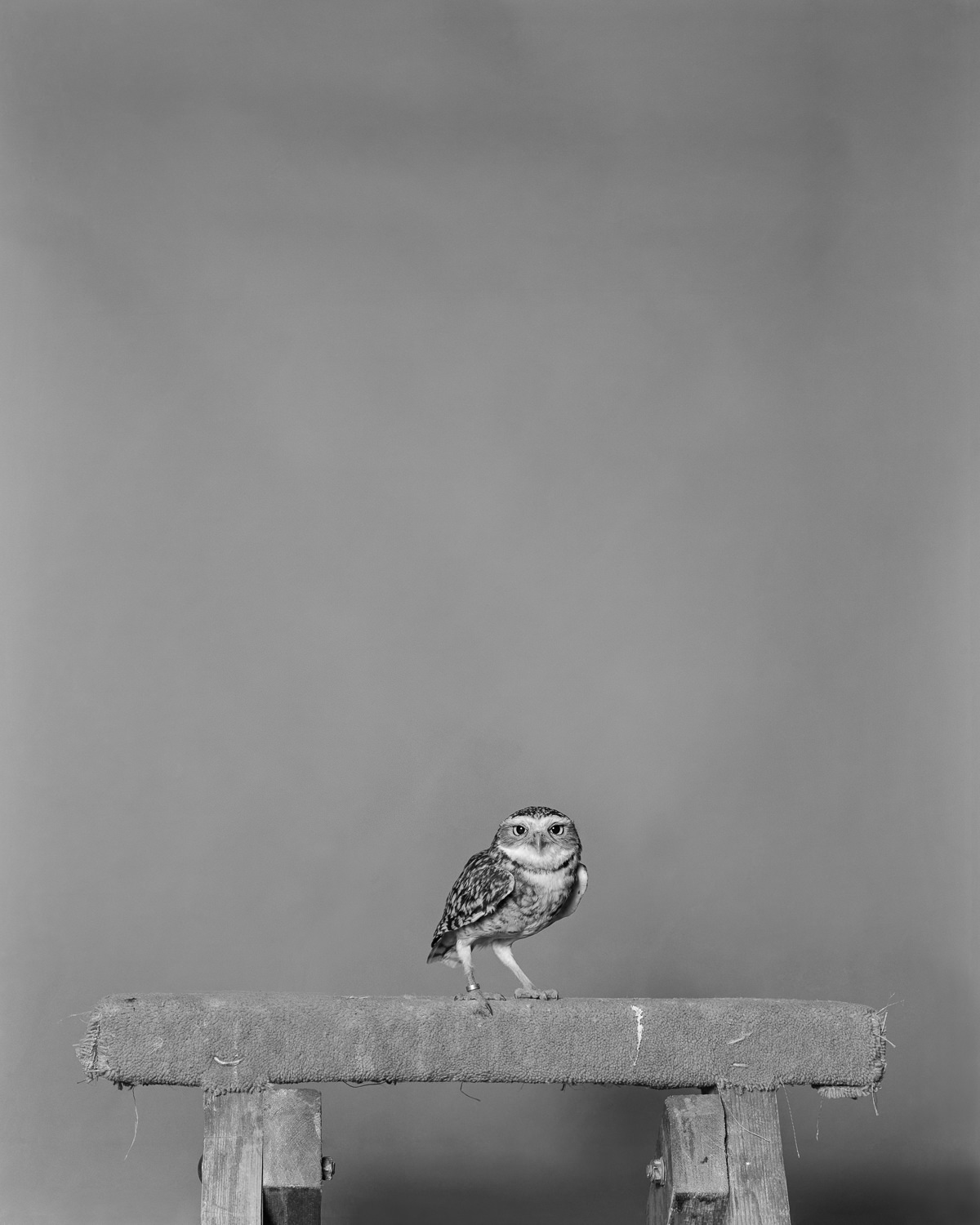 The symbol of the club is an owl, hence the title ‘Parliament of Owls’ and the owls in the series. Where were the owls you photographed?

There were at a rare bird of prey farm in Gloucetershire actually. They are all North American owls though. In part of my research I bought a load of internal magazine from the Grove from an ex member who passed away, and all the magazines had a list of all the owls you would find within the Grove so I went and sought out these owls and photographed the top 5 - a great grey owl, burrowing owl, screech owl, barn owl and great horned owl.

Was there any backlash with the project while you were making it?

Not at all. I think that sort of thing is usually just online talk, no one actually interacts with people in that sort of way in person, at not least 9 times out of 10. I dealt with a lot of the alt-Right doing this work and I also dealt with people that are politically on the right.

Mike Hanson who I photographed, is Alex Jones’ best friend, he’s the cameraman that broke into the Grove, a staunch Trump supporter and Alex Jones fan, but one of the most lovely people. The thing that I think is evident with this project is that even though it feels like we’re very politically divided when you start speaking to people they can actually be very accommodating.

If there was backlash it would probably just add to the project even more. But I’m not saying anything that hasn’t already been said and I’ve been very civil and honest with my intentions, I tend to think those kinds of things emerge when people aren’t truthful. 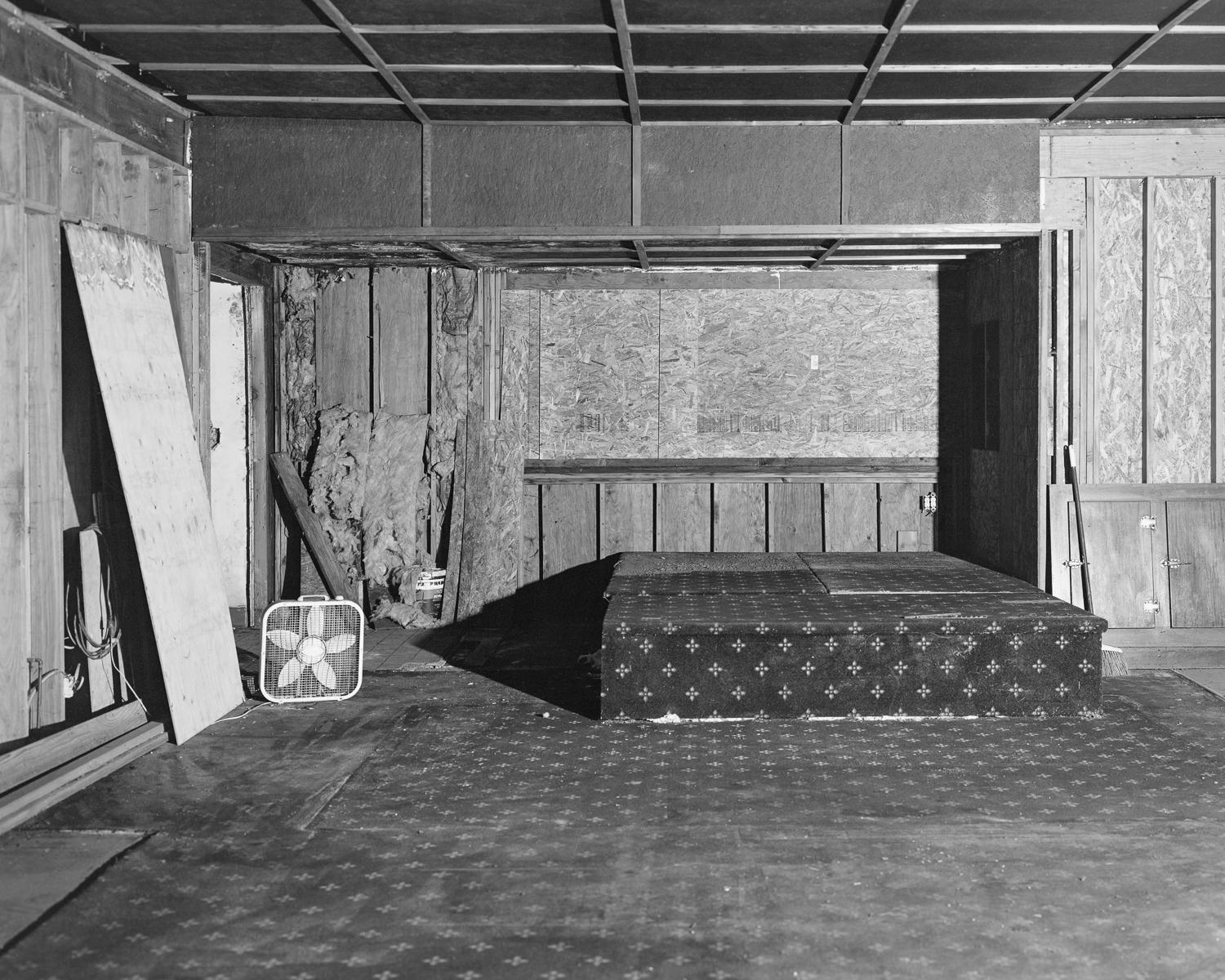 How did you Meet Mary Moore, the protestor?

Mary Moore is one of the oldest protestors of Bohemian Grove, she started something in the 70s and 80s called ‘The Bohemian Grove Action Network’, which was basically a bunch of flower power hippies getting together every year coinciding with the opening of the Grove and protesting.

Mary lives just up the road from the Grove and has spent most her life protesting many things, she has all these different cabins on the land and each one is almost a decade of her protests. She was part of the black panthers, anti-Nuclear movement, the legalisation of weed in California, anti-Bohemian Grove of course, and campaigning for Jesse Jackson.

Mary has kept records on the Grove over the years in the same way Mike Hanson has almost got the unofficial Alex Jones museum in Texas which is also a bunch of folders and pictures. They’re collectors, and me as photographer the way I work is I collect also, it’s a process of documentation. In a weird way the left were doing it, the right were doing it and there was me in the middle observing everybody collecting.

On one side you’ve got Mary Moore, who is anti establishment, we the people’ and then on Mike Hanson’s you’ve got Alex Jones as this hero figure suppodedly exposing the Illuminati, and the new world order. These two people are from opposing sides but the common denominator is they are anti-elite. 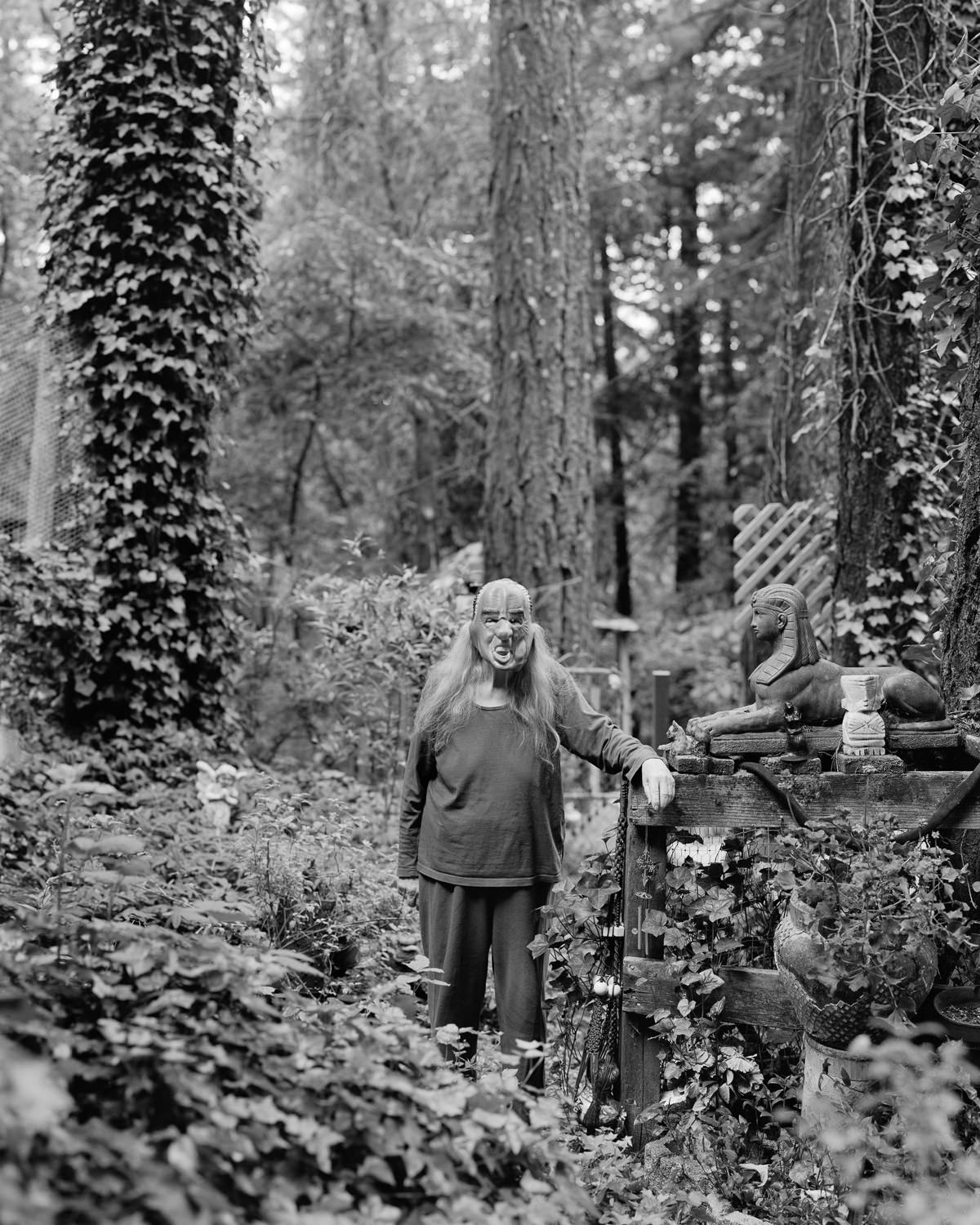 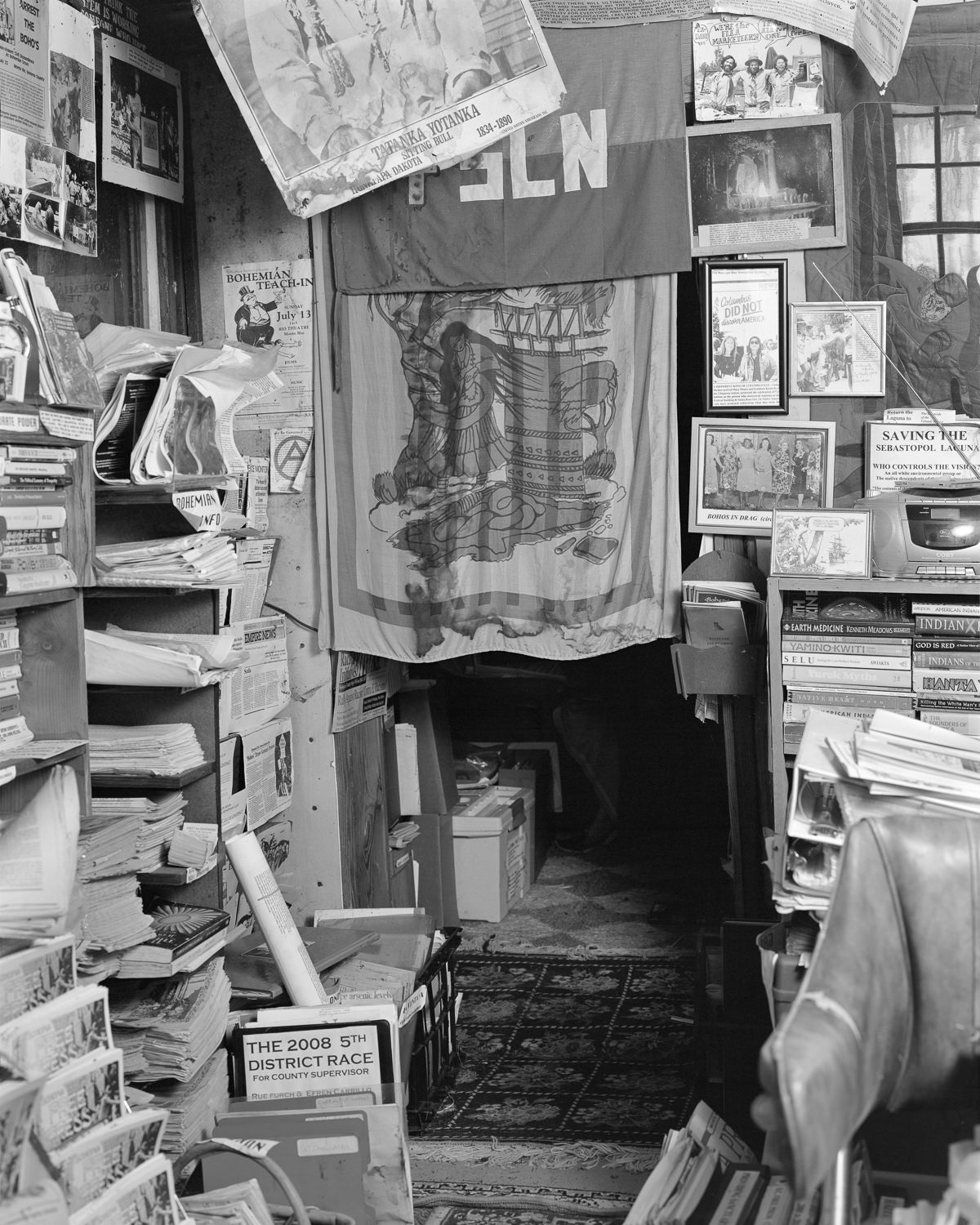