Inchindown is one of the worlds largest underground man-made structures, situated in Invergordon, Scotland. The site made up of six tanks each measuring 237 metres long, 9 metres wide, and 13.5 metres high, was constructed for the British Navy between 1938 and 1941 to be used as an oil storage facility in WW2. Overground oil depots carried the immediate risk of being destroyed by bombs, so these underground containers provided secure storage for the Navy’s fuel. The tanks haven’t been used to store oil since the end of the war but small guided tours can be arranged to look around them them.

Following an initial trip into the tanks, photographers and lovers of the extreme, Simon Riddell and Dave Allen decided to embark on a highly ambitious project. Their plan involved taking a photograph on Simon's Intrepid 4x5, processing it, and then making a print of it, all whilst underground in one of the tanks. This meant turning one of the tanks into what may be the world’s largest and most challenging darkroom space ever. As if that wasn’t ambitious enough they decided to restrict themselves even more by only shooting one frame of film, and printing on Gelatin silver fibre paper, which requires a great deal more water, and drying time than Resin paper.

The entry space to the tanks is small and restricted so a conventional enlarger would not have been an option. Instead they used the very first production run of the Intrepid Enlarger, fully putting it through its paces. Their mission to create the largest print they could also meant they had to construct their own upright easel board and DIY darkroom trays. They documented the whole process and you can see the trailer for ‘One Shot: Inchindown’ at the end of this page along with premiere details. 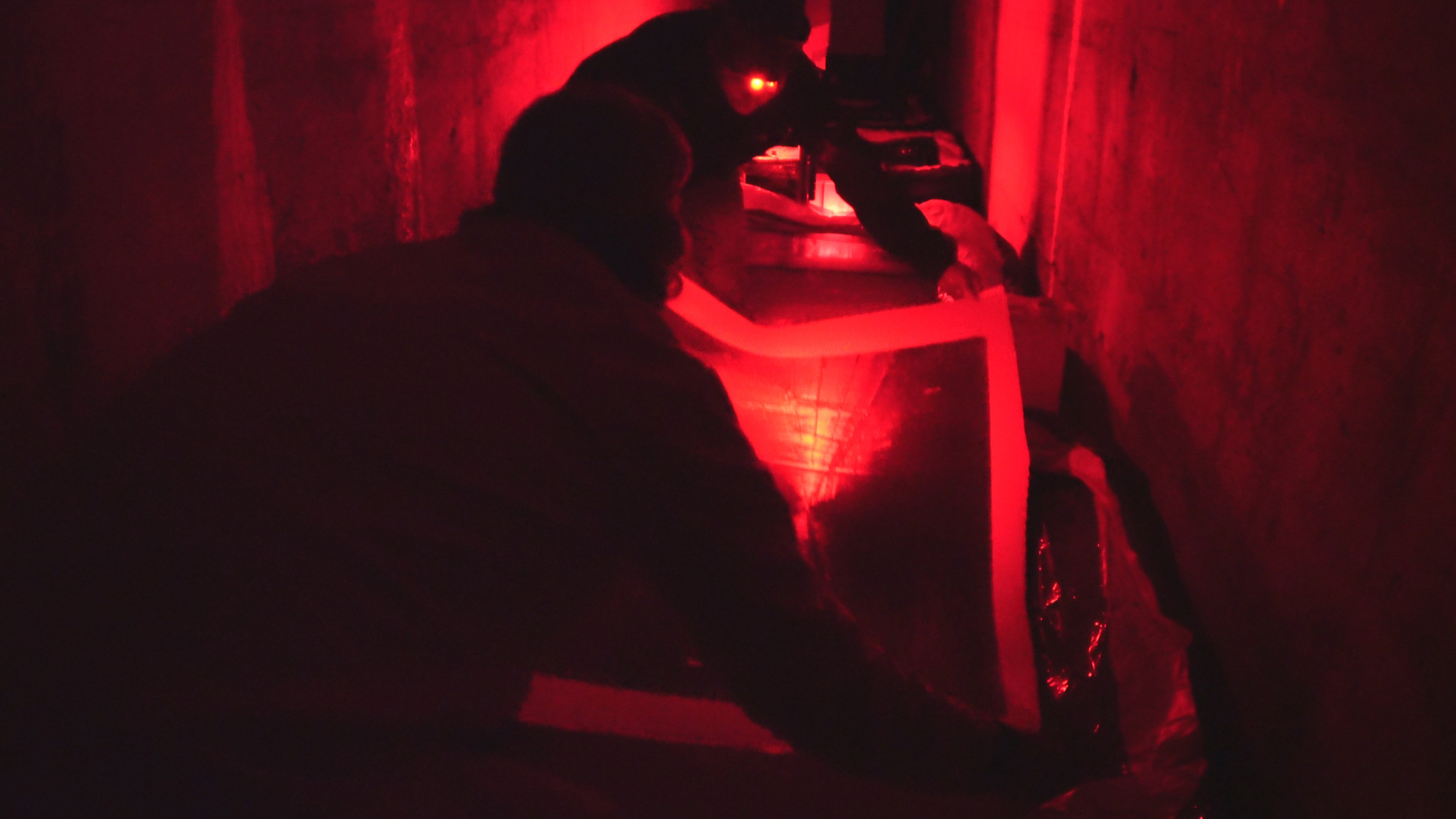 What made you decide to embark on such a project? And how did the plans come together?

In February of 2018, Simon and I met for the first time in person. We both share a love for the extreme (climbing, gnarly conditions, etc) and photography. We immediately bonded over the intersection of those two things. During that time, we were fortunate to get brief access to the Inchindown underground oil storage facility in the Scottish Highlands.

The following November, Simon left a message for me outlining the general idea of the project. He had recently learned of the upcoming Intrepid Enlarger and wondered if we could turn the underground access tunnels into a darkroom.

I really liked the idea - so, for the following months we honed it, discussed possibilities, limitations. Also, I (somewhat masochistic, admittedly) insisted that we should only take one negative so as to make things even more difficult. Both of us thrive off of challenges, and it seemed an interesting one. 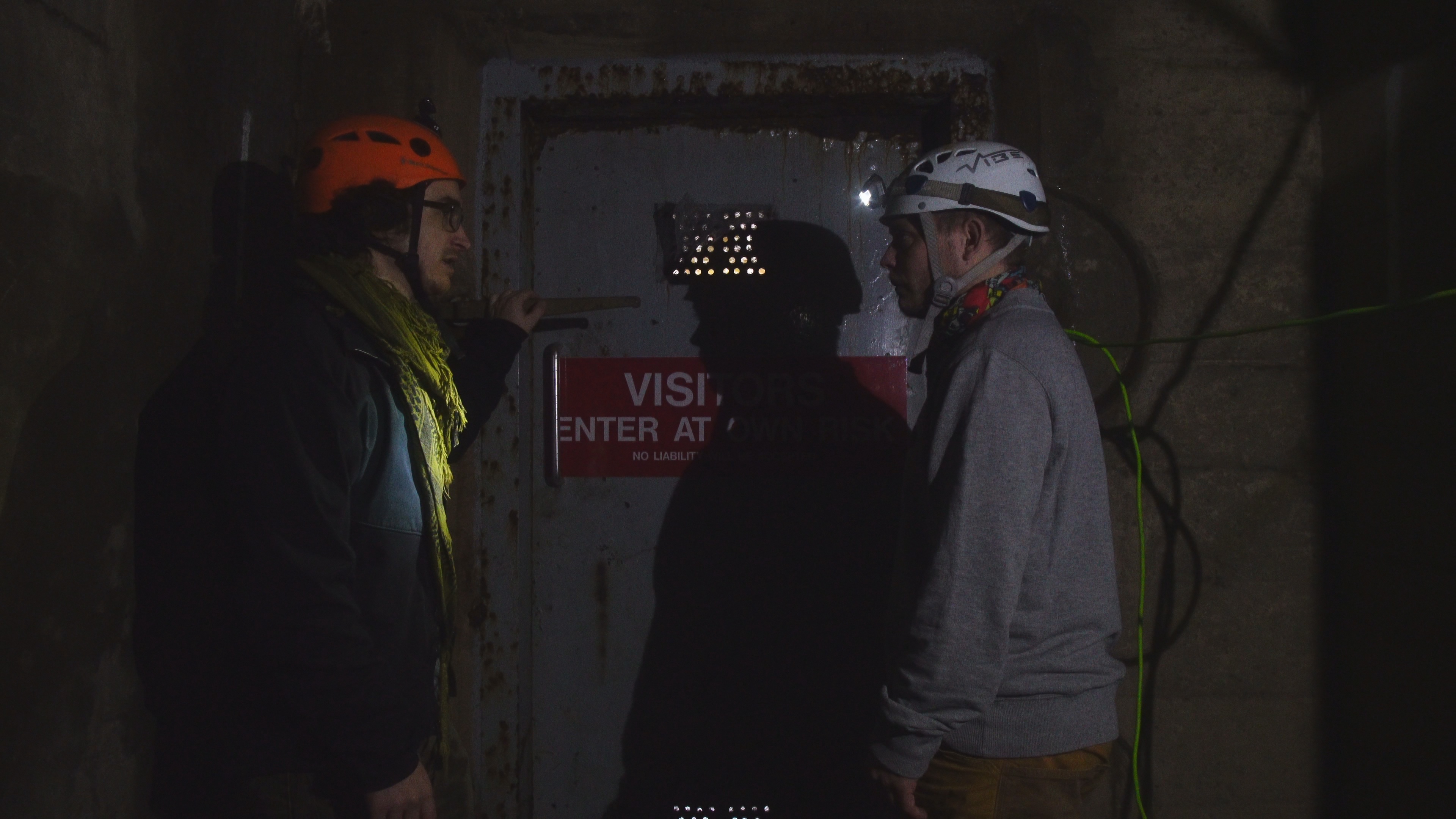 What were the biggest challenges you faced and how did you overcome them?

One thing we both decided on was that if we did this, we’d have to try and produce the best possible print in what might be the worst possible location. To us, this not only meant going large (127cm roll paper) but also printing on fibre paper.

Processing fibre paper requires a lot of water. Unfortunately, the facility has no water, so any we used, we’d have to haul into the tunnels. A few people I consulted strongly advised against printing fibre—making Simon and me even more set on using it. Simon bought a large water butt, and we hauled water up in 25 litre jugs.

Another major concern was processing such a large print in that space. Neither of us had printed that large before, so we had no idea what we were doing. In the end, we decided to buy paddling pools to process in, as they are rather light for their size and could accommodate a the print size.

Finally, the day before my flight, our camera operator (plus ‘extra set of hands’) bailed on us. To move forward with making a documentary, we’d have to not only do the project, but also all the filming, ourselves. Admittedly, I got a bit stressy over this. The solution seemed to be ‘spend three times longer in an underground facility than anticipated.’ 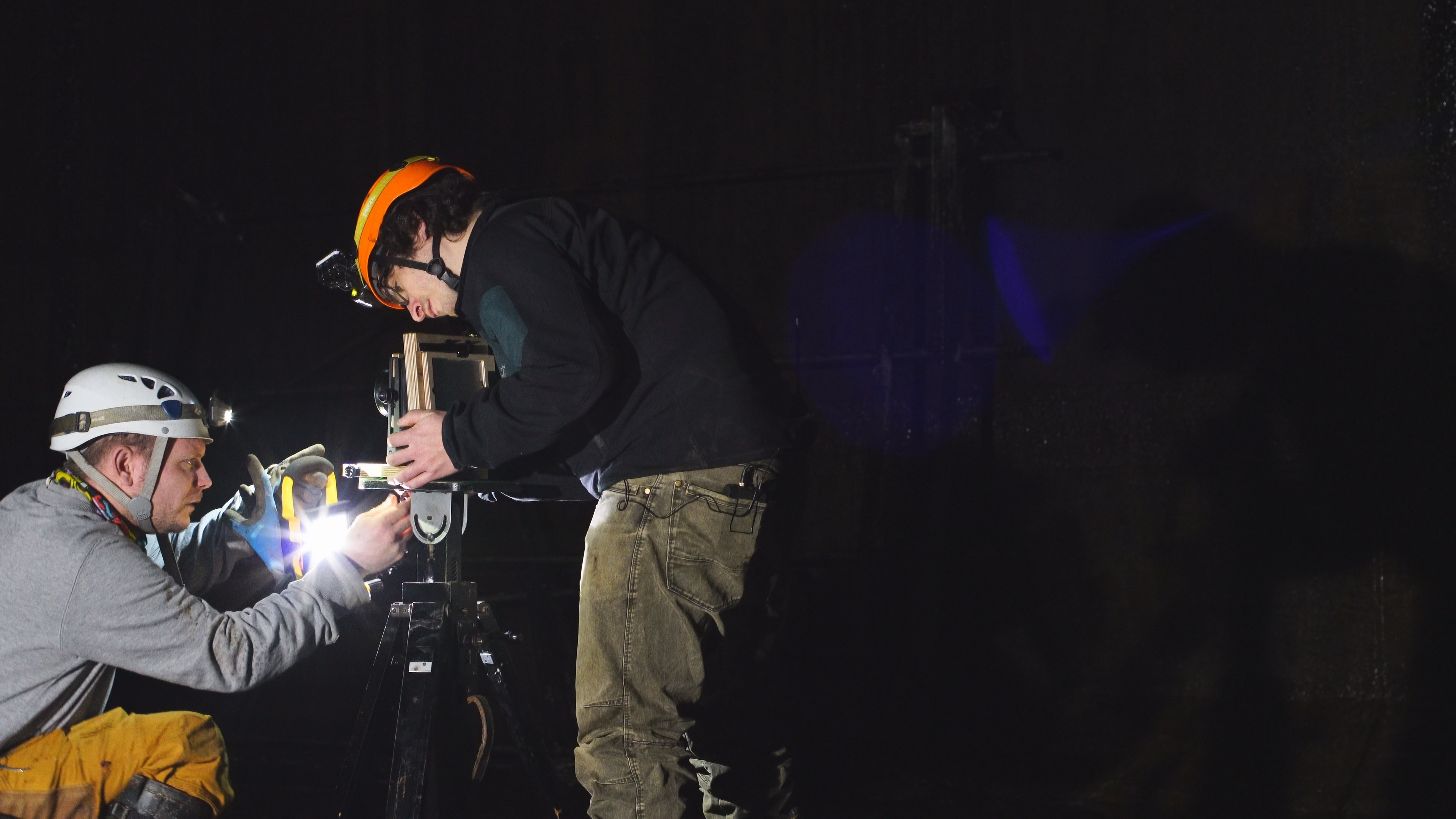 How on earth did you get all the gear down and yourselves?

Tell us more about the process for taking the photo - how did you illuminate the tank, and focus the camera etc?

For focus and framing, Simon went about 2/3rds of the way down the 237 meter tank with a flashlight. I was then able to focus on the flashlight. Since there is absolutely no light that enters those tanks, there’s no need for a dark cloth!

Then, we cut all lights, left the shutter open, and I walked the entire length with a flash gun, flashing at even increments. The shutter was left open for about an hour in total. 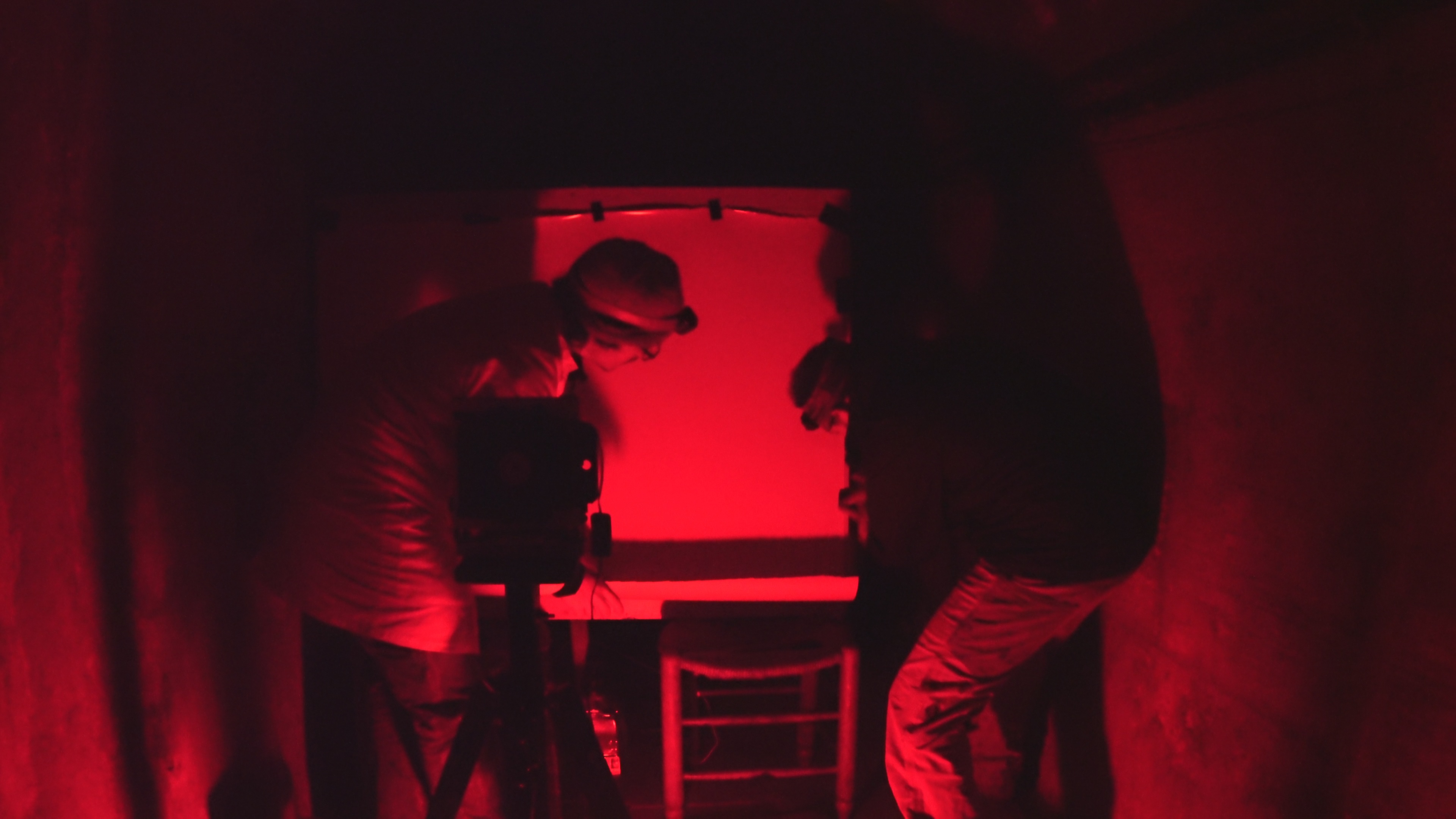 And what about the printing process? How did you go about setting up and making a print using the Intrepid Enlarger?

We set up our tunnel darkroom, did a test strip, and went for it! In the end, we only had time to make three 127cm prints. We were happy with the last one. The first was too dark, and the second was too streaky. The Intrepid Enlarger worked exactly as advertised. We used the same Schneider 90mm lens we shot with, and we didn’t have to position the camera that far from the enlarging easel (that Simon had built just a few days prior). 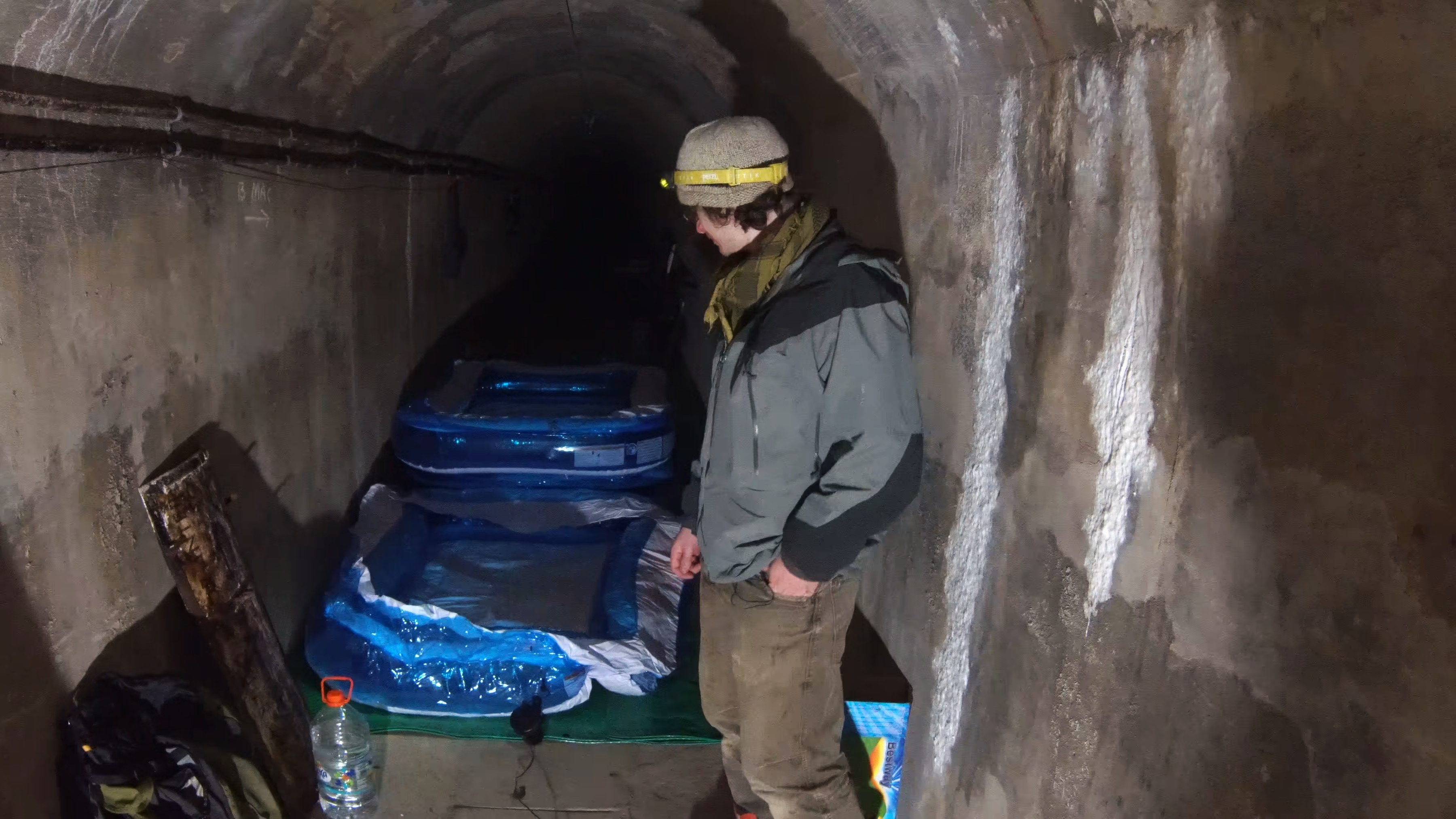 The film features a music score by Lucie Treacher, a local to the tanks, as well as sound effects captured on-location by sound space acoustic researchers and architects Mathias Klenner and Sophia Balbontin from Chile.

The Film is premiering on November 6th at 7:00PM at Inverness College lecture theatre, hosted by FLOW Photofest. Free but limited tickets and infomation on the event available here.