This summer I had the opportunity to travel home to the United States for six weeks. I live and work abroad, in south Asia, and so the chance to spend an extended period of time in my home state of Texas, and in Alaska, was extremely welcomed. I decided to bring the Intrepid 8x10 on the trip, which in total would include flying more than 20,000 miles, as well as a 2,000 mile road trip around South and West Texas, followed by a week-long stay hiking on Alaska’s Kenai Peninsula. 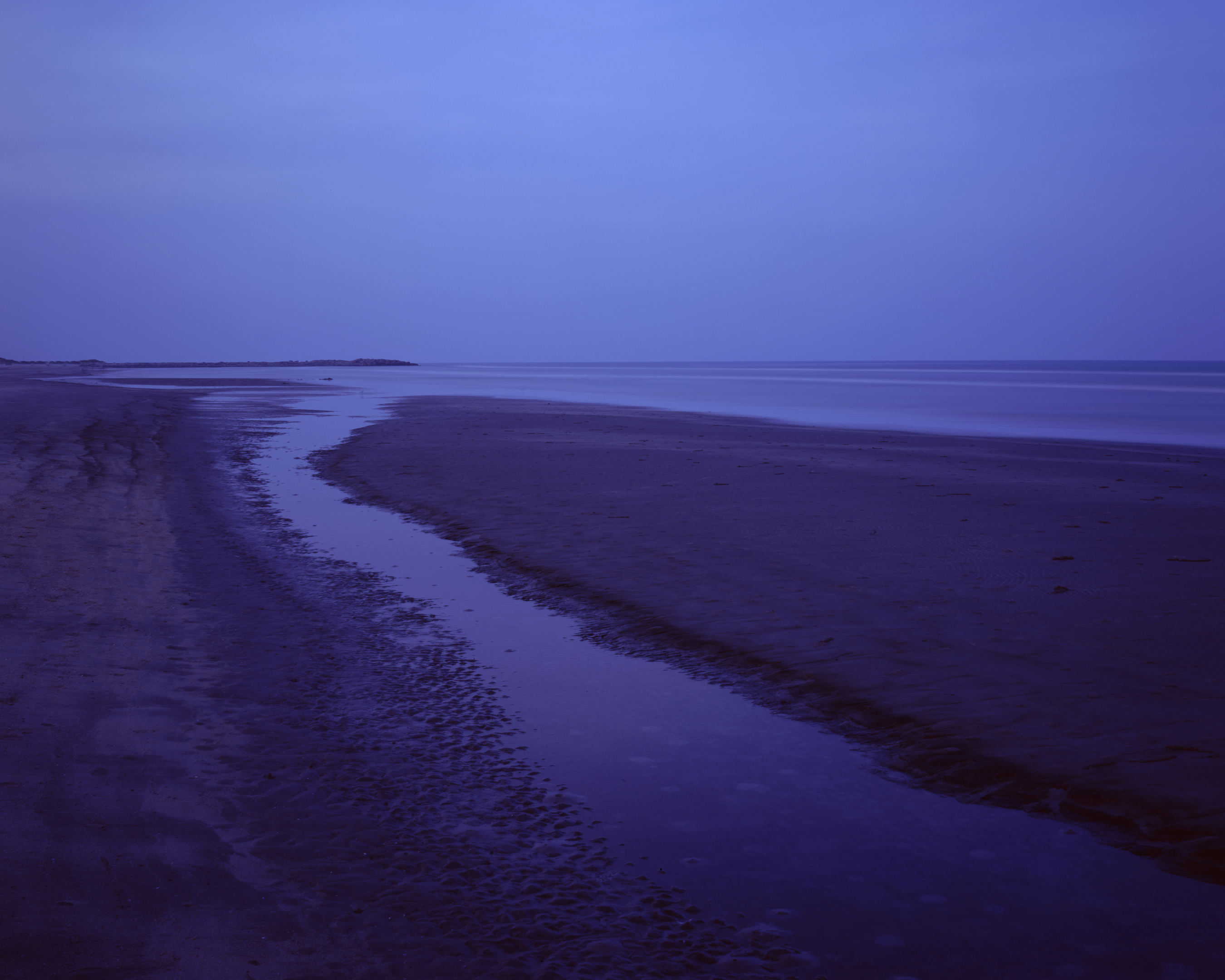 The road trip through Texas started at home in Austin and proceeded South, through San Antonio, and on to the Gulf Coast towns of Corpus Christi, Port Aransas, and South Padre Island. At Mustang Island State Park, I set up the composition above just after sunset, which required a long exposure of seven minutes at f/45. A park ranger drove by mid-shot to explain that the park had closed and that we would have to leave, but the numerous subsequent questions about what the item on my tripod was (a camera? it’s wood? is it old? is it expensive? can you find film?) afforded me enough time to wait to close the shutter until the appropriate exposure had been reached. Other than in true wilderness areas where one is left in quiet solitude, it is rare that a large format camera does not elicit unsolicited company. However, in times like at Mustang Island State Park at dusk when the park is closing, these inquiries can be of great use. 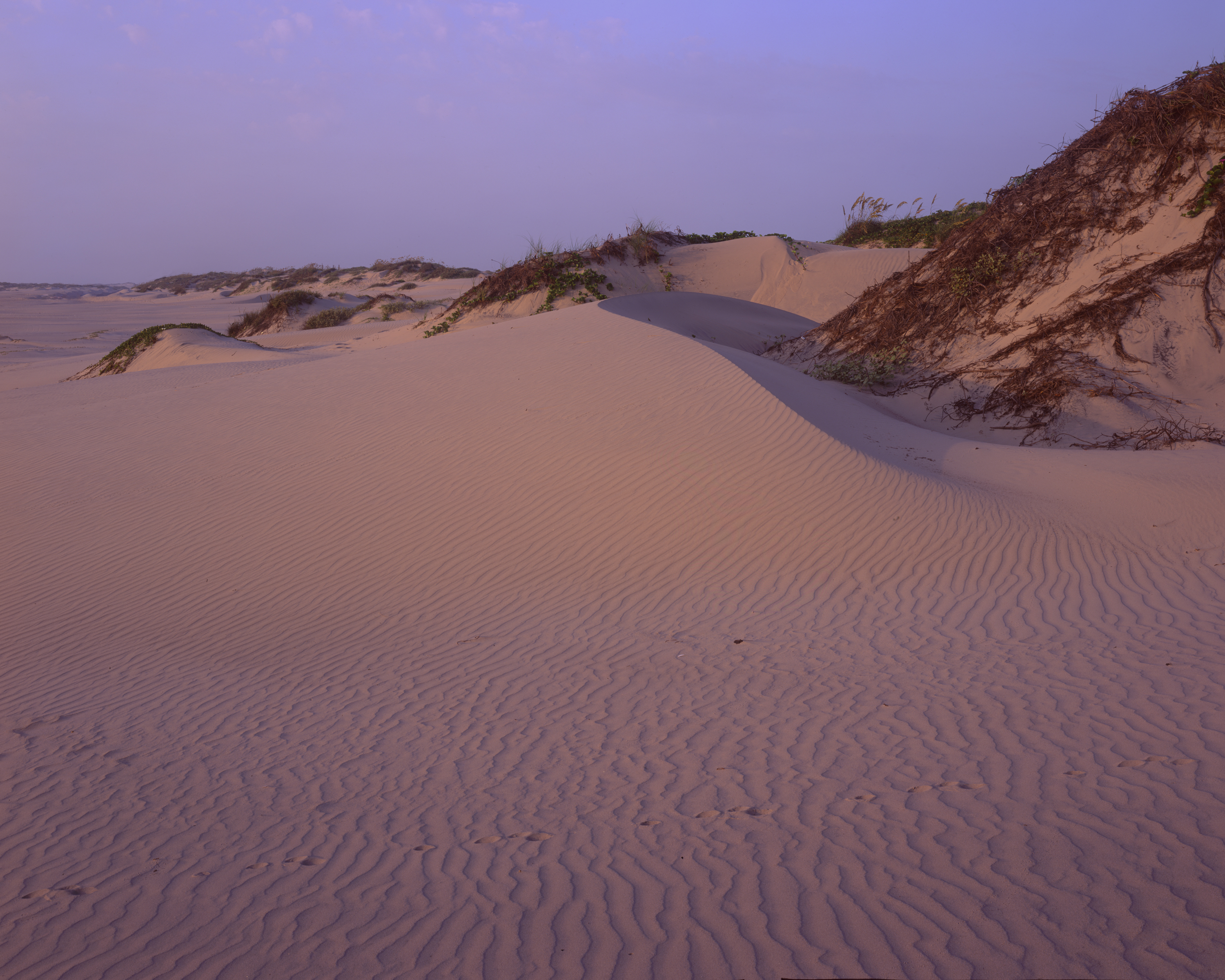 The next stop was the spring break Mecca of South Padre Island. Despite its unruly reputation, in my experience South Padre is peaceful, quiet, and uncrowded throughout most of the year. Other than Padre Island National Seashore and South Padre Island itself, there are few other places in Texas where one can find white, fine-grained sand beaches, including rather large, wind-swept sand dunes as above. To create this image required a pre-dawn rise and hike several miles in the sand after the main northbound road on the island dead ends into the undeveloped seashore. Upon close inspection, one can find a multitude of different animals’ footprints in the dunes every morning. In the foreground here are a jackrabbit’s hopping prints, and, if the image is enlarged considerably, at least two other tracks can be seen. By mid-day, these tracks are all blown away. 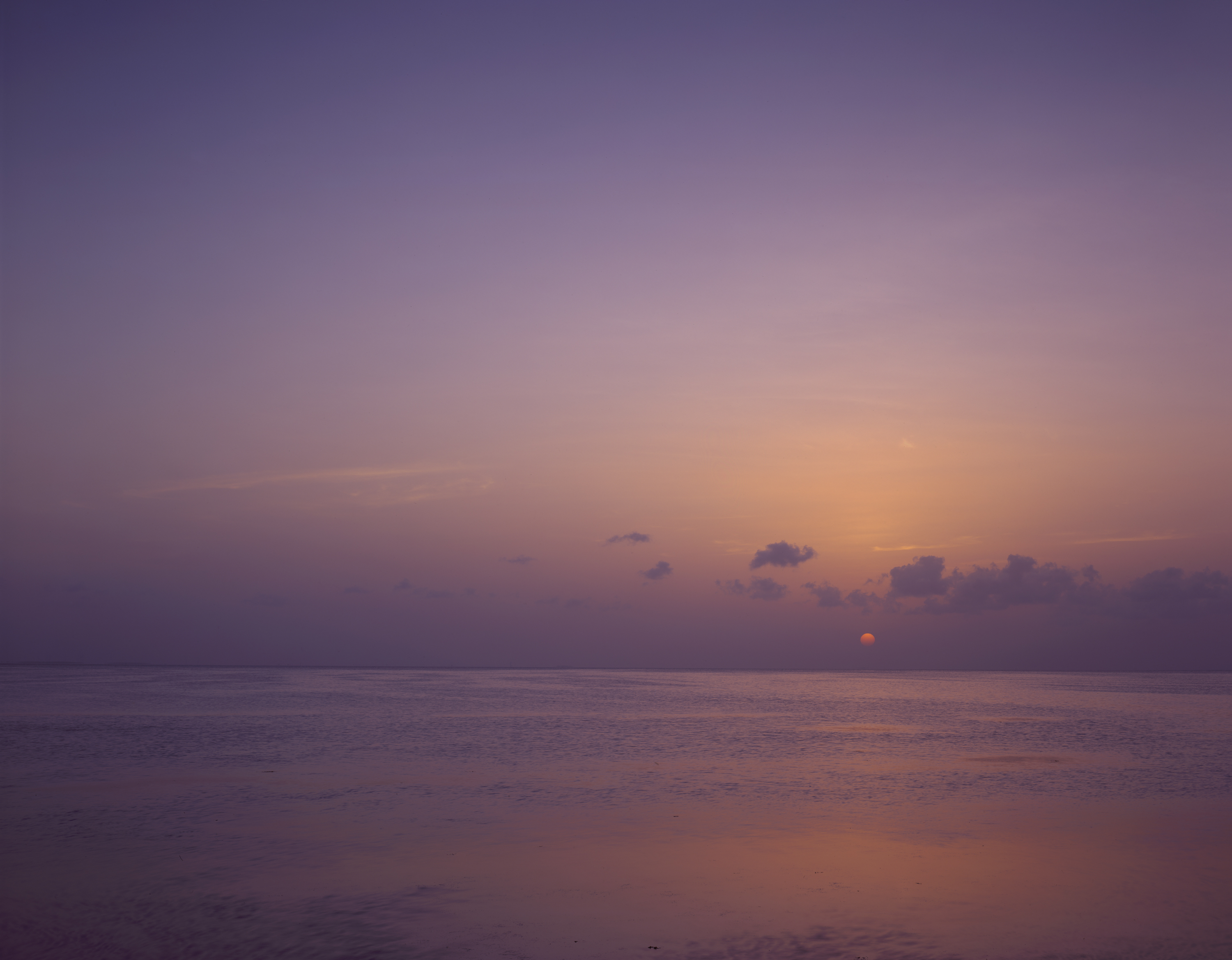 One of the naturalist’s great resources on the island is the South Padre Island Birding and Nature Center. I stayed well after they had locked the gates, and spent several hours stalking birds for wildlife photography whilst carefully avoiding the resident alligators. At sunset, I set up the 8x10 at the end of a pier and used an 81A filter to slightly warm the image, warmth that has rendered especially well in the foreground reflections. It is an utterly straightforward photograph, but the colour palette and the wide open view of the ocean summarise for me the attractiveness of South Padre and the Texas Gulf Coast in general. 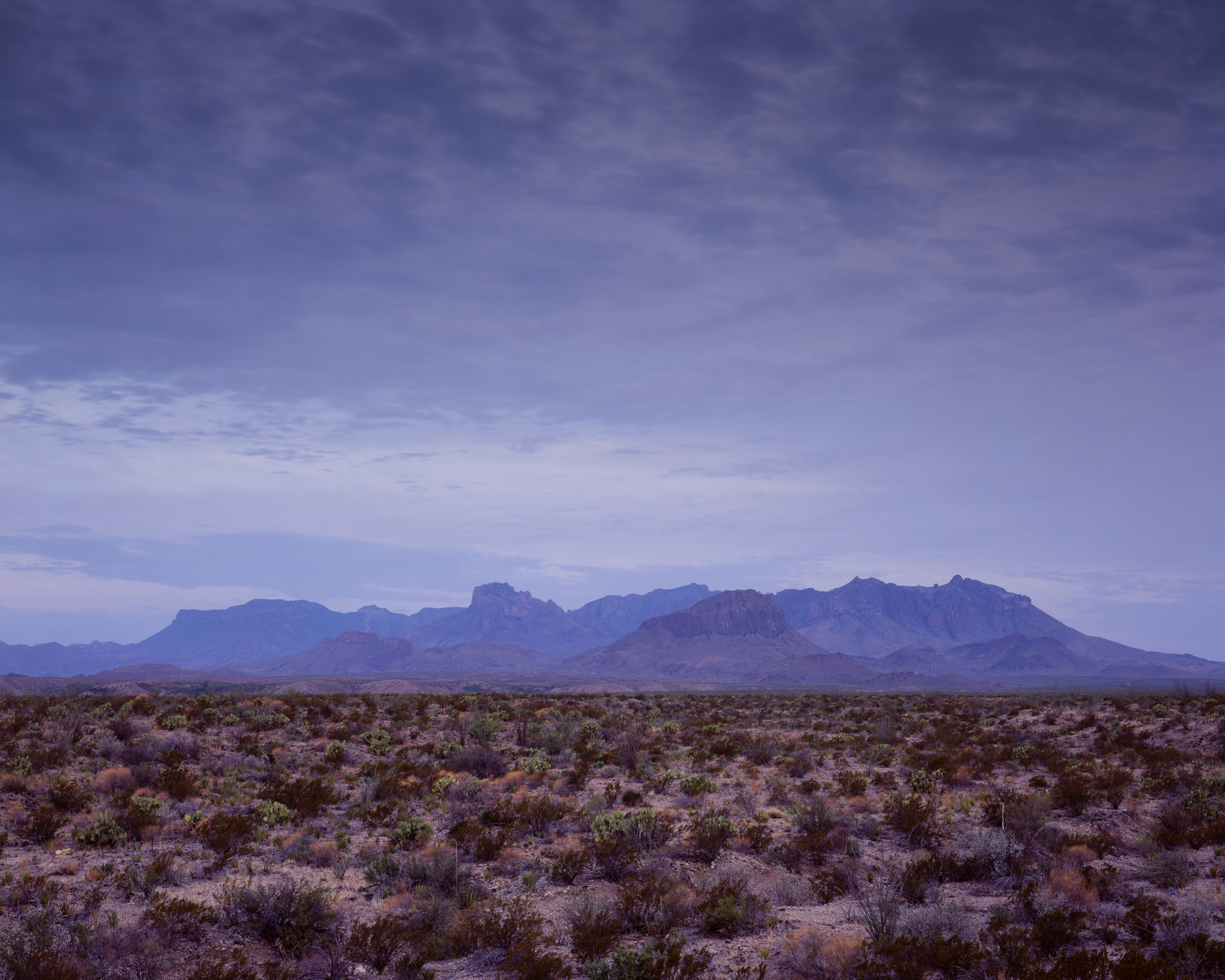 After a week on the Gulf Coast, it was time to begin what I saw as the landscape focus of the trip, which was a week in far West Texas, Big Bend National Park and surrounding areas, and the upper Chihuahuan Desert that include high mountains, deep canyons, and rushing rivers.

In the image above, I awoke hours before sunrise and set up the 8x10 in the complete darkness of the desert, though I could eventually make out the traces of dark clouds threatening from behind.

I used a small degree of front tilt and front rise, metered the scene, set the shutter, and decided which filter might be appropriate. I started to make the walk back to my truck to get the filter bag when a staggering gust of wind blew through and knocked me off balance. I turned just in time to see one of the tripod legs going up, the camera falling to the side like a soon-to-be sunken ocean liner, and the whole apparatus crashing hard into the desert dirt. There was a terrible breaking sound and I assumed immediately that the camera had been destroyed. The ground glass had shattered, though not hopelessly so, and the rest of the camera seemed to be mostly undamaged. Following a colourful burst of cursing the sky, I righted the camera, reset the tripod legs, and tilted and raised the lens where I thought it had been. With only a sliver of ground glass in the rear standard remaining, I set focus, inserted a holder, and took the photograph above.

I did not know what to expect here, if the bellows had been perforated, or something else had broken that I could not see. But the image is perhaps a testament to resisting the urge to not take a photograph just because conditions or circumstances are not perfect. Assuming a modicum of forethought and work has been put into a potential photograph, there is value in the ethos of “just take the picture.” If one waits only for the most superlative conditions, the most favourable circumstances, and forgoes all other opportunities, the photographer will never really know for sure what he or she could have had otherwise. 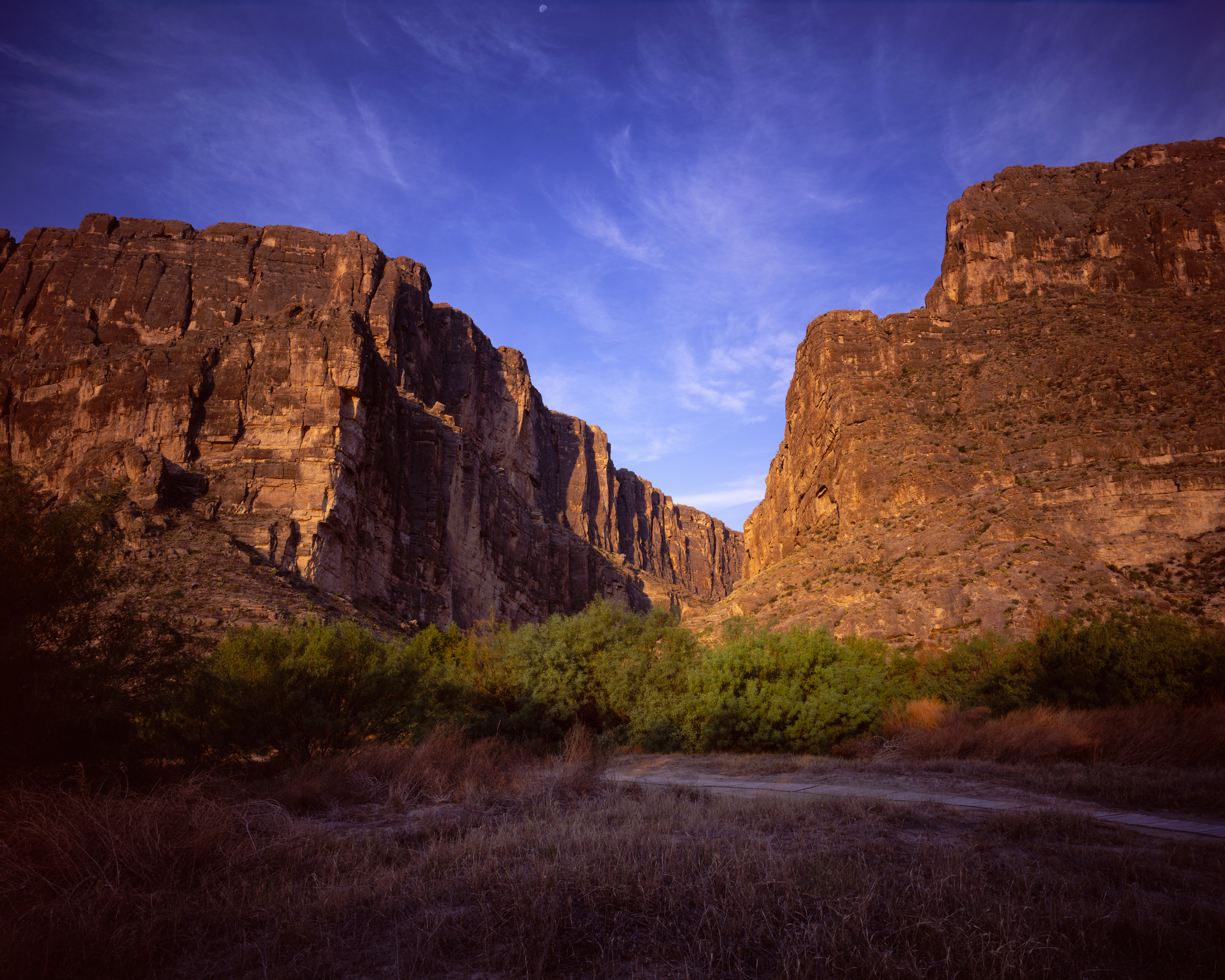 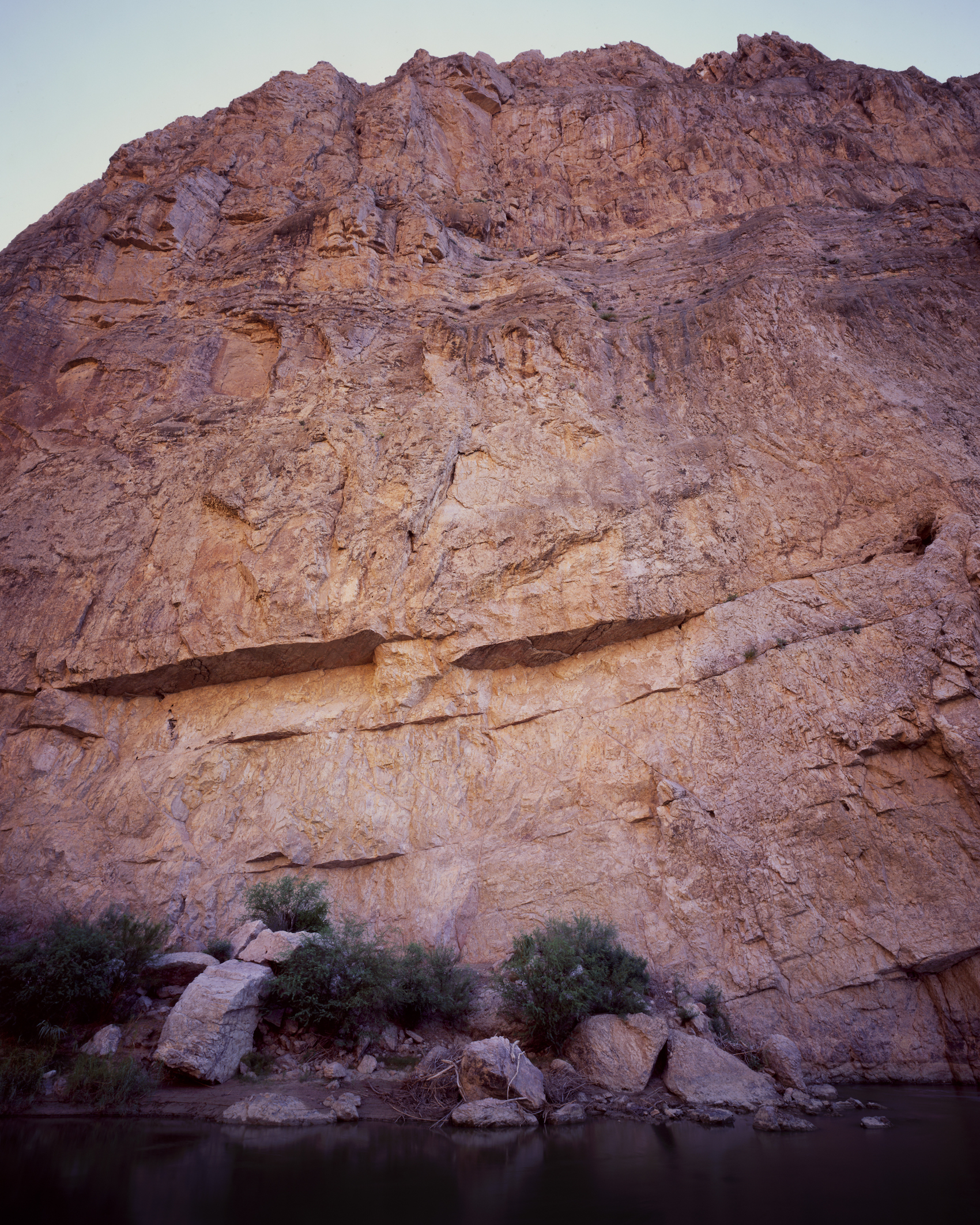 The day after the 2,000+ mile Texas road trip concluded back in Austin, we flew off to Anchorage.  It was my fourth trip to Alaska, and third stay in four years on the Kenai Peninsula. The Intrepid 8x10 made the trip with no problems, even though the ground glass was only shoddily super glued together after the Big Bend incident. Some of my favourite places to explore on the Kenai are the Chugach National Forest, Kenai National Wildlife Refuge, and Kenai Fjords National Park.

All together, these three areas comprise more than 9.5 million acres, a combined area larger than the states of New Jersey and Connecticut together. It is no secret that the vastness of Alaska, coupled with its sparse population, makes it a landscape photographer’s and naturalist’s dream. Unfortunately, the Kenai was dark, overcast, and rainy for most of this trip, lending itself somewhat more to black and white photography than colour. 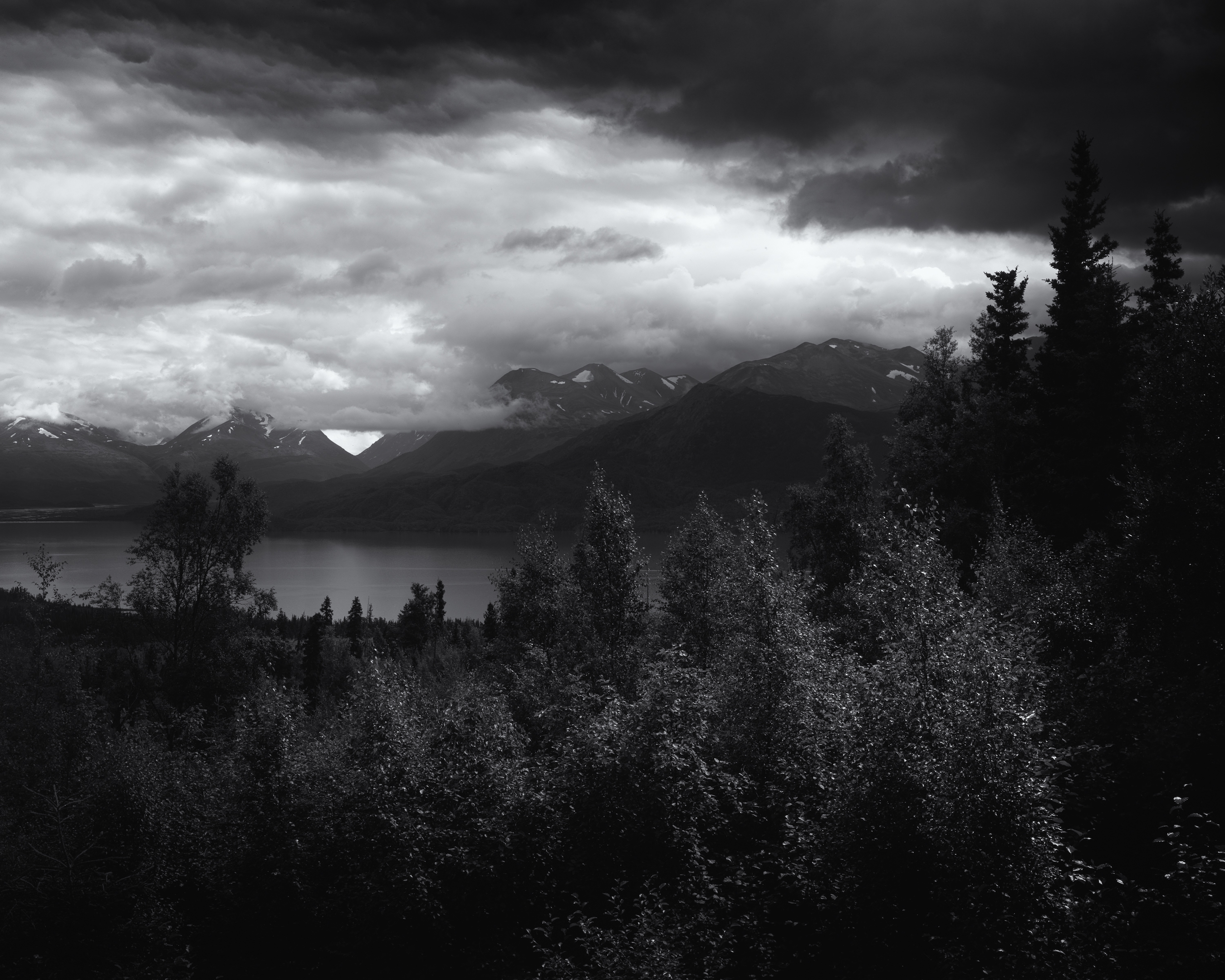 The first image is of Skilak Lake, a huge, 25,000 acre crystalline blue, glacier fed lake, with menacing rain clouds approaching from the Southwest. Skilak is an idyllic place to hike, have a picnic, or wander around with a camera. Setting up this photograph, however, I was keenly aware of sound while under the dark cloth, since this area is especially full of black and brown bears. In fact, the main Skilak tent campground had closed temporarily during this time because of a recent ‘bear incident.’ Just after this photograph, I actually came across a small black bear foraging on the side of the road. 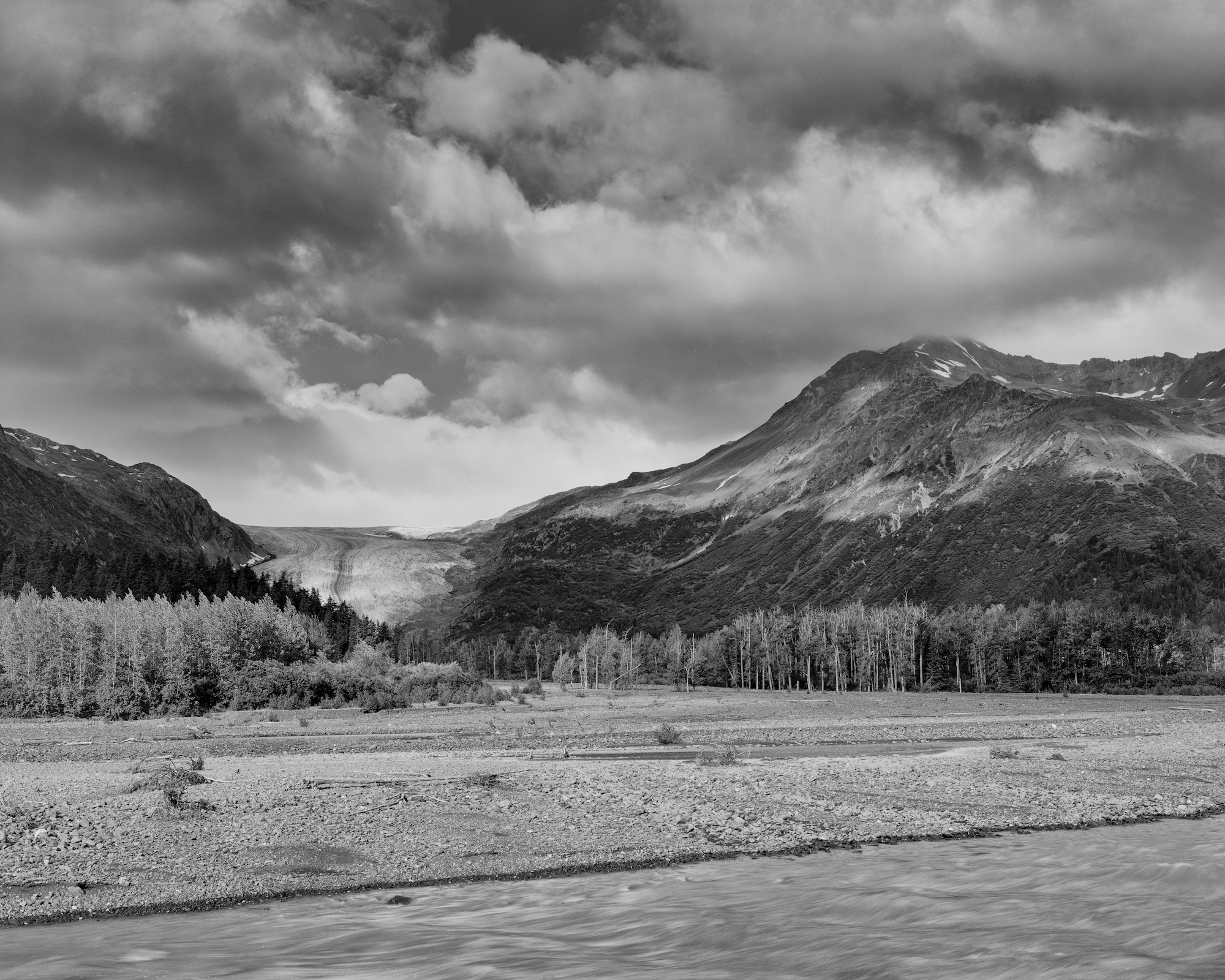 The second image is of Exit Glacier, the most easily accessible glacier in Kenai Fjords. The wind made camera setup close to impossible though and a number of disasters were averted at the last moment. Even with a substantial tripod, keeping everything upright is one of my real challenges with 8x10 in the field. 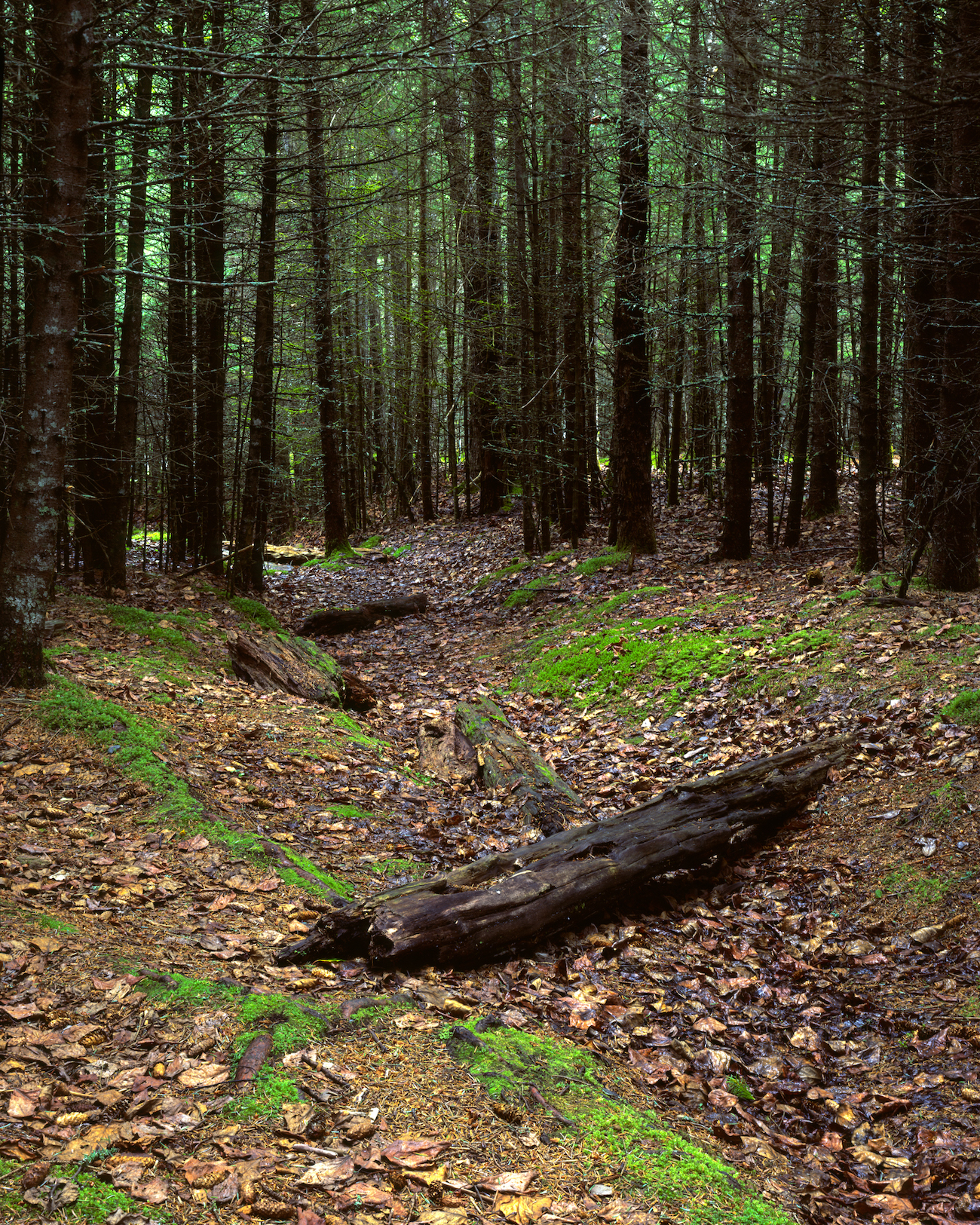 This area on the shore of Kenai Lake caught my eye because of the subtle green glow of the canopy just after sunrise, but the entire scene was woefully dark. Thus, the exposure here was in the neighbourhood of ten minutes at f/45. Despite that, the camera held secure focus throughout the exposure, as the image is incredibly sharp at significant magnification. The Intrepid 8x10, like any 8x10, can require a degree of fiddling, but assuming it is fairly level to begin with, once the camera is locked down it seems to stay there securely. 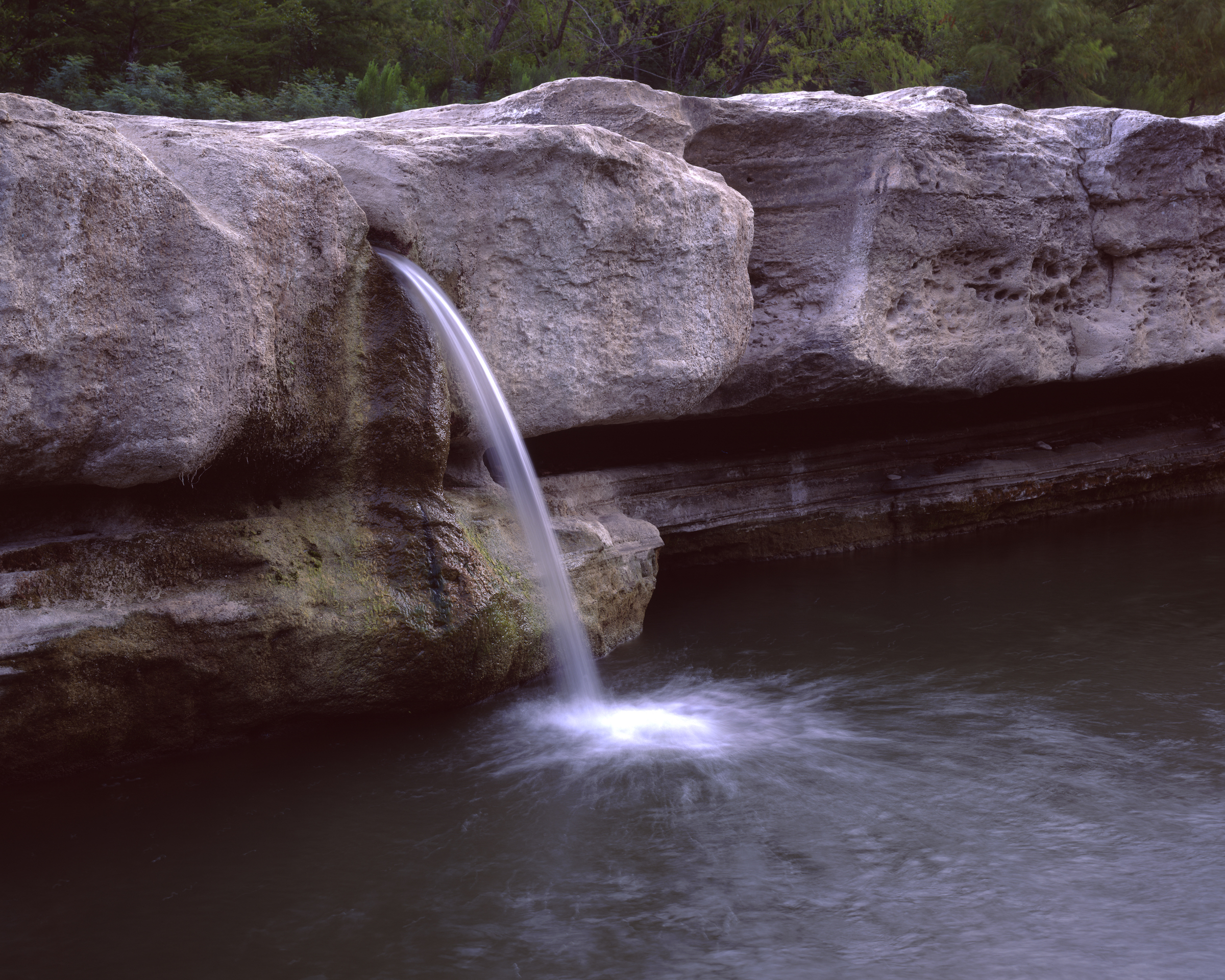 I took the Intrepid 8x10 on thousands of miles of flying then driving, and dozens of long and short hikes, and after this extensive use I plan to keep it as one of my go to large format cameras, especially for hiking and backpacking.

The Intrepid 8x10 is among the lightest 8x10 field cameras ever made and it is also remarkably small in overall dimension. It is ideal for travel and outdoor use, and in my case, long international travel to rugged destinations for hiking and backpacking. For the vast majority of landscape work, it is more than adequate as long as one uses a bit of patience and perhaps a bit of creativity.  But what large format photographer does not already do that.