There’s one question. Asked even before we are born. Boy or girl?

A question that upon answering, instantly provides a full set of rules and expectations on how to dress, what to like, how to express yourself, and what to aspire. But what if it didn’t?

The series, ‘My Own Gender’ explores the extensive grey zone existing between male and female, retelling the stories of those who defy society’s gender spectrum with every form they fill out and every bathroom visit. While ‘My Own Gender’ started as a stand-alone, travelling art installation, I felt that the stories to tell required more than just still images. To capture the full spectrum and all its subtleties, the project includes a book, multiple documentaries, an online platform, a podcast, and an educational programme. 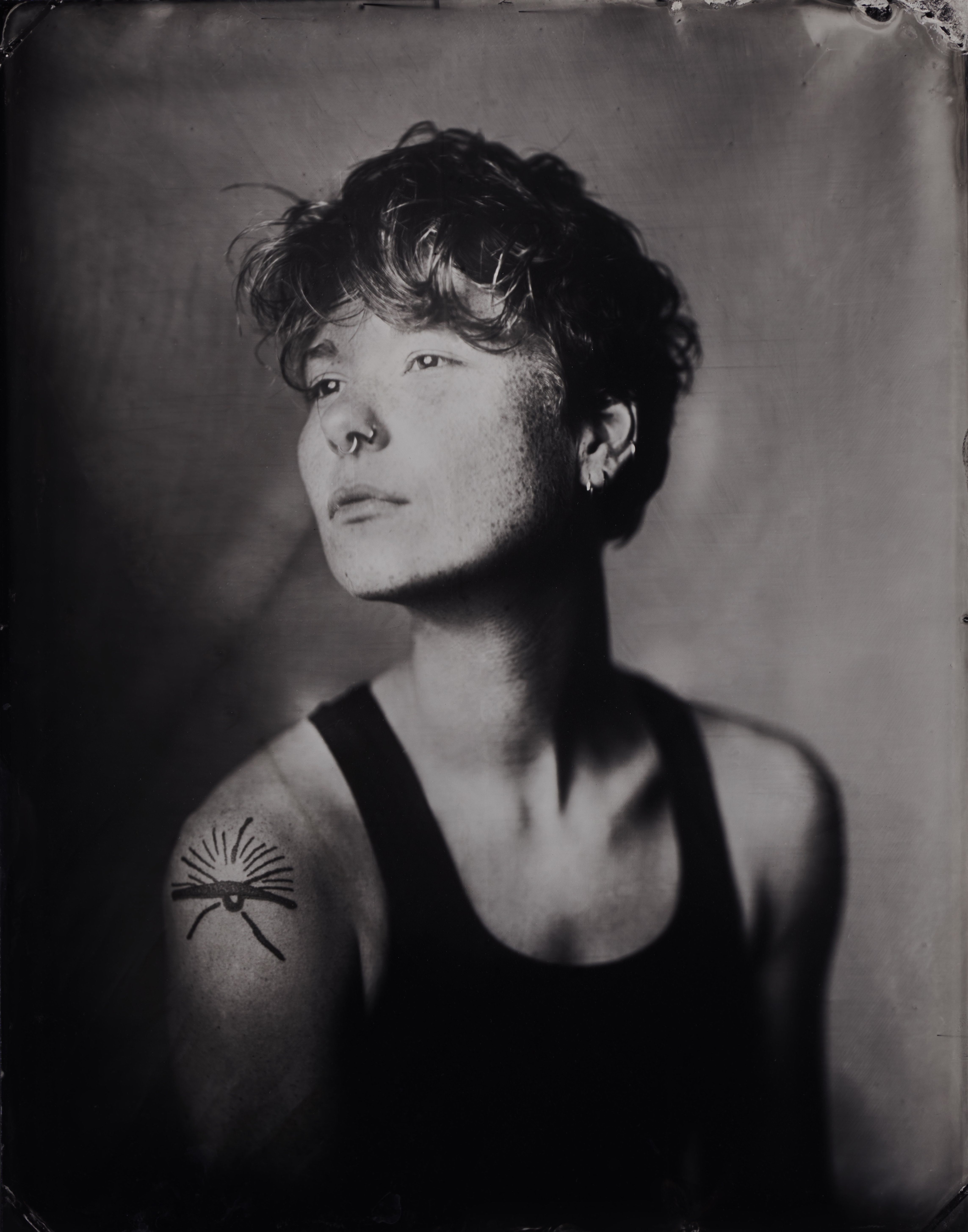 Can you explain your photographic process and outline the series?

I worked with models who are redefining society’s traditional idea of gender spectrum. I capture them on black glass through collodion wet plating and share their story in a short interview in an installation made out of steel. No matter what their pronoun may be. No matter old or young. No matter background or religion.

When and how did you get into shooting large format, and in particular working with collodion?

In 2014 I started working with collodion wet plate and large format as a whole. Since I started I have loved every shot and every mistake I have made. 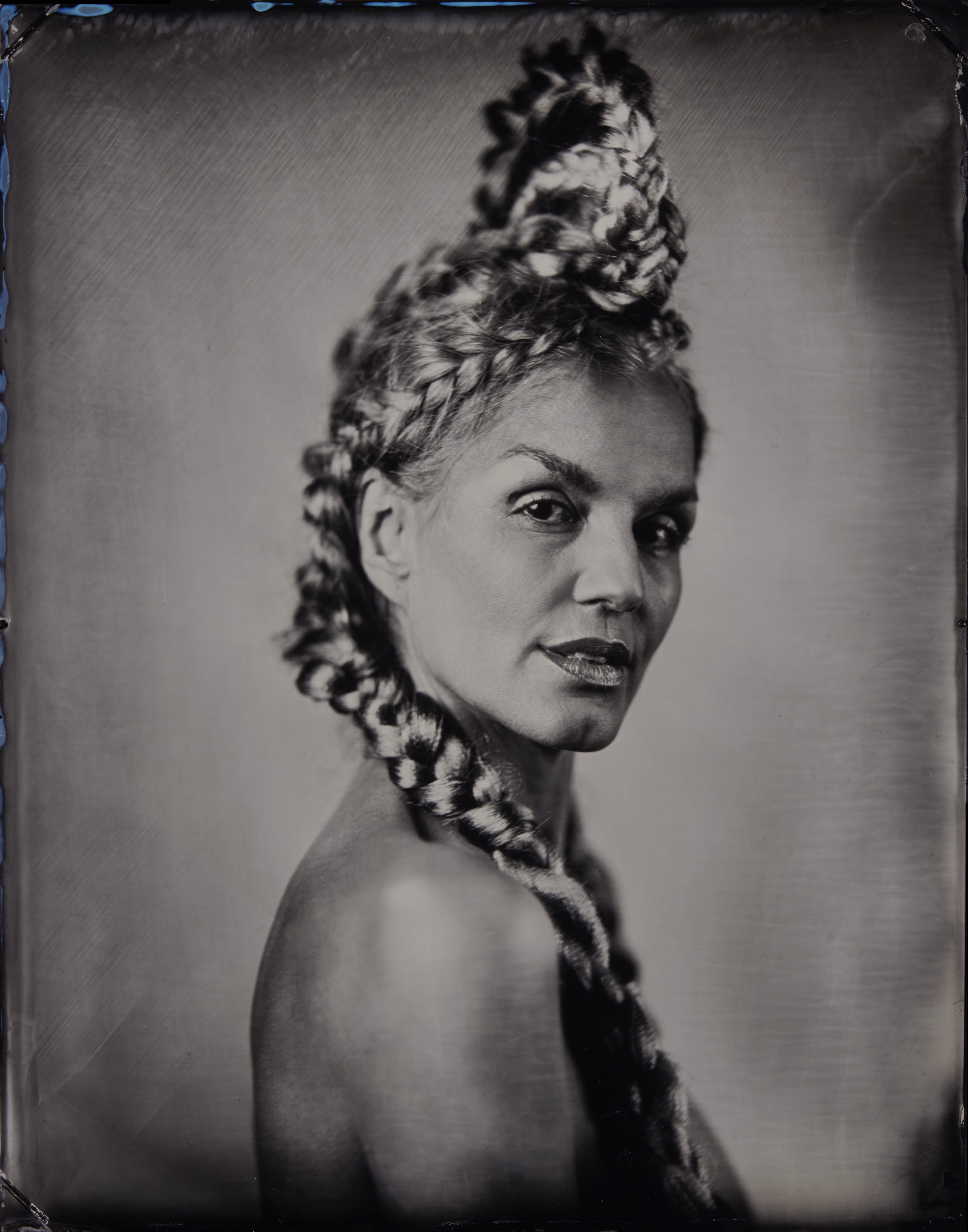 Working with Collodion gives your series a very timeless feel. What else inspired you to use the process over film?

There is a long exposure time with the collodion wet-plate technique, it takes up to a few minutes sometimes. This creates an elusive interplay between the photographer, subject and the elements, as well as a precise chemical process. Every single speck of dust, every drip of collodion, every second that is passing affects the final image. Even humidity and temperature play a significant role in the process.

I am inspired by the ‘imperfectionist’ style of Sally Mann. I embrace this historical method of photography and its means of co-creation, where collodion wet-plating builds upon impeccable chemistry between the photographer and subject as well as the technical aspects involved. 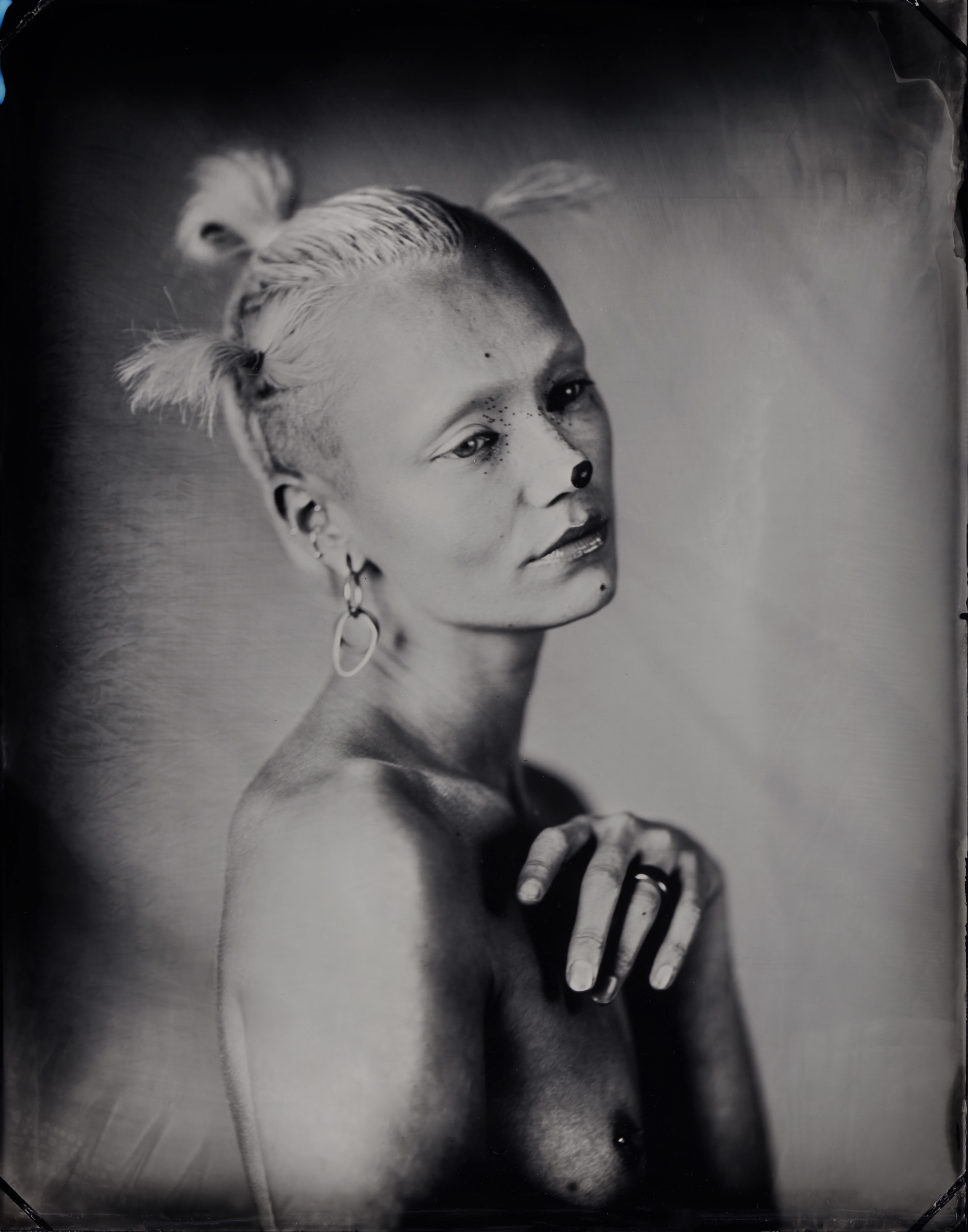 How much time do you have with each model?

I spend around 4 hours with each model. Sometimes it takes up to a day. For My Own Gender I interviewed every model as well which was a very important moment in the process.

I think because of the slow process you become a great team with your model and the make up artist. You have to work together to make it happen. On set we are all very focused and happy to be working, and spending so much time together. Has gender fluidity always been an area of interest for you?

Gender means something different to everyone. Really, I have lost track of the times I have asked people what it means to them, but none of the answers have ever been the same.

Technically speaking, gender is considered to consist of three parts: sex, gender identity and gender expression. I have learnt everything I know about it along the way, from research, natural curiosity, and most of all, from the models who’ve educated me throughout. 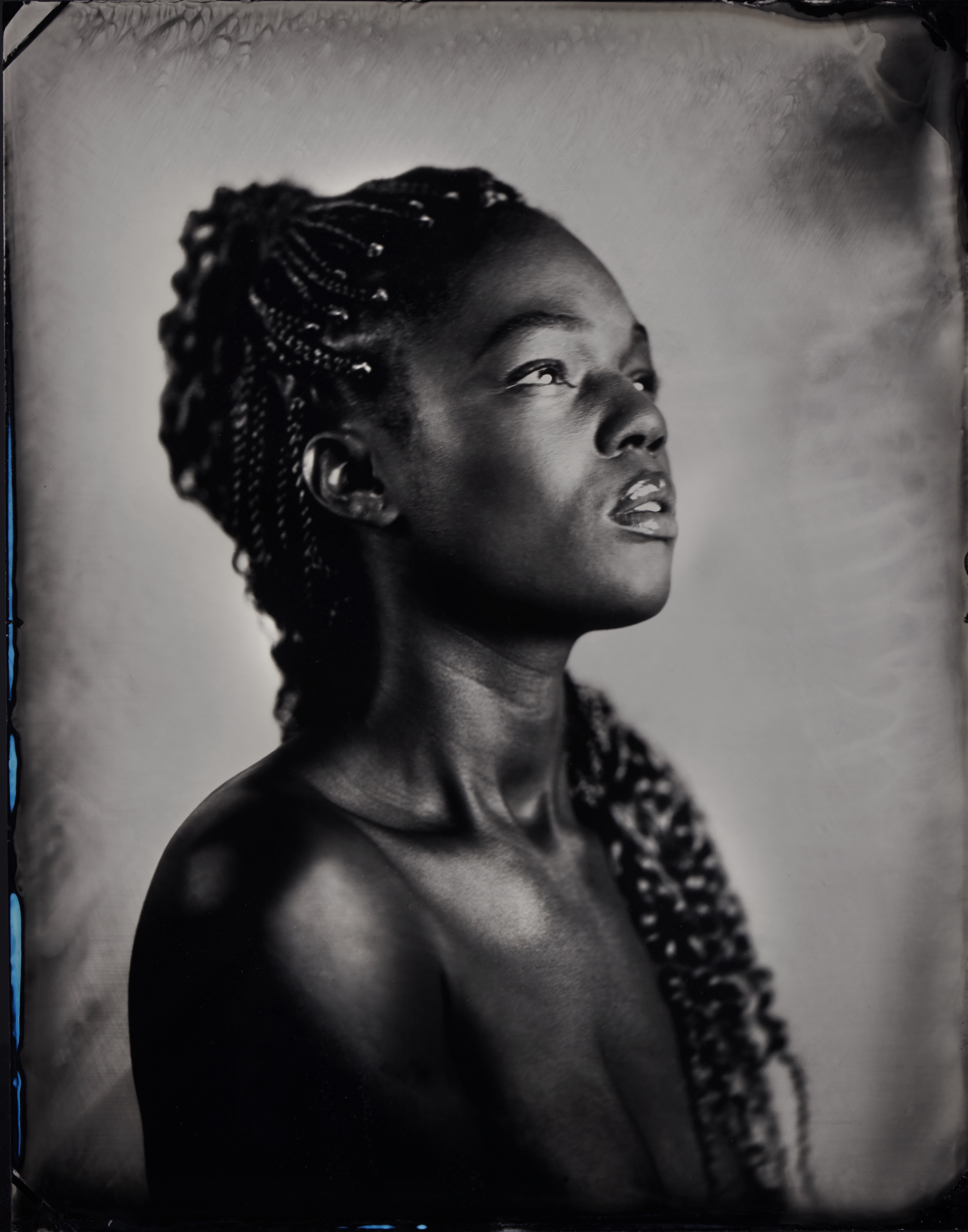 Why did you decide to create a film as well as the Collodion series?

Up to this point I exclusively captured the stories of my models in photography. But I now plan to deep dive into the world of moving images for the first time with the My Own Gender short film. In collaboration with Joey de Leeuw, I have recorded the intimate fragments of life in atmospheric scenes that showcase all those unique nuances that exist among those who don’t define themselves as solely male or female. The film will be showcased as part of the #MYOWNGENDER art installation and will be released as a larger documentary on the topic of gender. I felt it was time to release a film. 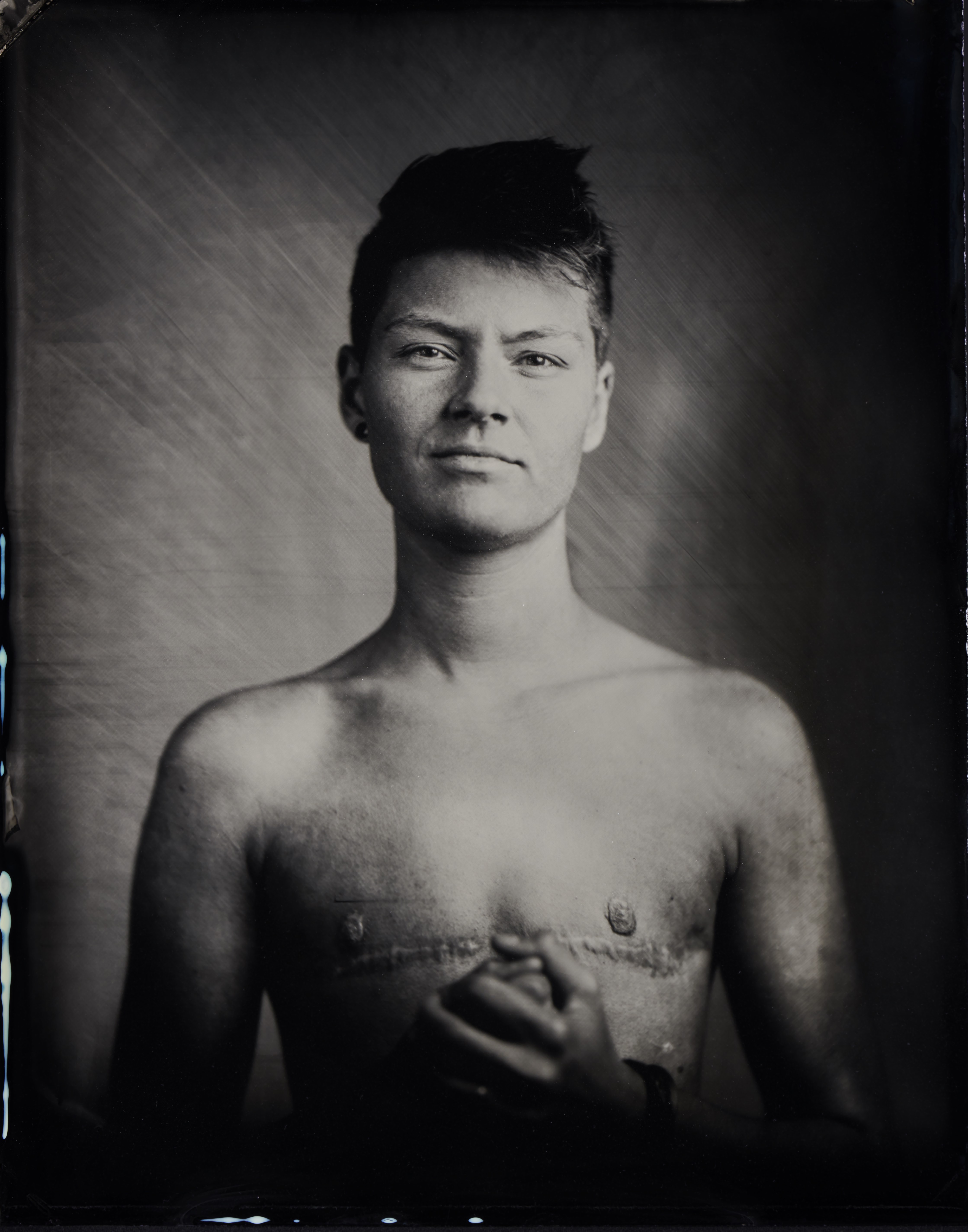 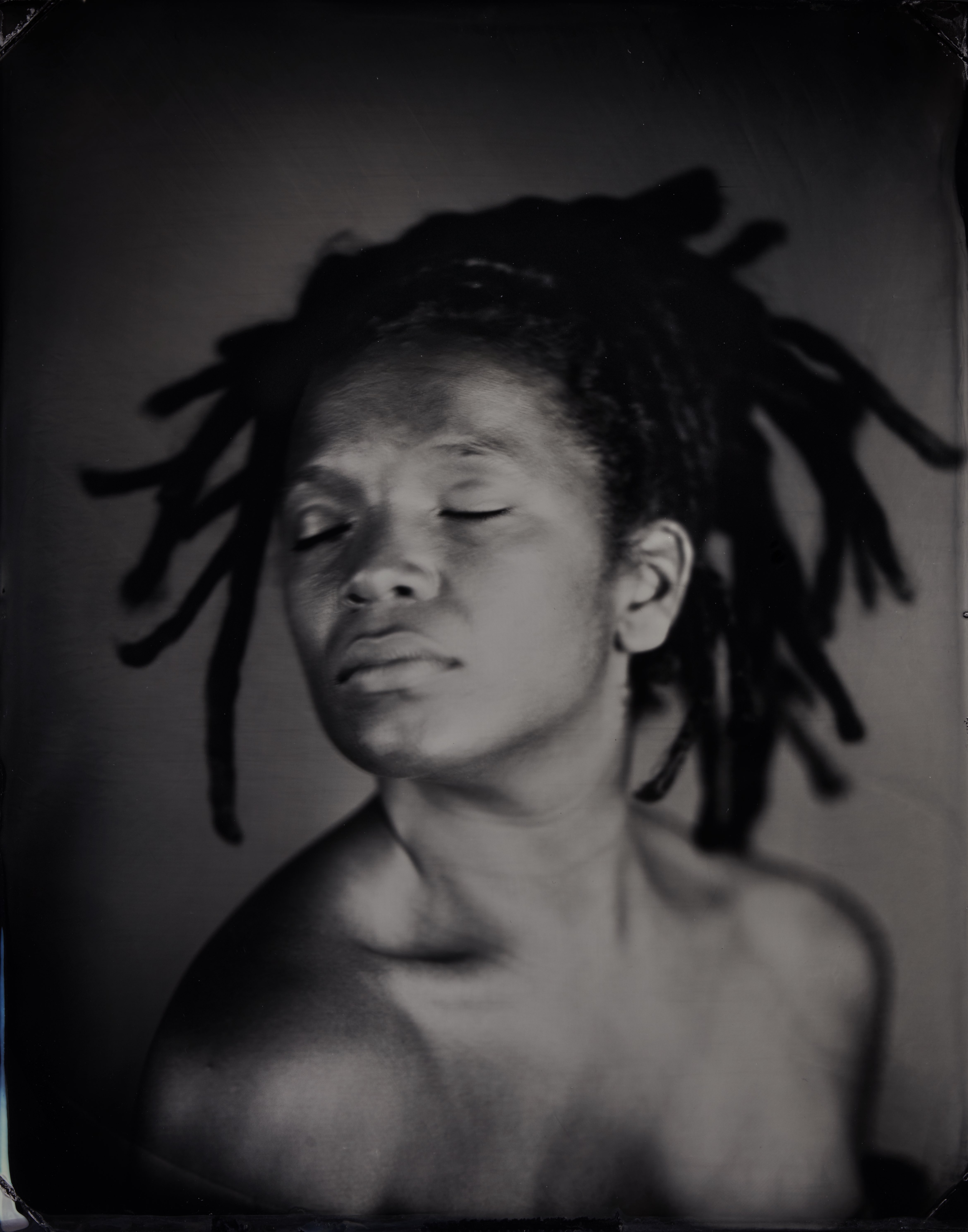 When is your book released and do you have plans to continue the project into other mediums?

The My Own Gender book bundles more than 30 shades of gender in a luxurious design. The unique publication builds upon the art installation with new images and personal stories by both the models and by me. In collaboration with Jord Noorbeek and Rob Stolk, the book is planned to be released in September 2020.

You can see more work by Sevilay on her website and Instagram, and find out more about this series, the upcoming book and documenary at myowngender.com.