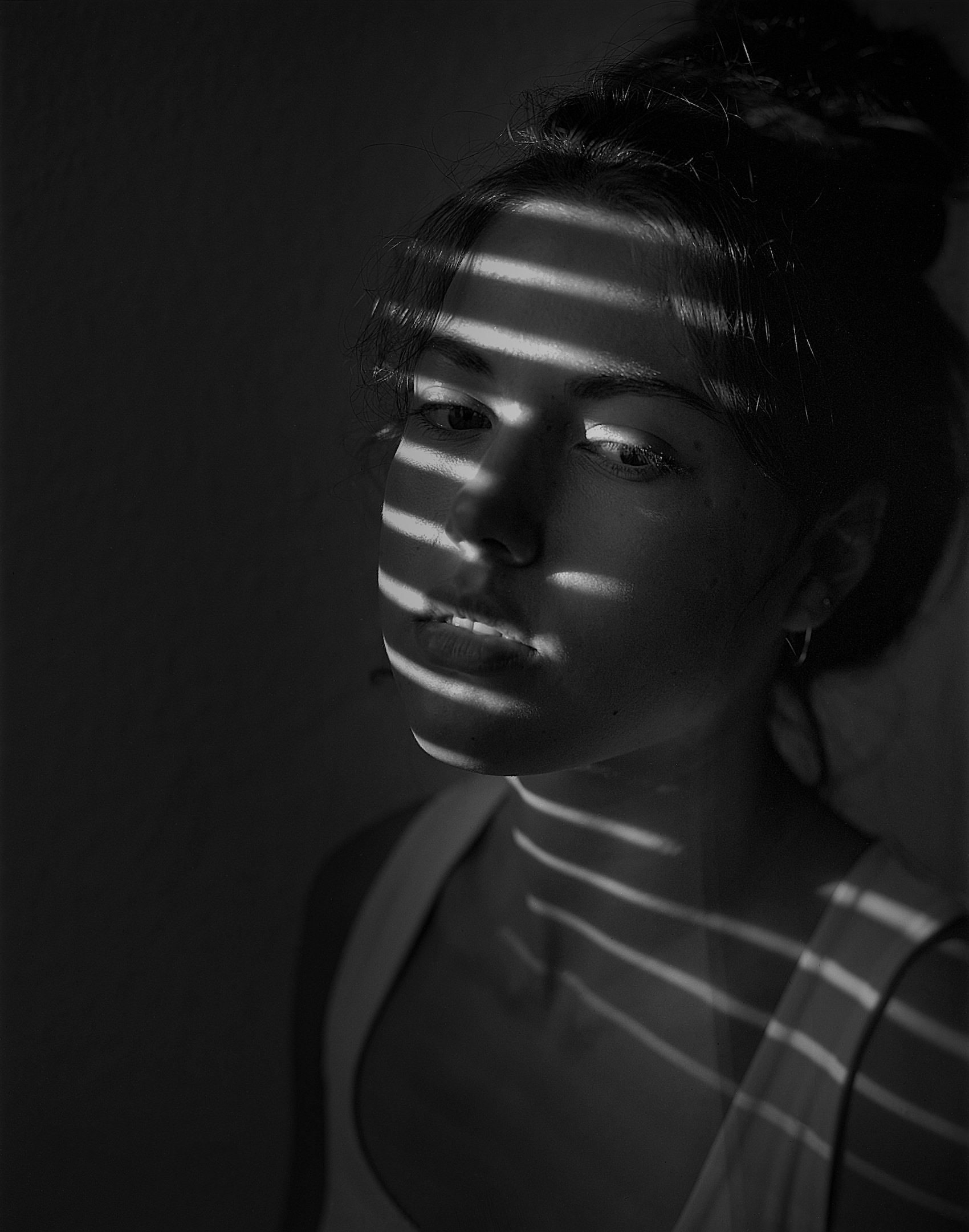 It was summer fifteen, an unforgivingly long, hot and dry day, glimmering asphalt, my road-trip playlist jiggling out of the speakers left and right, no AC. The air, a humid mixture of me, fresh asphalt, gasoline and generally blasting excitement.

Destination: Berlin (with a short stop at a wedding). I had just graduated from high school, which quite frankly wasn’t why I was so jittery and my father was getting married- again- which I can safely say, definitely wasn’t it either. In fact, a few weeks in retrospect I had just watched a motion picture called 'The Secret Life Of Walter Mitty'  for the first time. The work’s pretty much a tribute to photojournalism and it’s heroes, film and yes, cameras.

I did my research right after the movie. I was hooked. Inspired, and got my first film camera - a silver Nikon FE.

So there was me, nineteen years old, in a car, driving to a wedding, excited like a little kid. Not that I cared about the wedding, I cared about taking pictures - and not that I knew anything about taking pictures, but that camera quite simply inspired me to overcome social anxieties, laziness and everything else to go out and shoot. It was a beginning, an awakening.

Three years later I am quite sure to have reached some destination. 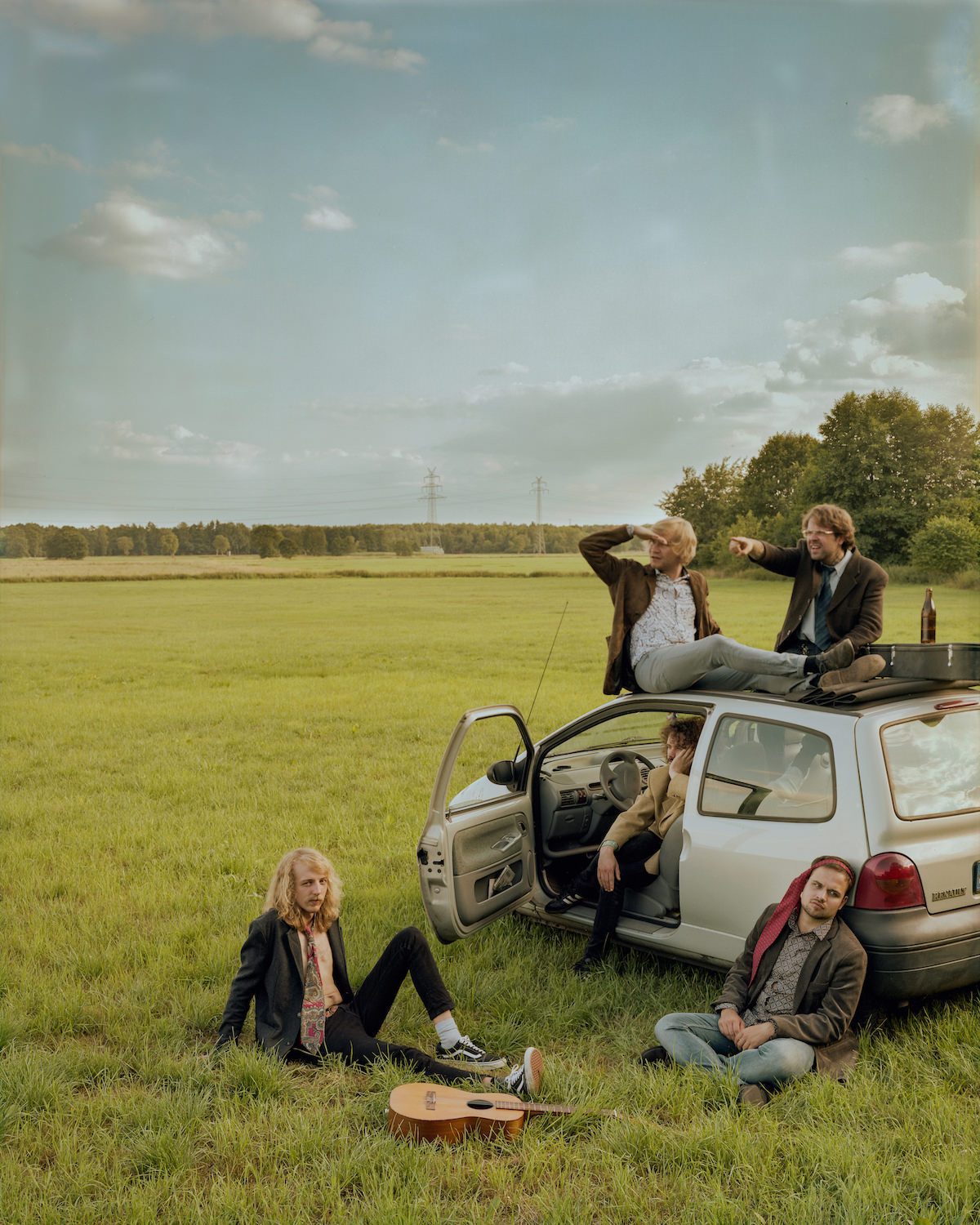 Getting inside my head

I am warning you

After a day without a good train of thought, an idea or some creation

You won’t be able to help yourself

You’ll see the day as wasted- 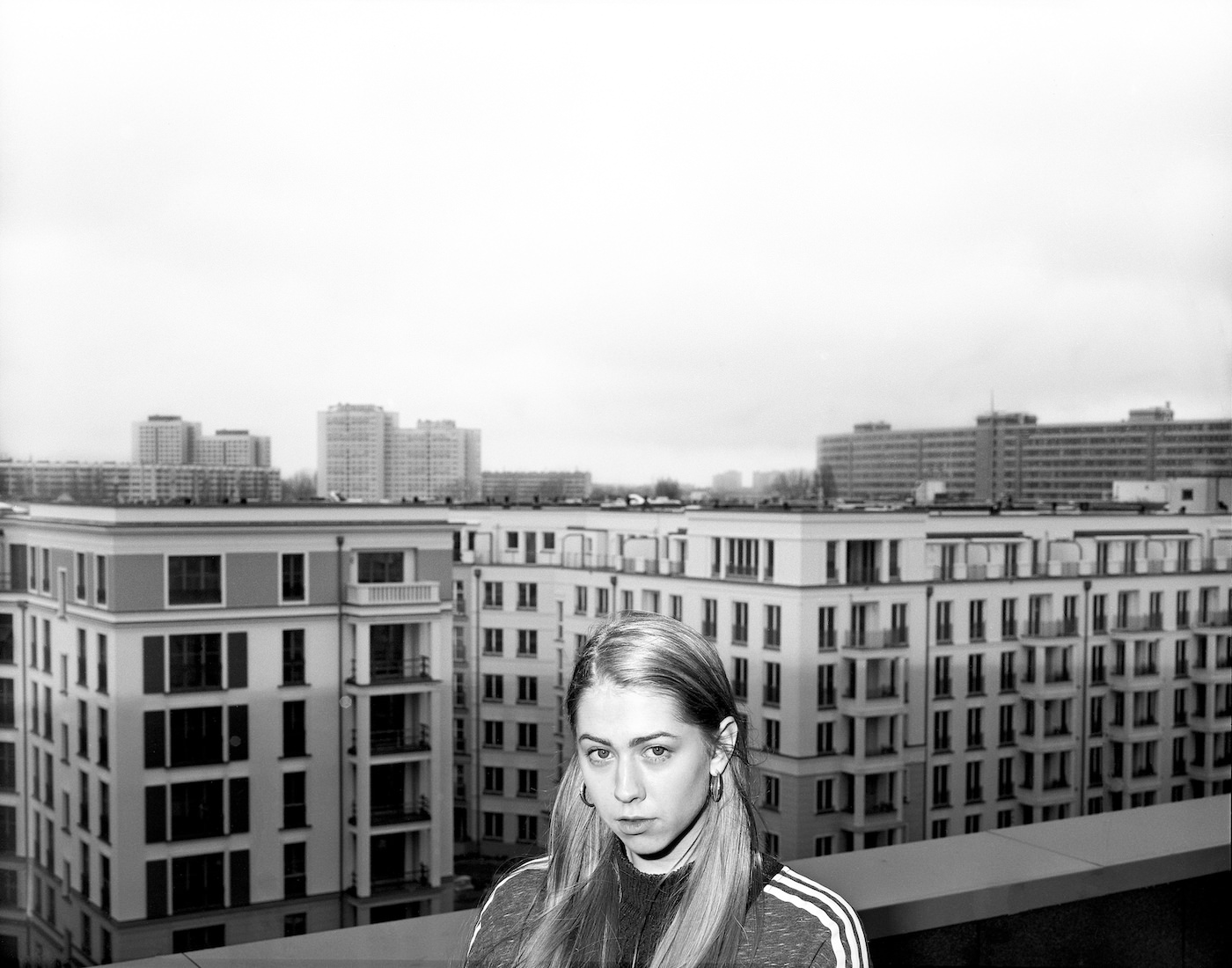 Being able to see a good shot and recognise good light

And not having your tools with you

You’ll hate that too

and won’t leave your apartment without a camera or pencil or whatever.

Because you’re completely and utterly at your minds mercy

Because you can’t help yourself

Because you can’t un-scratch something inside of you

Once you grab a hold of it, you go with it and never let go. You either put your heart in it or don’t try at all. You kind of sign with your blood. You make a commitment. You go all in. Part of it is about losing yourself, losing your head if you will, and re-discovering it. It’s not some kind of job you commit nine to five and then just switch off, after you put both feet over your doorstep. You cannot switch it off. Being an artist has always been a way of living. A life of getting inspired and inspiring others. For that I feel extremely privileged and grateful. 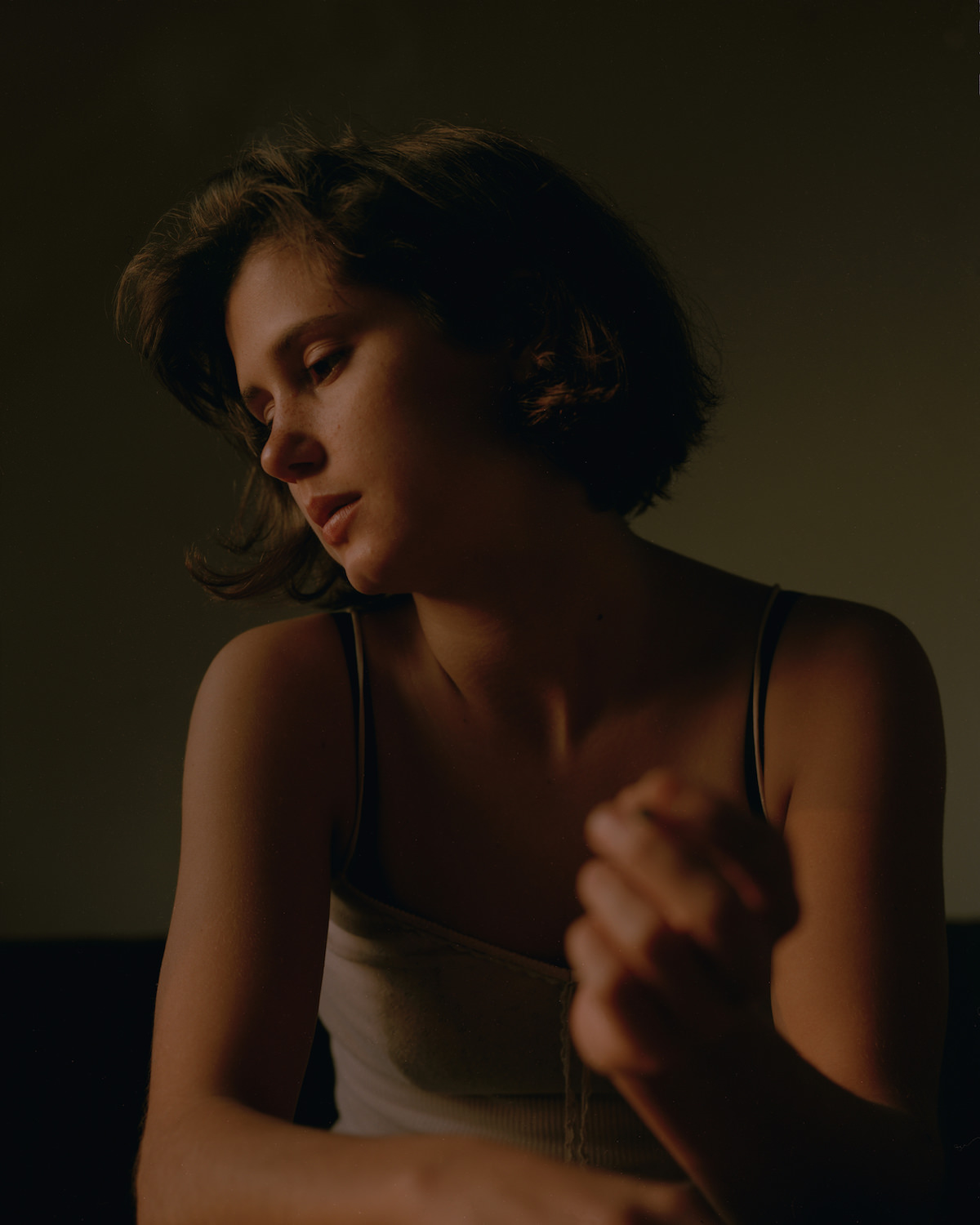 I am Melvyn Ivy and I am a documentary and environmental portrait photographer. I’ve been shooting for about two years, having a dedicated work philosophy since one year and producing work that I still like since yesterday (haha). Comfortable in an observing position I focus on documenting subjects in their relaxed and authentic environment, utilising purely analogue processes.

With film I have the perfectly slow work process that acts as a visual filter — helping to bleed out everything redundant and lets me search for that special moment of revelation more attentively. The pace of my work process usually helps to create trust and an intimate situation, which is everything in revealing the subjects most open and true self. I’d usually want to get to know the character in front of the camera first, if possible. The ultimate goal is creating something that is revealing and therefore empowering for the subject and relatable for the viewer.

Planning to shoot people ‘one way’ is impossible because every time it basically turns into something unimaginably different. It’s always collaborative. Something I’ve always craved in general. When I look for character and their environment it is important for me to get inspired by both. I found that just one usually doesn’t satisfy me.

The part of actual image taking is by far the smallest part I spent with the subject. It’s usually take one or two shots, rarely more. Try to communicate that you’re done after just one shot: it's really revealing and kafkaesque at the same time nowadays. Photography’s not really a good medium for storytelling, rather implied storytelling, but for me, with multiple subjects this changes (a little). You can contrast those, stage and block. Lay out small elements/ easter eggs that one doesn’t perceive by one’s first glance. As far as inspiration itself is concerned I absorb anything I can: music, literature, song lyrics, motion pictures, paintings, architecture, people… 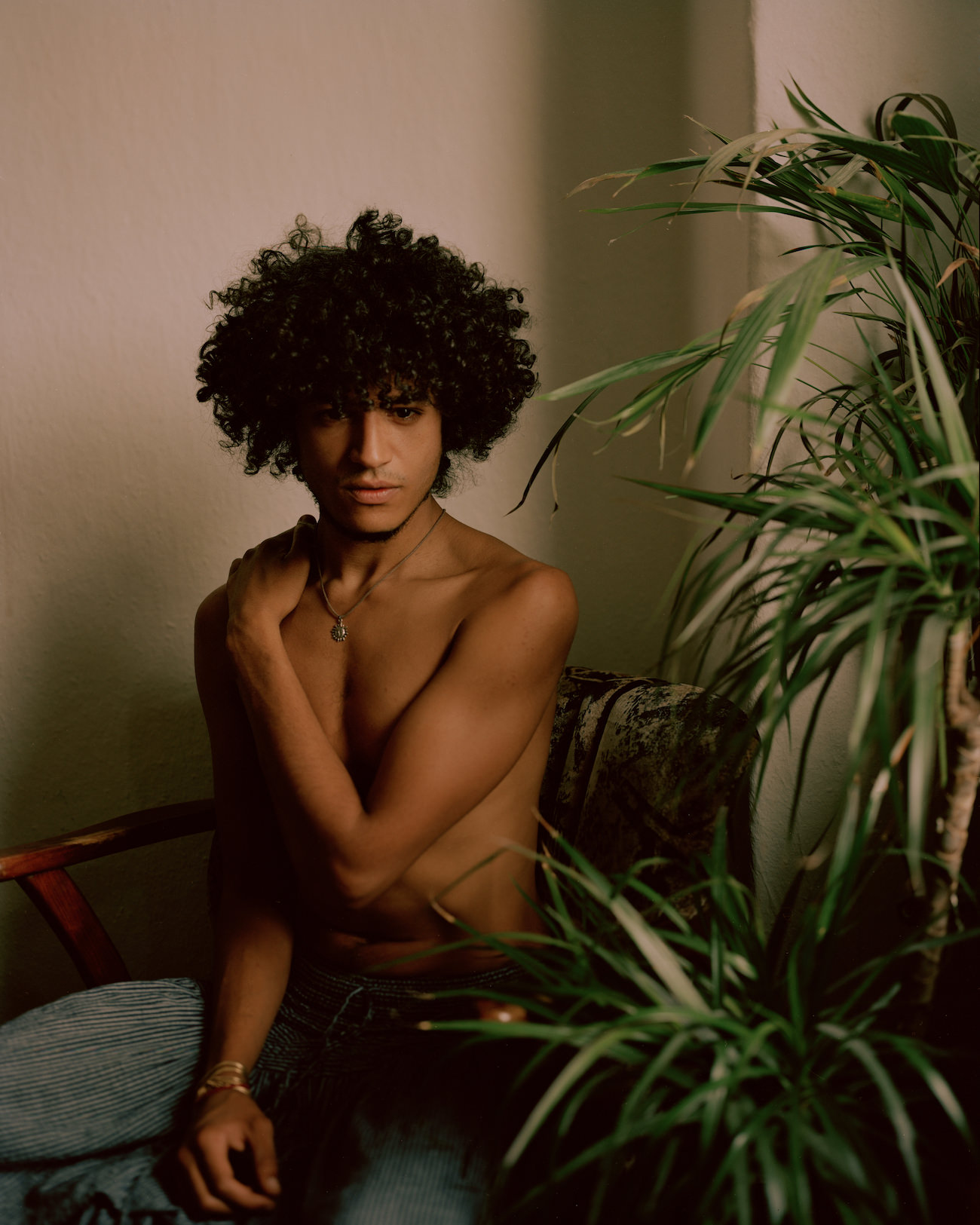 YNS  (Younes) in my armchair

What do I shoot?

I can’t really tell you much about why I shoot certain things and I think just that is a good place to come from. I truly believe creativity comes from the unconscious and has little to do with your intellect. For me it’s all about getting into a relaxed state of mind, or affairs, that you deduce would trigger your unconsciousness. I think choosing your environment carefully and consciously is one of the most important things. Visiting places and listening to the feeling in your stomach, trying to stimulate an unconscious creative spark.

You develop a sense, a feeling in your stomach, a fine nose, but it is never just a logical thing, this creativity. There’s no formula. If it were a logical thing, all the logical intelligent people could do it. It is maybe more about openness and honesty to ourselves. But also forcing ourself to practice (this is essential for progress) to find out what works. Allowing ourselves to fail, and try. 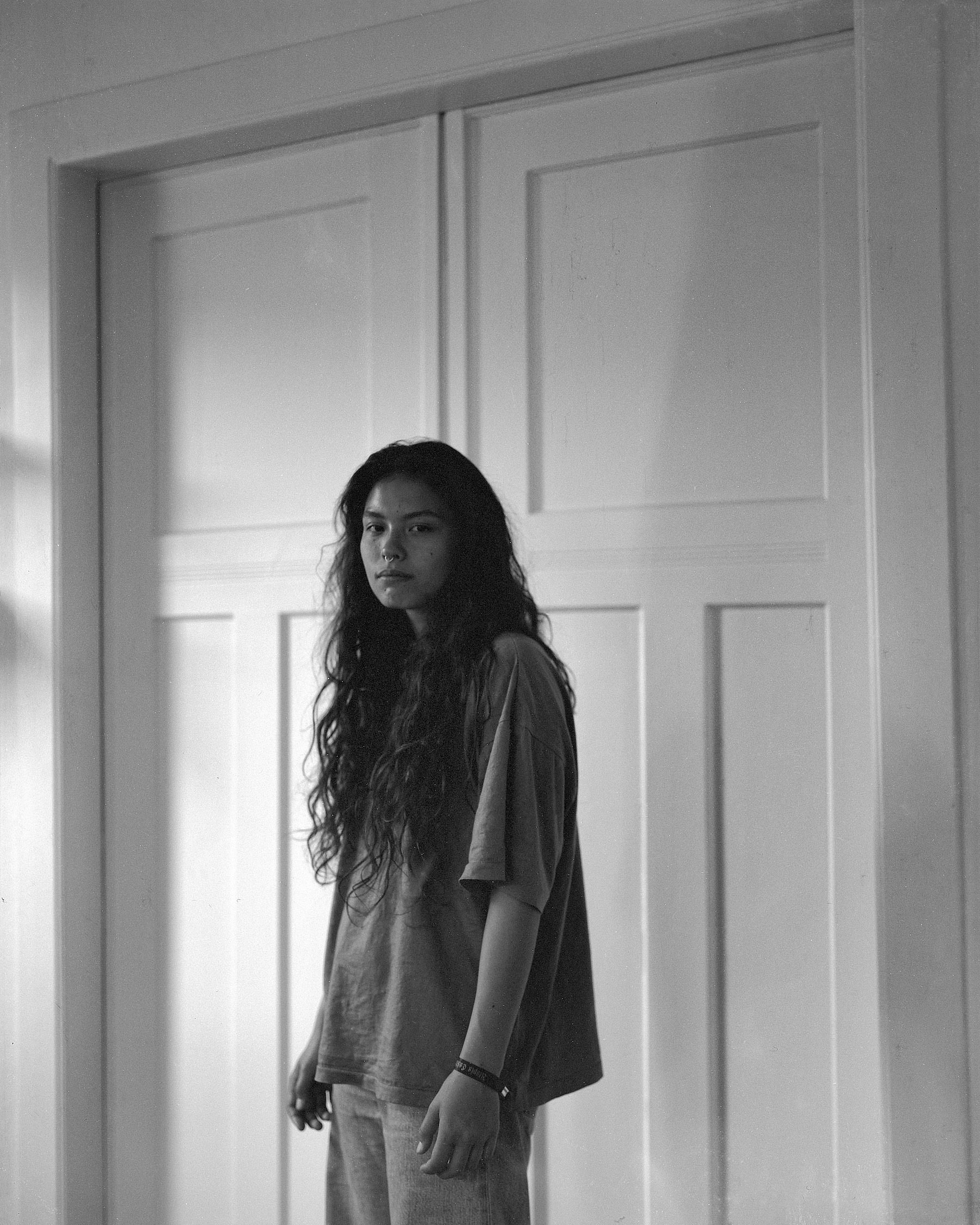 Get a daily routine, beat resistance and sit down every day, even when you feel uninspired, tired, exhausted, sad, angry, heartbroken. If not to say, especially sit down when you’re feeling sad, angry or heartbroken and process. Instead of ignoring and repressing everything inside, you might as well take everything bad and turn it into something expressive.

And when we are done, maybe not just we will benefit, and understand better, but ideally also everyone watching will take something, anything from it.

Getting out of your comfort zone can benefit your style as well. I guess I don’t do the one-trick-pony-instagram-style because I tried many different routes and did not scrape those ideas right after they surfaced just when they weren’t the thing I was ‚good‘ at.

I wonder how many

need to go on vacation

To get themselves shown the great beauty

to look up from their feet

and get lost on their way home deliberately 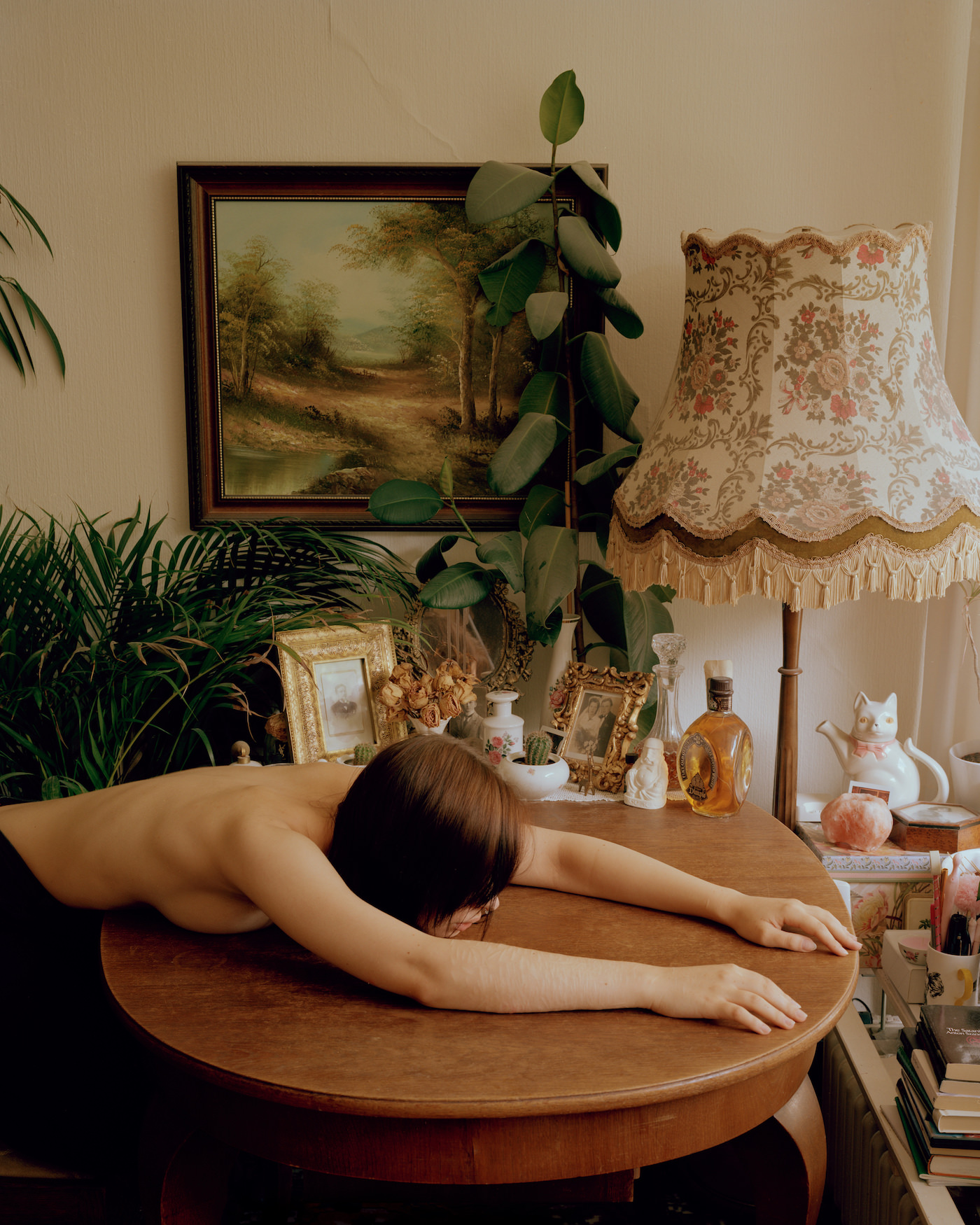 Chrissi at her table

“The weird thing is I feel like I’m shedding skin so fast and I’m growing and I’m becoming a new person so quickly... I just have to sit down and listen to the ideas I’m having... and I’m not worried” - Justin Vernon

Large format feels like an answer I did not know I was searching for, for some time. Probably ever since getting my first medium format camera and realizing that less can actually be more. It is the thing I was babbling about earlier, that inspires you to go out and shoot and improve. It is demanding. It is perfectionistic, just as much as I tend to act. If my medium format camera was a knife, it would be a simply pragmatic and shiny butter knife, efficient and good at what it does, whereas my 4x5 would be the Swiss-army-knife, exaggeratedly speaking. When you are constantly evolving and changing as a craftsman, your tools should be able to keep pace with you and support your creative workflow.

Although a camera shouldn’t be where you seek inspiration in first place it very well can be. It is definitely not a place which holds the answers to your questions, nether will it make your work itself any better, BUT it might just raise more interesting questions that weren’t on your mind before. 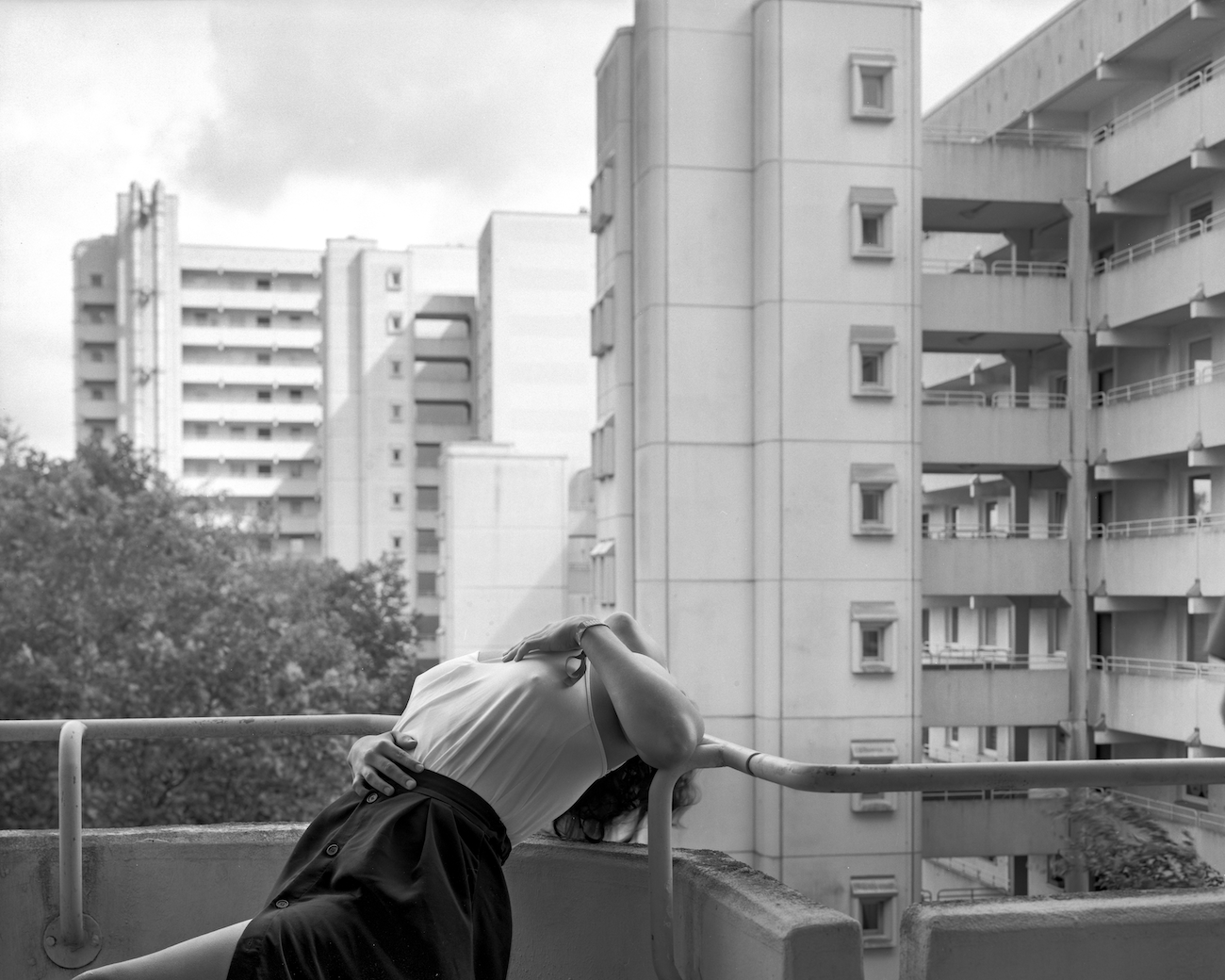 Yasmin/ A Prospect For The Sullen Series

It is only now that I begin to gasp what it means to work with a large format camera. For me essentially a big part is about: „You only make work that is important in some way and for someone.“ You’re being even harder on yourself I discover. It minimizes the therapeutic aspect of just going out to shoot, the aspect of escapism, when you actually don’t want to limit your creative output. So rather than shooting anything hasty, half thought-through, your energy will ideally go into planning and conceptualizing, writing and everything apart from the actual and final image taking. Because I wouldn’t want ten versions of the same shot, it’s expensive first of all and more so besides the point. So it may even help you improve your storytelling abilities.

For someone like me, who hasn’t exactly blessed with huge amounts of money, the Intrepid is a cool place to look for a large format system. A system who's craftsmanship I trust way more than all those plastic-made options. Sturdy and compact. Making a whole genre of artisan craftwork affordable for anybody who dares trying.

I still own the first kickstarter prototype, and it is cool to observe that Intrepid is actually listening to the user and are going from there, having improved precisely what I would improve on my 4x5, an all-metal, more precise front and more ergonomic bottom with tighter focus-plate.

I feel very at home with my large format camera. Practice got me into an efficient working process. It’s a slow process but if one brings a little patience with him, and I keep preaching the same to myself, I feel able to paint an authentic picture with one or two shots only, which I am quite proud of. Next stop: 8x10. 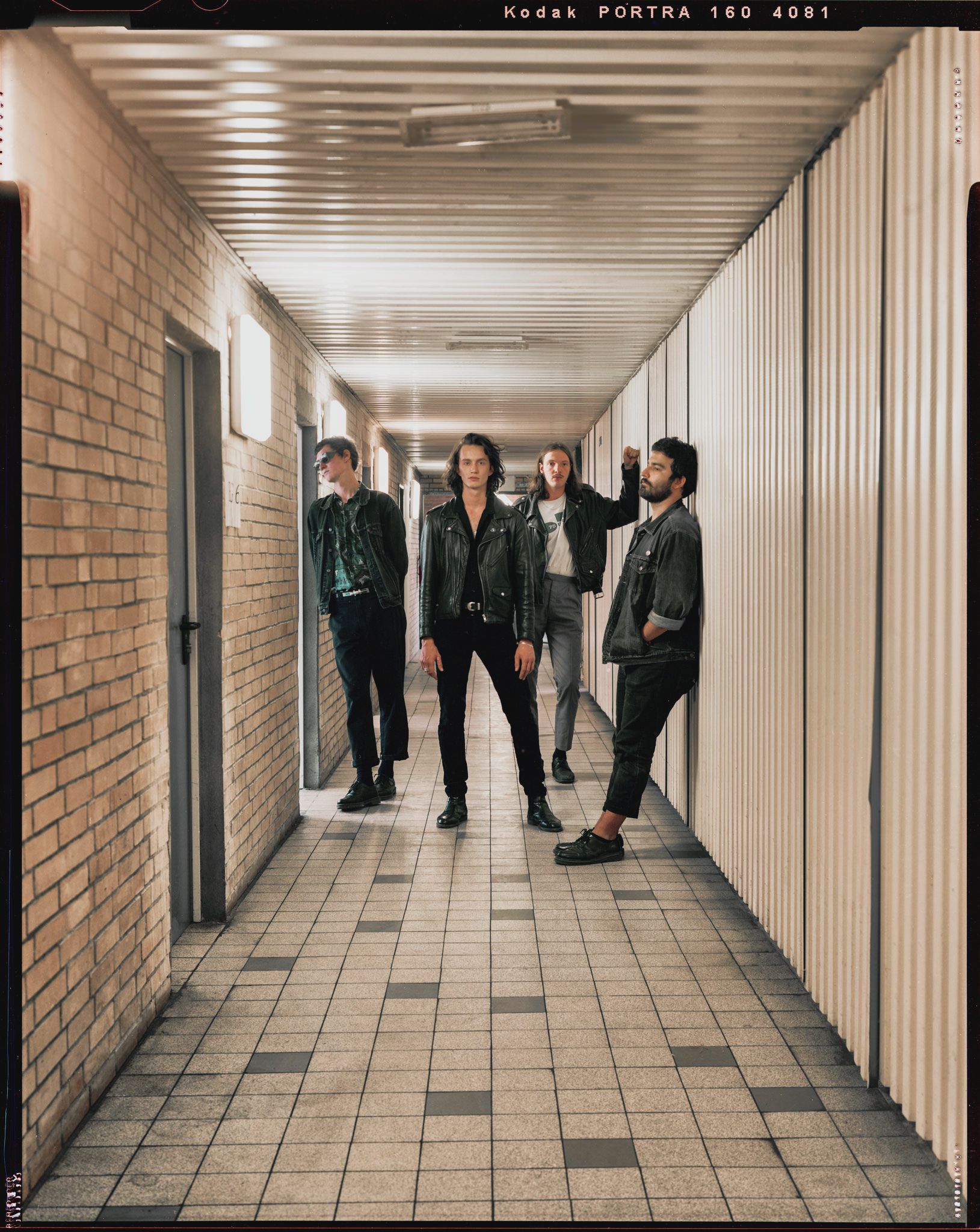