I grew up skateboarding and was immediately drawn to photography through skate mags and zines, I was very much inspired by the work of Dom Marley, Leo Sharp & Oliver Barton who were all shooting on film. Cue an injury at 15 years old which took me off the board for best part of 18 months, being surrounded by very talented skateboarders that were (and still are) close friends, I took this as an opportunity to start learning photography. Initially I started with a tatty old Nikon DSLR but I always felt unfulfilled by the images I was taking, and felt that the work I made didn’t tie in with the work of those that inspired me at the time. I then invested in a 35mm SLR which lead to a transition into medium format, and I soon found myself solely shooting film. I’d been shooting for around 7 years self taught until I decided to immerse myself in photography by studying it at university, this is where I was introduced to 5x4. I had read about large format, but the technician at Solent University suggested I have a go as he felt it would compliment my portrait work. Solent had a load of Toyo’s at the time, so I took one out and very quickly fell in love with the process, from then I was hooked on large format! 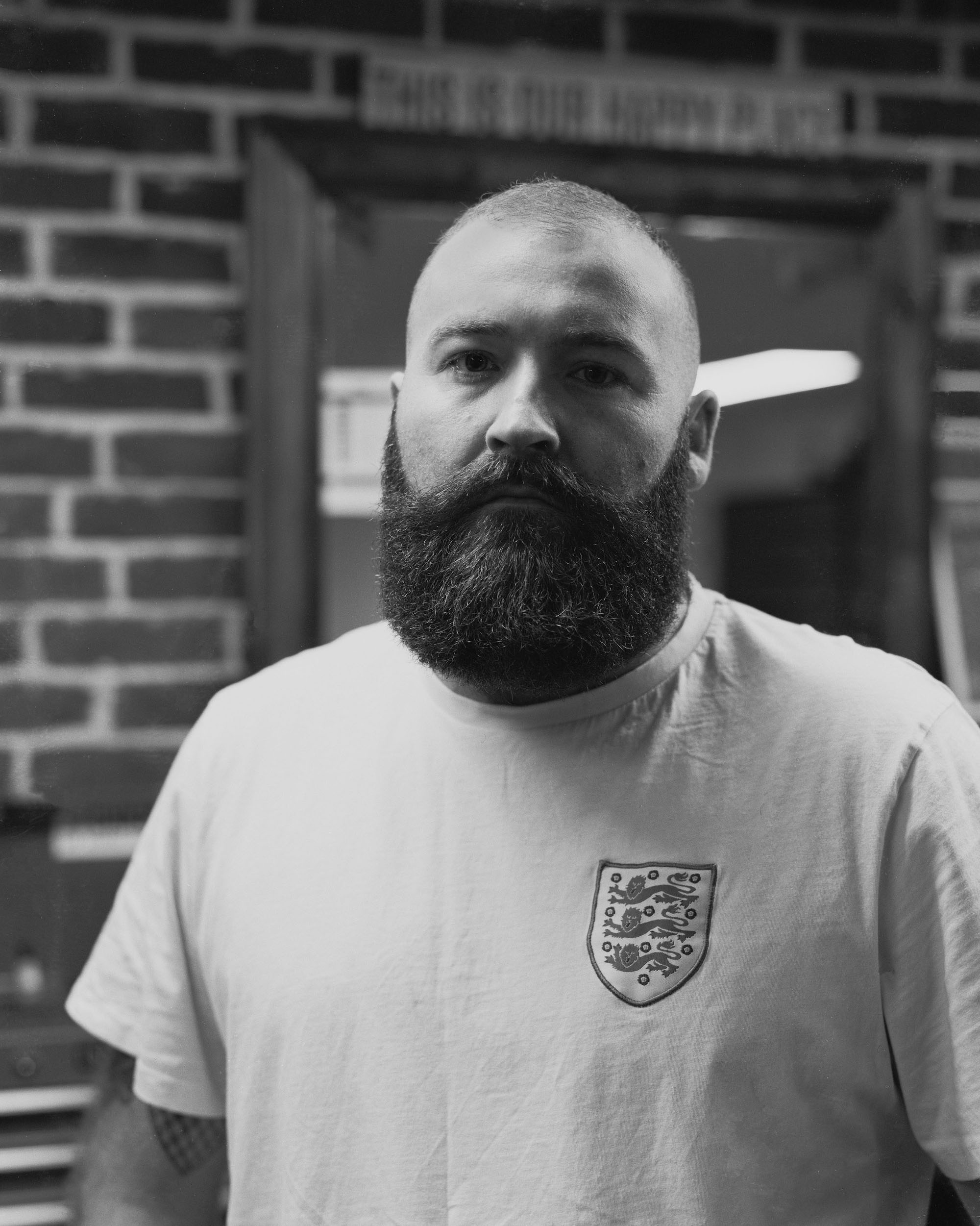 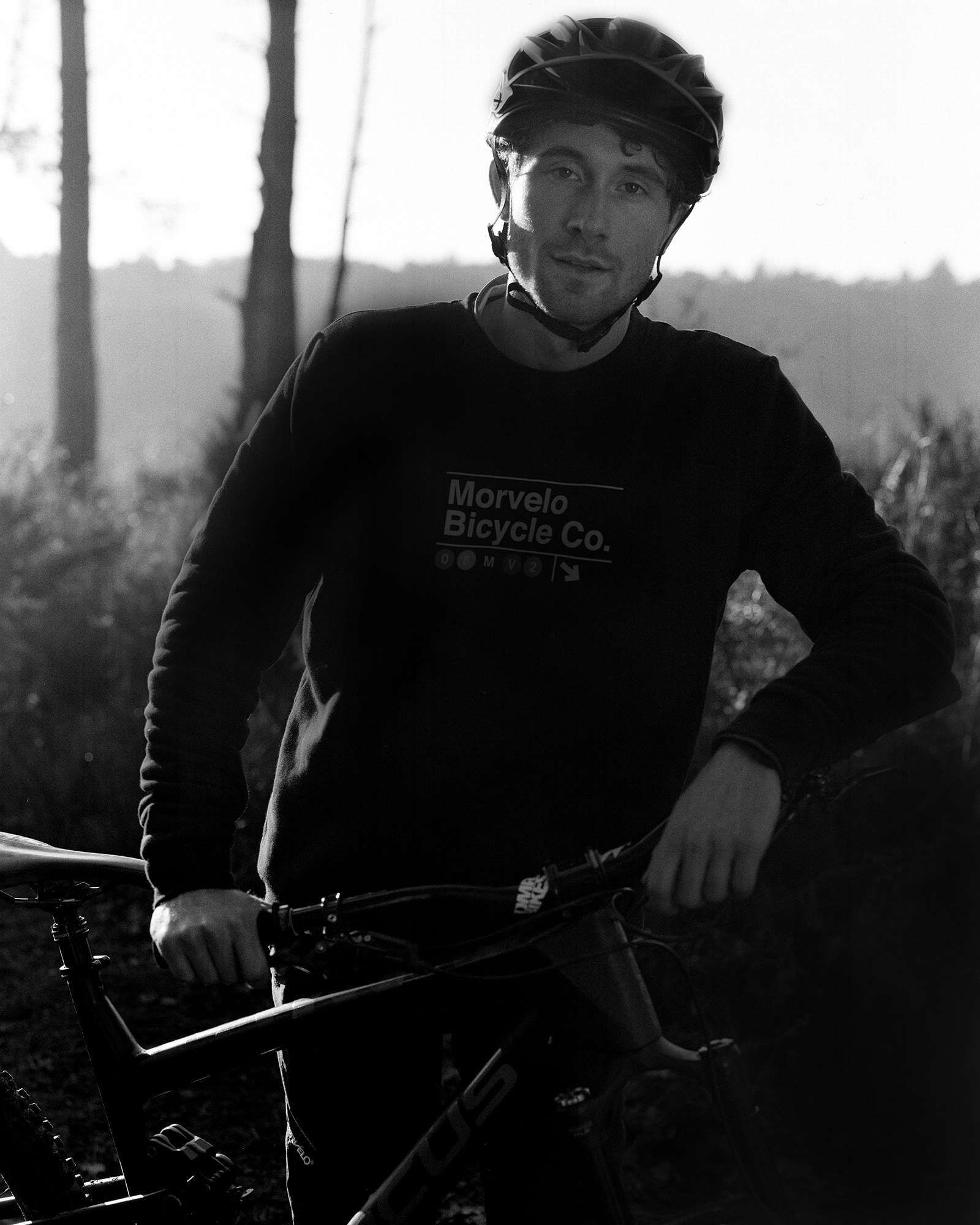 You do a lot of sports photography on digital, how does shooting 4x5 compare to you? Do you find it slows you down a lot?

Yes, my work is predominantly digital these days. I fell into my career path by chance after some of the work I produced at university was spotted by commercial clients. I was really fortunate but I ended up having to sell all my analogue kit (bar my Olympus MJUii) to fund a digital kit. Speed was key, when shooting sport the turnaround of images is pretty quick so it just wouldn’t be possible to shoot film and meet client expectations at the same time. I soon felt like something was missing, I love the process of photography. The process of creating an image and making prints thereafter, especially working in the darkroom. As my commercial work developed I found myself with more time and getting back to shooting more portrait orientated work, so the large format itch soon returned. I bought an Intrepid 4x5 MK3 which I love, it’s a huge contrast to my commercial work as the process forces you to slow right down. I also really enjoy that I’m limited to the amount of slides I bring with me, I deliberately don’t bring extra film. I shoot it with the mindset that I want every photo to count, in contrast with digital cameras you find yourself shooting until you get the shot. It’s a different process which is much slower but I’ve found it complimenting my commercial work by slowing me down. Now I’m shooting much less but walking away with far more images as a result. That said I view cameras as tools, and 4x5 is a different tool which I use to get a different type of image. 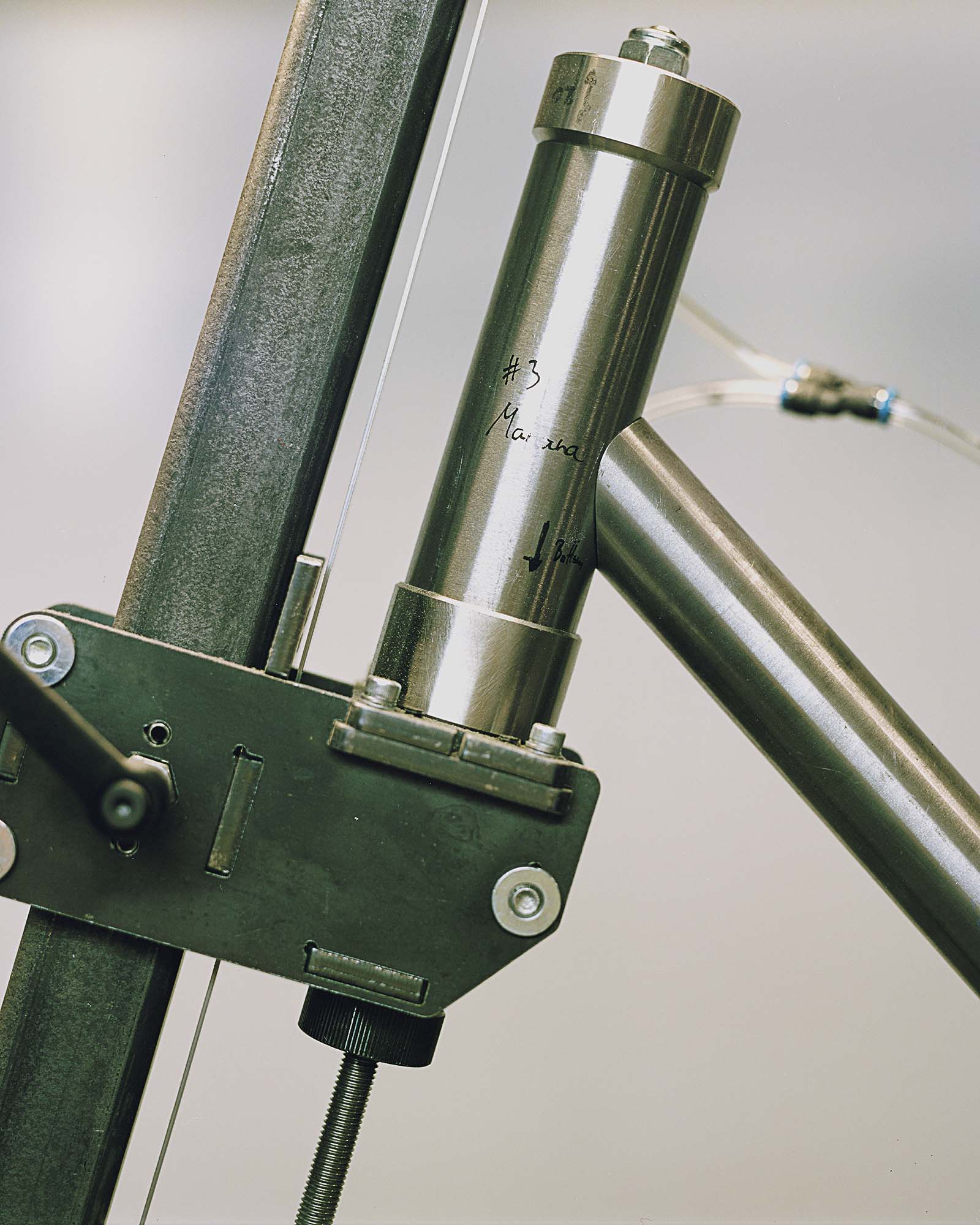 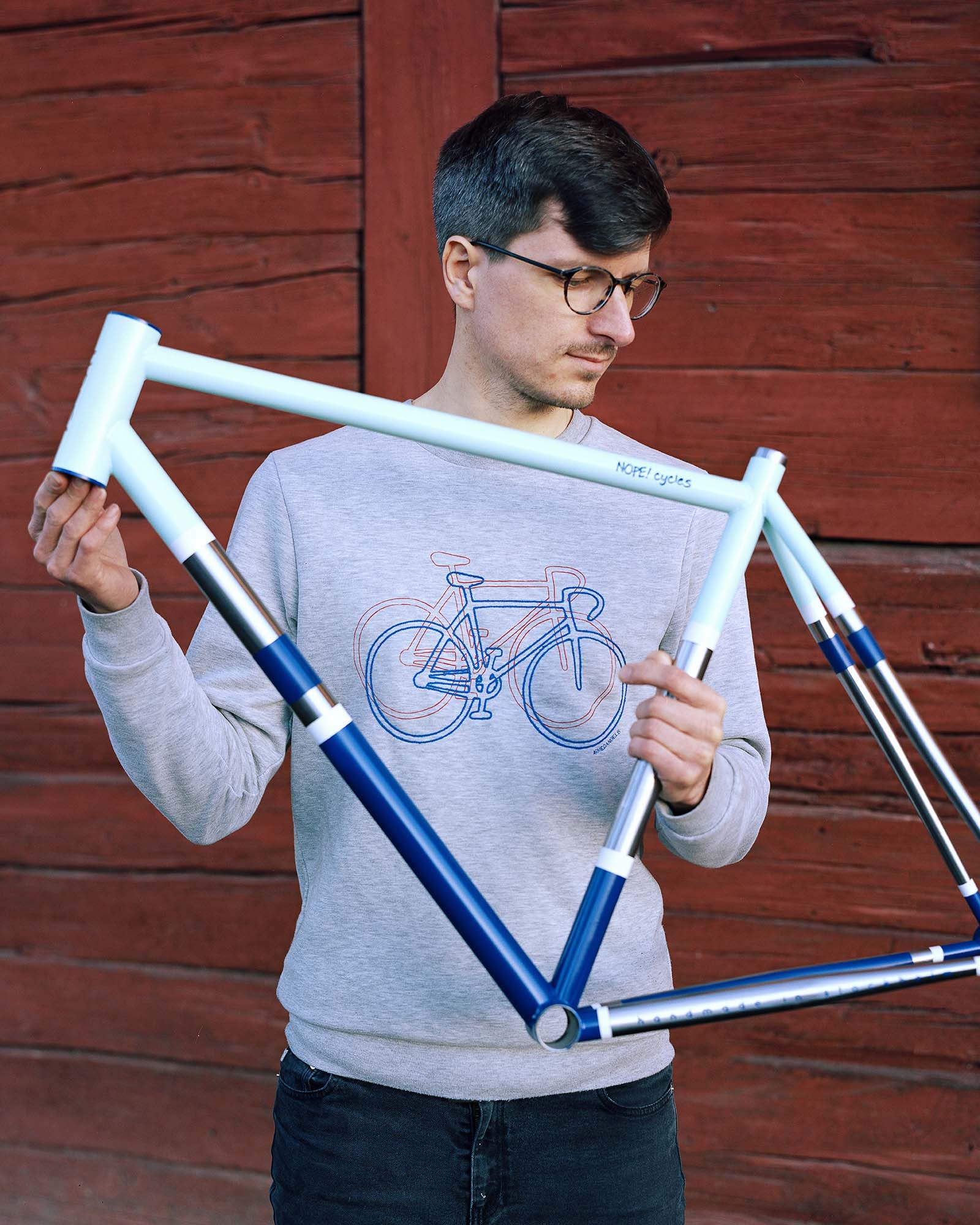 Your recent collaboration with Nope!Cycles has a real timeless documentary feel, was it challenging shooting something like this on large format?

That was a fun project. Moritz and I had been talking and he was very understanding, shooting solely LF felt like a bit of a gamble but I wanted to push myself and put myself in a situation where I felt I could shoot on the Intrepid for a commission. It was refreshing as I felt like I went back to my roots in photography, a few sheets of film, light meter, and a couple of flash heads. I will admit I did take a test shot on the digital camera but this was just to check the lighting of the welding shot. It was a challenge but it was really rewarding to get the negatives and scans back and see that it all worked out, I’m glad you think they have a timeless documentary feel as that was my overall aim with the project. 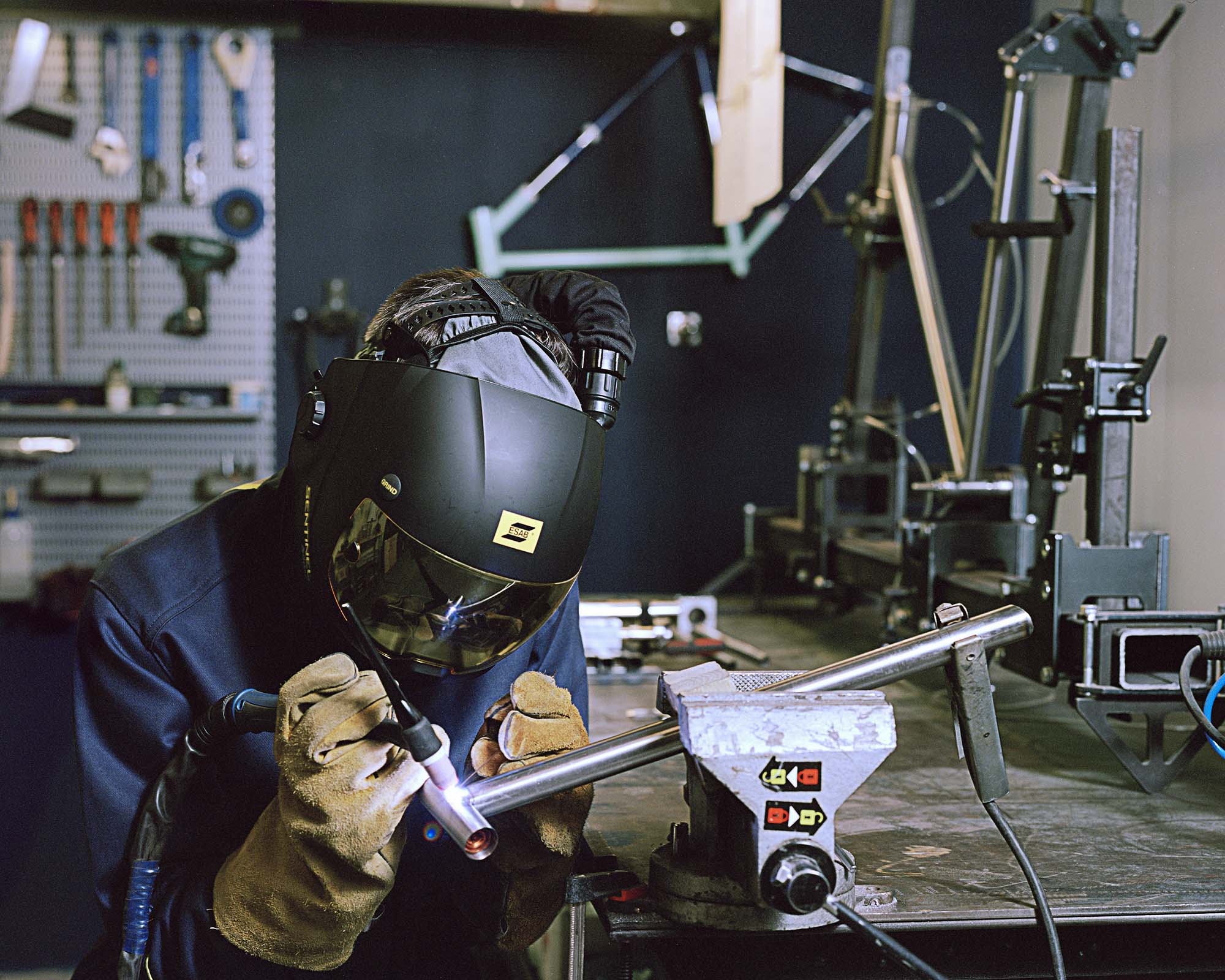 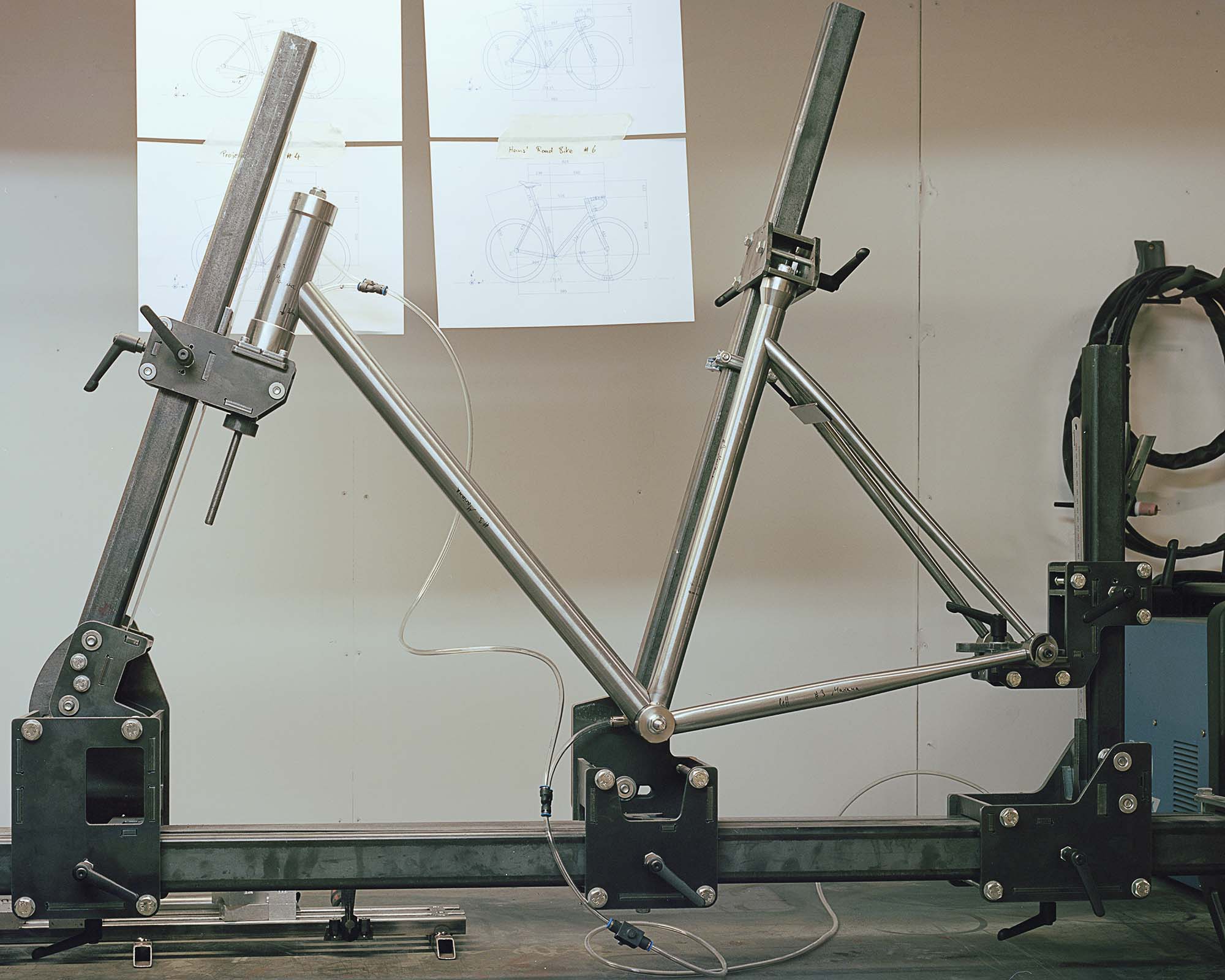 Which is your favourite portrait you’ve taken on 4x5 and why?

I think my portrait of Jim, he’s a good friend and a keen amateur photographer. We used to work together before I became a full time photographer, he’s always been up for my experiments so we have shot a few times together in the past. We hadn’t seen each other in a while and I’d just got my Intrepid, as a keen bike-packer I thought it would be cool to portray that in LF as I felt bike-packing and 4x5 photography complimented each other. As always Jim was really keen so we loaded up our bikes, went for a ride up onto the South Downs and took some shots, all the shots from that day really stand out in my mind even though it was nearly a year ago now. 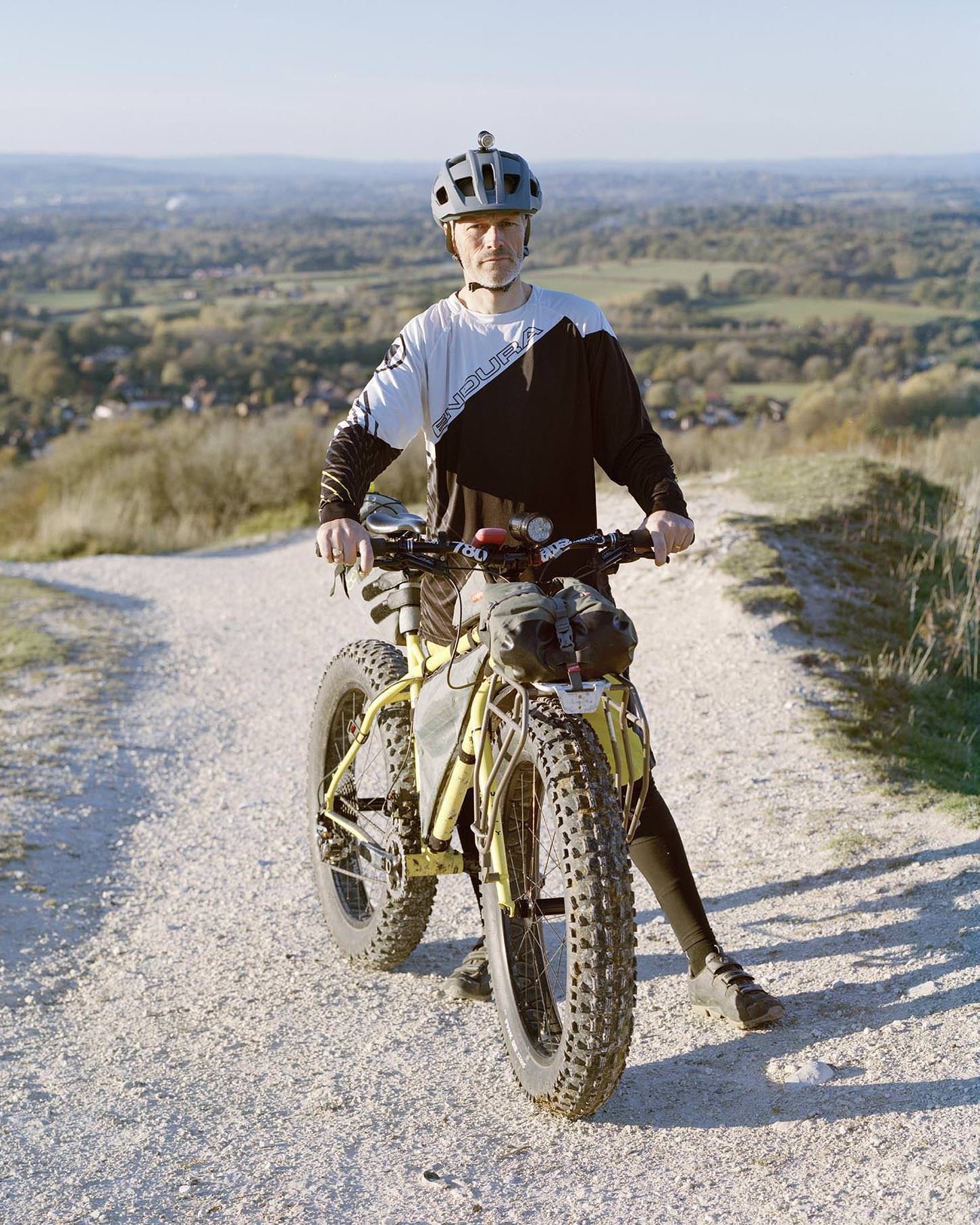 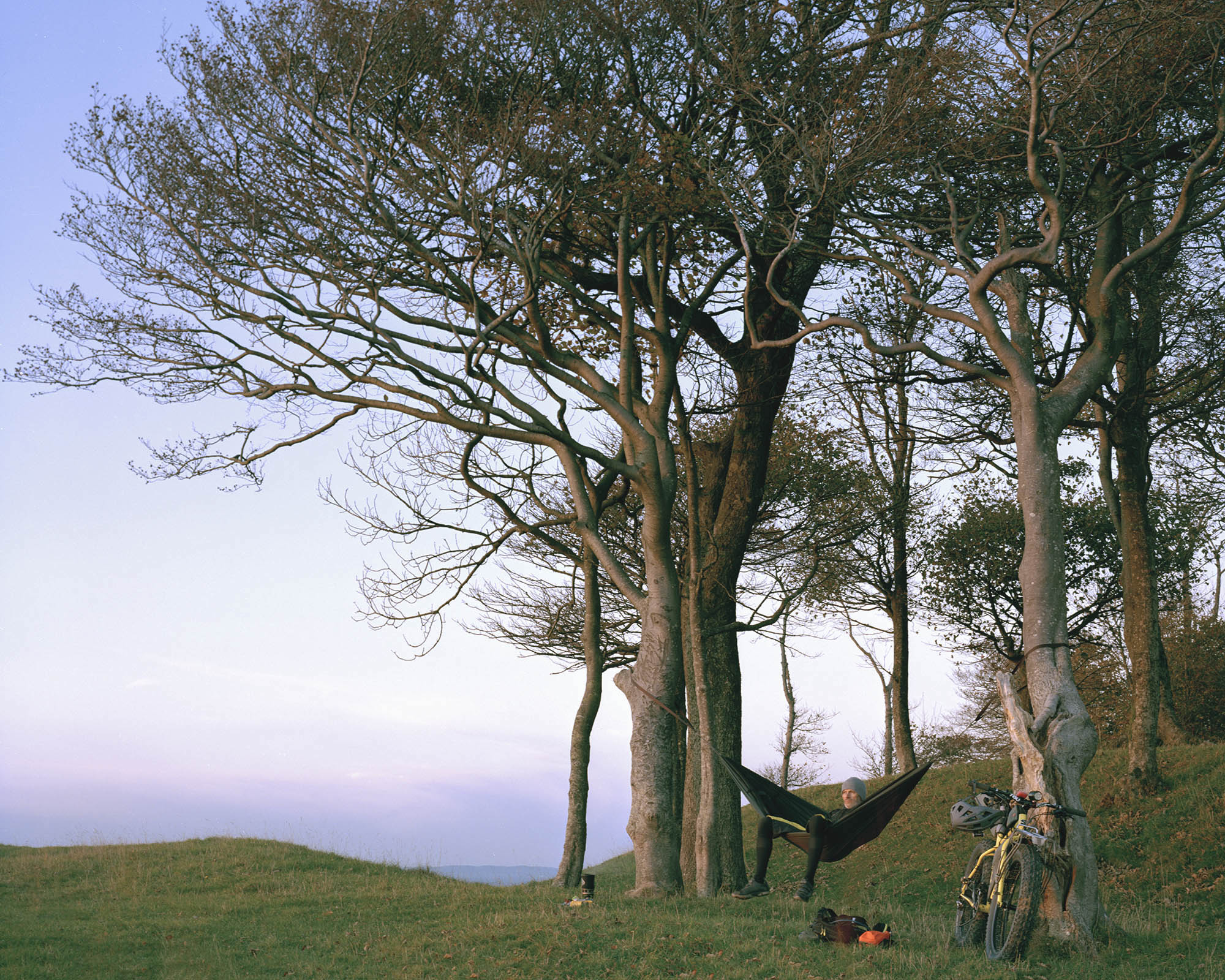 You’ve recently started working in Gothenburg, Sweden. Has the change of scenery from the UK affected what you’re inspired to shoot?

Yes it’s been great to have the contrast working between the UK and Sweden. The Swedish landscape is very wild and untouched, there are also plenty of new subcultures that I’m slowly discovering. I don’t think the move has changed what inspires me but it has definitely given me a lot to consider, outdoors lifestyle and sport is huge in Sweden. In terms of subject matter there is so much to choose from, I’m still finding my feet but hoping to create some work exclusive to Sweden in the near future. 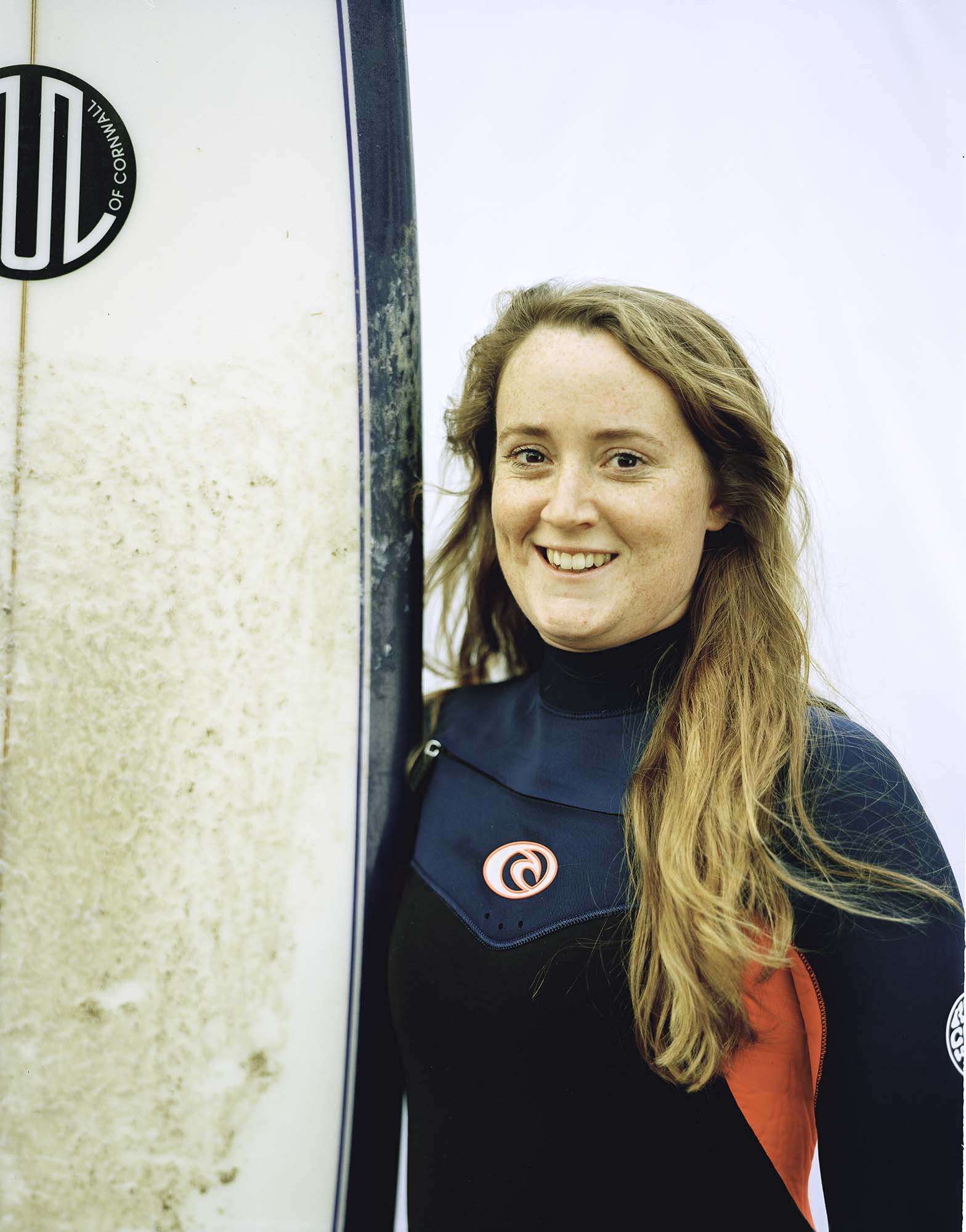 Do you have any future project ideas we can expect to see soon?

I’ve been documenting the surfers at West Wittering in the UK for a while, I tested an idea there late last year with the Intrepid. I’m heading to Varberg soon which is a bit of a cold water surf Mecca and a notorious surf spot in Sweden. I’m hoping to create something whilst I’m there for a few days centred around the Surf community. Motocross is also really big in Sweden, I’m a big motorbike fan and so another project I’m looking into is the Motox/enduro scene in Sweden. Watch this space… 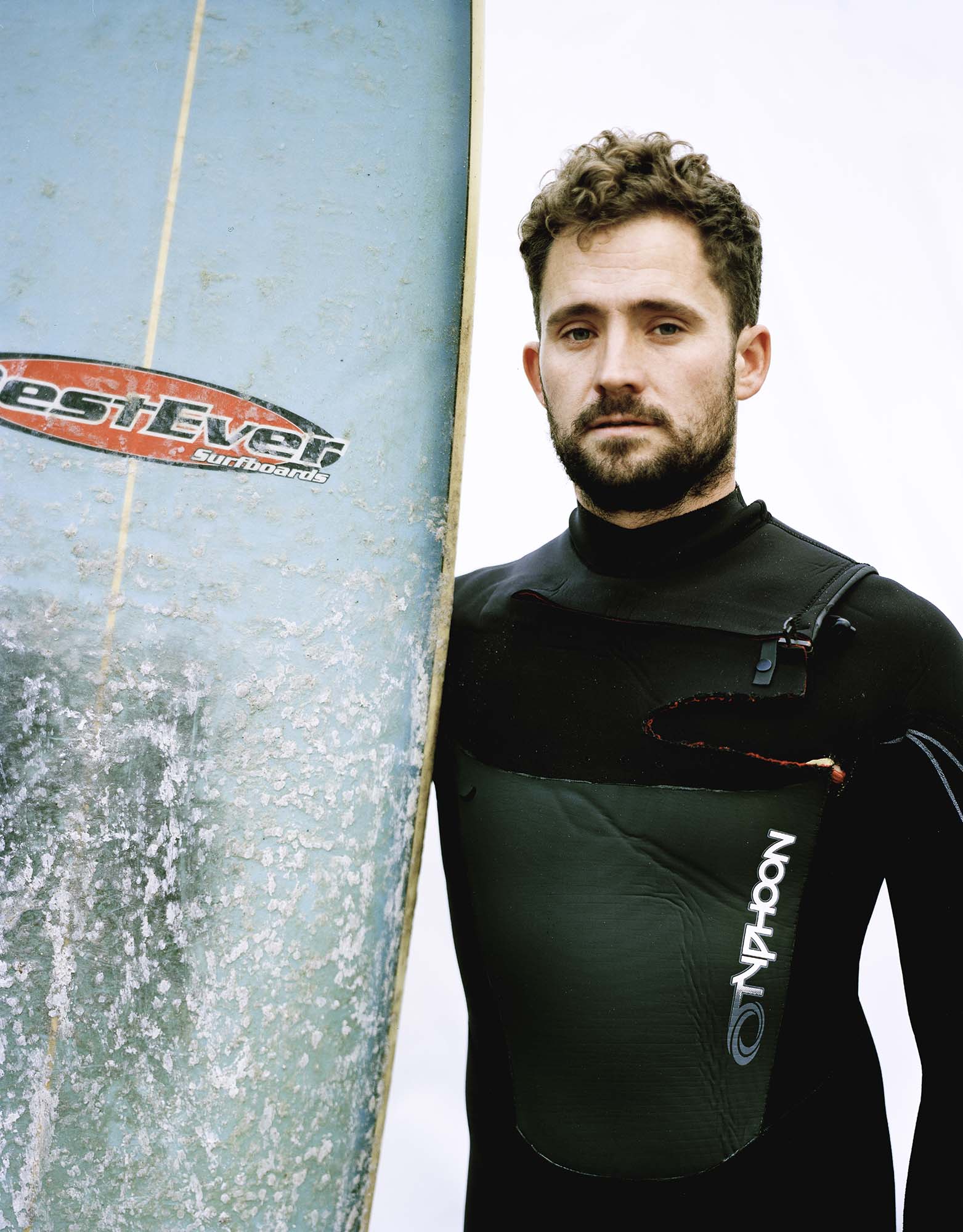 Do you think it’s better shooting film now that we have the option of digital too, and all the tools like Lightroom and Photoshop?

It helps for sure, it definitely makes it more accessible to people. It’s really easy to shoot some film and get it processed/scanned at a lab and then add you own touch later on. I tend to use FlexColour for initial adjustments to scans and then Photoshop; Lightroom isn’t great for processing analogue photography in my opinion. It’s great for batch processing digital photography but for processing scans I think Photoshop is best as you can be a bit more delicate, and in my view it’s easier to manage files this way especially 4x5. The scans I receive are usually 300mb plus files, and so working them individually in Photoshop is best for my workflow, Lightroom would probably be fine for those shooting 35mm though. 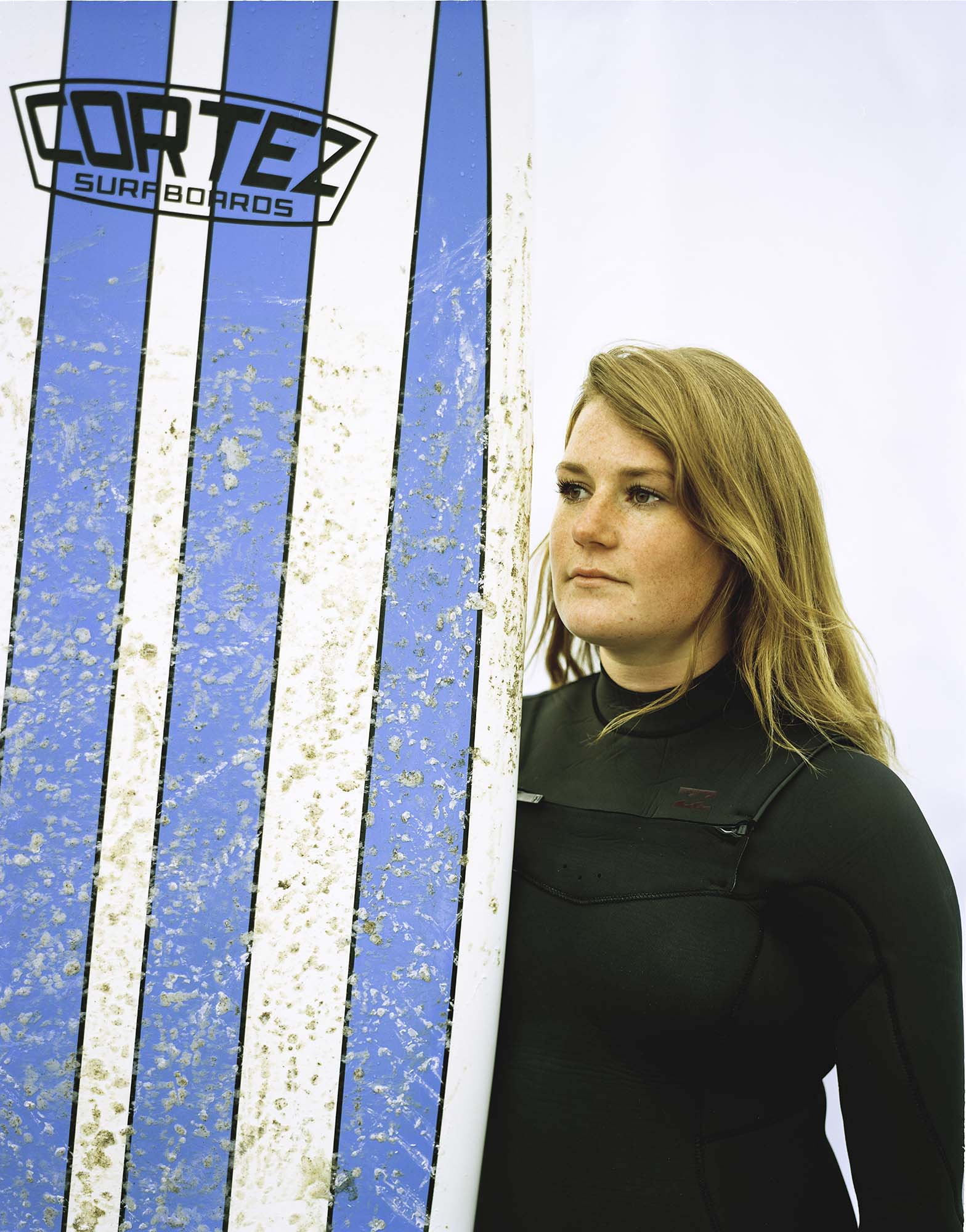 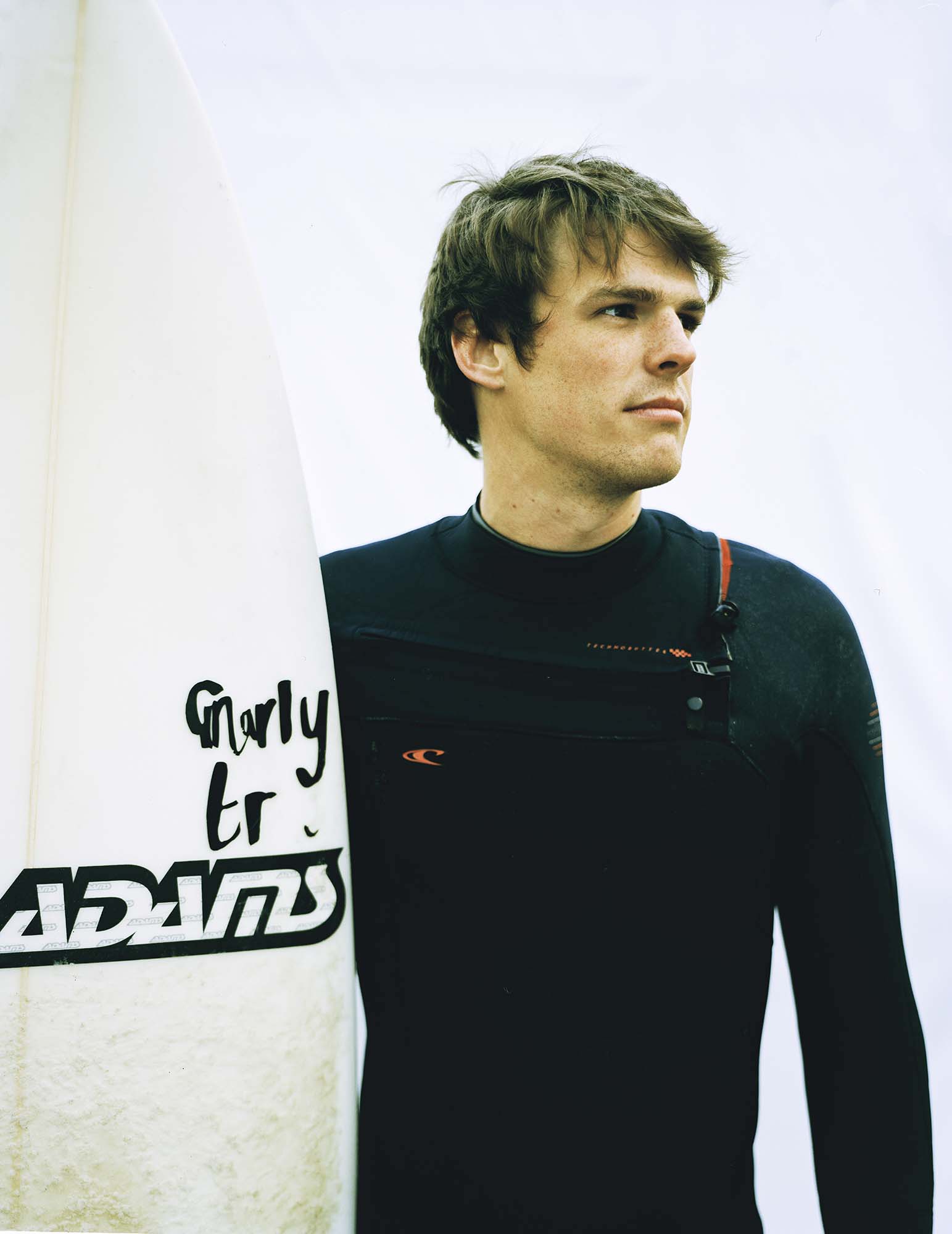