Barbara Davidson has spent much of her professional career as a photojournalist photographing war stricken countries and those affected by devastating events and crisis’ worldwide. Working for ten years as a staff photographer at the Los Angeles Times she honed her ability to not only document, but to portray specifically the powerful stories of individuals. Often focusing on the experiences of women and children in these situations, she aims always to show her subjects in a dignified human context, amidst often shocking unjust circumstances.

Almost ten years ago Barbara began a project closer to home, aiming to shed a light on the consequences of gang related violence in LA, with a focus specifically on victims of gang affiliated gun crime. The work was incredibly well received and is a testament to photojournalism at its finest. Crucially too, it opened her eyes to a crisis not only in her home city but throughout the nation.

Barbara now sets out on an ambitious next chapter to document those who are survivors of all types of gun violence, from all walks of life and backgrounds. Planning to tell their stories through life size portraits shot on 8x10 film, she believes putting a human face to the statistics will create a powerful message. She is currently travelling around the USA, creating this body of work. Watch the video preview below for a behind the scenes look and some more insights on the series. 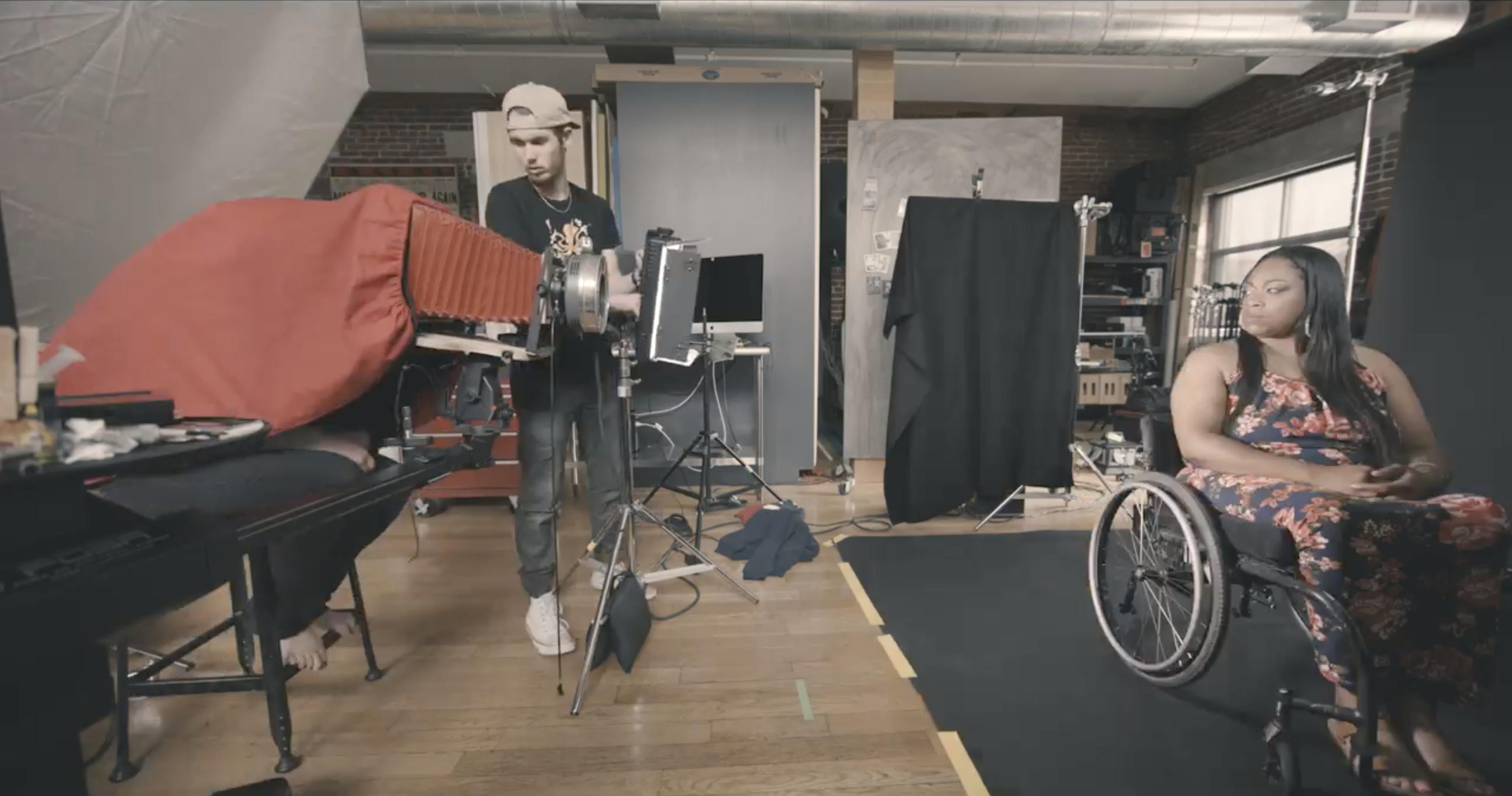 Barbara in the studio photographing Rose Smith, who was shot and left paralyzed from the waist down while pregnant with her daughter

Is there one moment or story in particular which inspired you to expand your project into documenting survivors of gun violence nationwide or was it a multitude of instances?

I worked for years telling the stories of innocent vtictims of gang violence in LA for the Los Angeles Times where I worked for a decade. I was so disturbed by the gang violence that was happening all the time - people being shot by stray bullets or being targeted – and it was hardly a blip on the news. So, I immersed myself in telling the stories of the people it was happening to. That work, ‘Caught in the Crossfire’, was awarded the 2011 Pulitzer Prize for Feature Photography and our film won the Emmy for ‘New Approaches to News and Documentary.’ I view that work as my first chapter of exploring the consequences of violence and the project I’m currently working on as a natural continuation of that theme. I wanted to expand the coverage, in part, to include all kinds of gun violence – self-inflicted gunshot wounds, domestic violence, robberies, hate crimes, school shootings, so that is what I am focusing on now.

Did you find people willing to tell their stories with ease or is it a long process to address the topic and decide how best to photograph them?

It took me about six months to really feel comfortable with the technical demands of making studio-lit portraits using an 8x10 camera. And once I felt confident in that steep learning curve, I immersed myself in the academic side of this project to gain a thorough understanding of the complexities of the gun debate in the United States. Once I better understood the debate and statistics, I started looking for individuals who would represent a well-rounded picture of who gunshot survivors are in this country. My project has been well received by survivors and I am finding they want to tell their stories and they want to be a part of an initiative that creates awareness about the health epidemic impacting our country.

Rabbi Yisroel Goldstein of Chabad of Poway who was shot in the hands April 27, 2019 in California.

“I was preparing to give my sermon Shabbat morning, Saturday, which was also the last day of Passover the festival of our freedom, when I heard a loud bang in the lobby of my synagogue. I went to the lobby to check. What I saw in those seconds will haunt me for the rest of my days. I saw Lori bleeding on the ground. And I saw the terrorist who murdered her. This terrorist was a teenager. He was standing there with a big rifle in his hands. And he was now aiming it at me. For one reason: I am a Jew.” - Rabbi Yisroel Goldstein

There can be a lot of focus on statistics, law, and politics when it comes to this subject, rather than individuals. Why did you intend to pursue a different more personalised route?

I think a missing link in the broader conversation about gun violence is that we don’t speak enough about the survivors and those who have been killed. My aim is to put a human face on the statistics and hopefully my photographs will introduce to audiences – some of whom have never met a gunshot survivor – an understanding that this it can happen to any of us.

The video snippet itself is certainly very moving and the emotion comes through strongly. What do you hope people will take from the project?

I would like there to be an awakening of sorts that gun violence can happen to any of us and turning a blind eye is no longer the way to deal with the crisis. Sometimes people connect more emotively to art than they do to talking heads on cable news networks. I hope people will see themselves in my images and be inspired to act.

A nationwide portrait project is a pretty big undertaking, why nationwide rather than just LA or specific areas?

This is hardest creative and logistical undertaking I have ever pursued and the most expensive. If it wasn’t for my Guggenheim Fellowship award, I wouldn’t be able to take on such a massive project. Having said that, I think the money will run out before I can cover the entire country, but I will try to make 50 portraits in total. I’m driving across Texas right now with my two dogs and my catalytic converter broke. LOL – I don’t wish that expense on anyone.  So, you are right, I could have told this story in California alone but I don’t feel that would be the full story of the who – and the why – of the victims being shot. Each state has very different gun laws and so I wanted to tell a more accurate story of who this is happening to across the nation. It feels more authentic to me doing it this way, and it’s kind of the ultimate road trip. 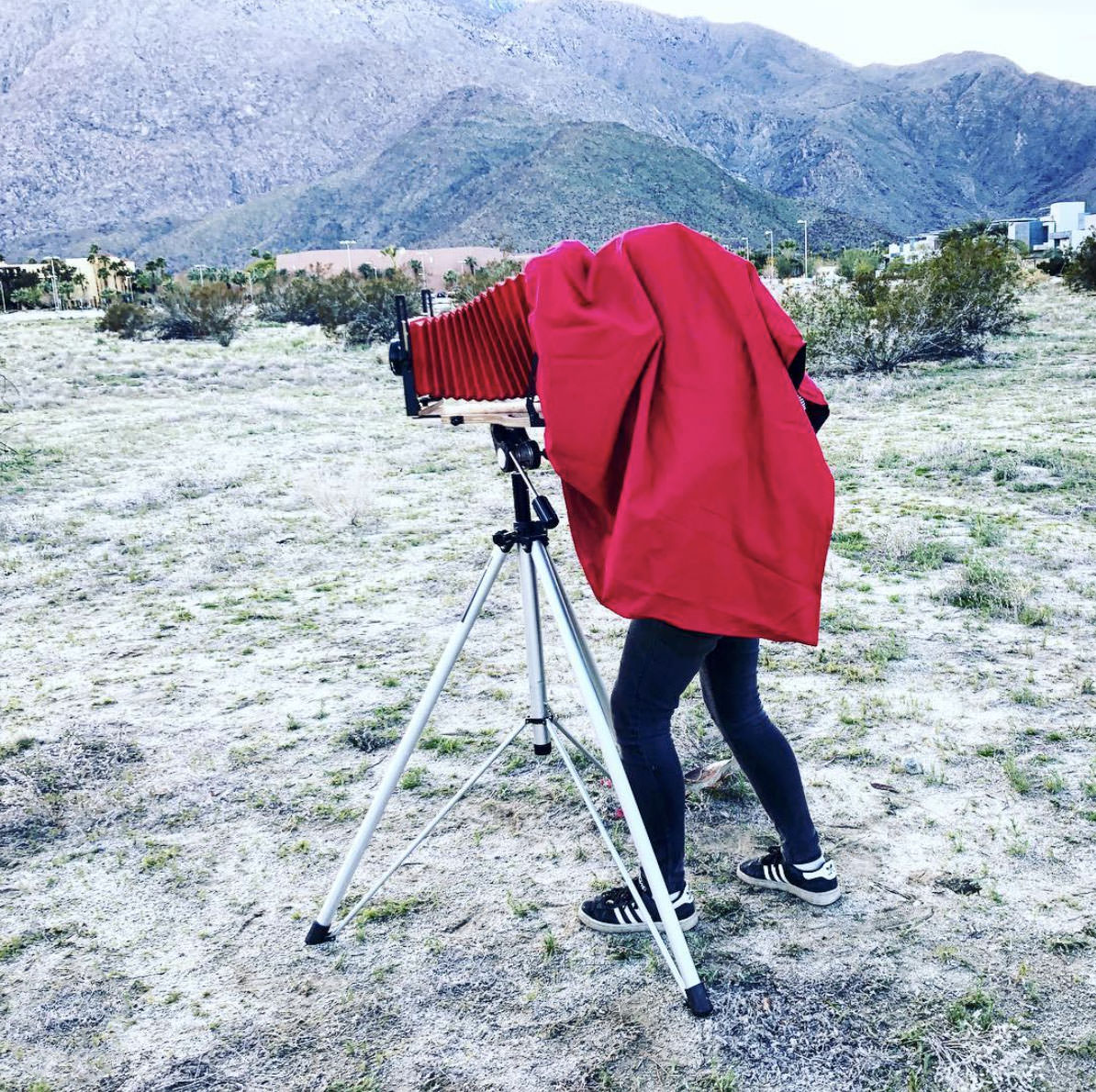 How are you going about planning and putting everything into action? Can people still reach out to you or have you found all your subjects already?

I’m working with two great researchers, Nicole Klein and Max Wallace, and while I drive they try and connect with survivors whose stories they think I would like to tell. I also get tips from friends of friends when I arrive to a location which is so helpful. I view this as a collective team effort. There is no way that I could create this body of work alone, but lots of people are helping me bring this all together. It’s definitely hard work but things are starting to gel. However I have certainly not found everyone I am hoping to photograph so  I’m very open to ideas and suggestions of who might be open to the project.

Why did you decide to shoot the portraits on 8x10 film, rather than digital or a smaller, quicker to process format?

I left my staff position at the Los Angeles Times in April of 2017, in part because I wanted to shake up my creative process and make photographs that I could ‘create’, instead of ‘capture’ as I had done as a full-time photojournalist for some 20 years. I was eager to make images outside of my comfort zone which is why I’m working with an 8x10 film camera now. It really slows down my process and inspires me to be more contemplative about my composition. I could have produced this work digitally but then I would not be growing creatively as much as I am now from using a large format camera to create analog portraits. The goal of this body of work is to share detailed, life-sized prints of survivors of gun violence - both indoor and in public spaces - for audiences in the United States and beyond. The quality and aesthetic that an 8x10 negative brings to this work is unmatched and I want this project to have a special visual quality.