It must be somewhere here’ is a year-long survey of the Northern deep coal-mining landscape. As the granddaughter of two miners, it acts as both a geographical study and inquiry into ancestry. A departure to colour depicts former colliery sites which have been visually affected by the chemical aftermath of deep coal-mining. Unnaturally high levels of manganese in still-draining mine-water stains rocks orange, and the erosion of cliff formations reveals materials from a colliery landfill. I record various places of memorial and colliery remains. Through ‘slow’ large format photography, and the photopolymer gravure, I create works in which time cannot be specified, where the process is elongated as much as possible, commenting on manual labour, materiality and the ritual of returning home to walk in the empty industrial lands where man once laid his hand. - Amber Brown

Everywhere that was lived experience

has moved away into 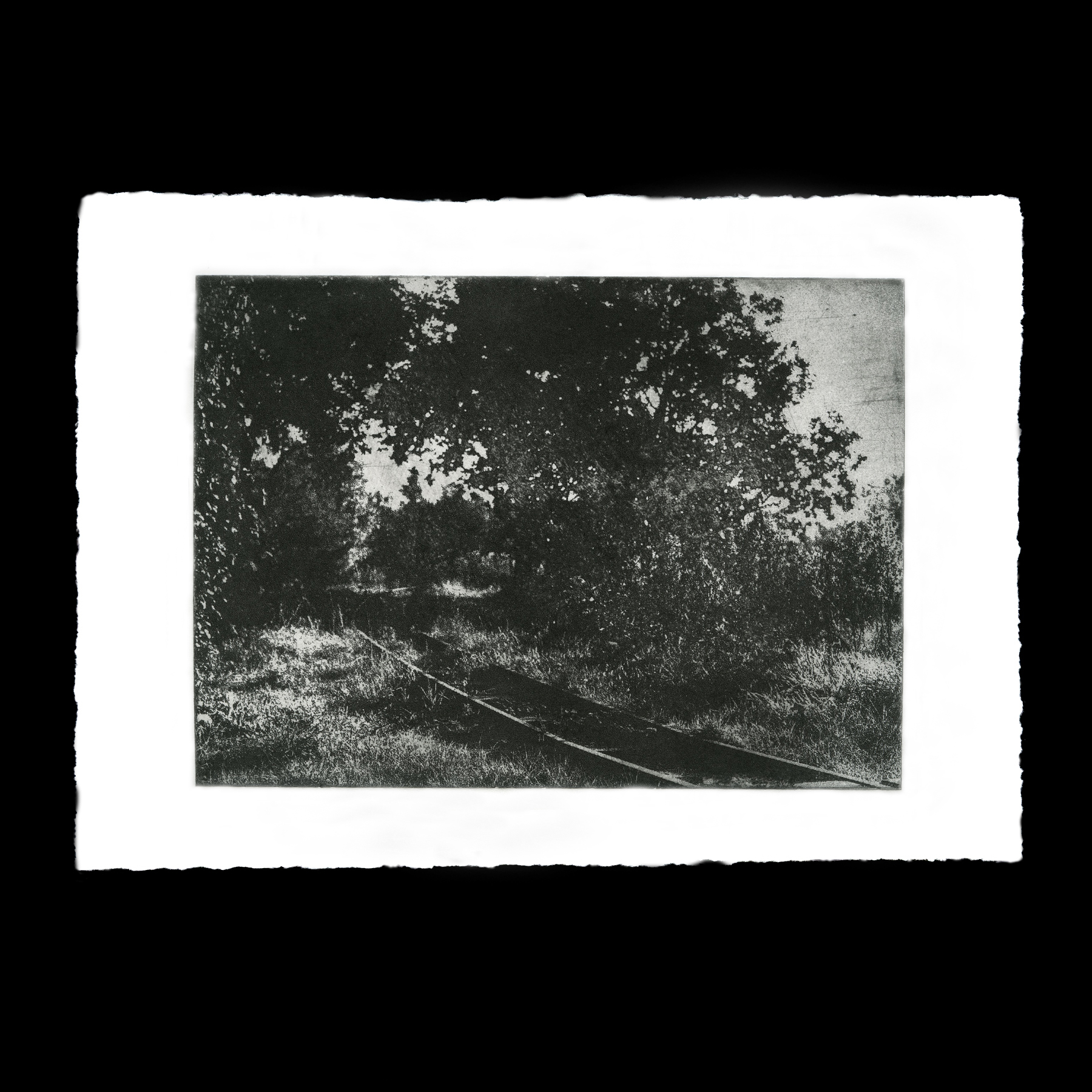 This series is fascinating as even without prior knowledge you can see there is a personal connection to this landscape. Was it important to convey this in the images?

Our personal connections to land, along with notions of heritage and local history have always been recurring themes in my work. Coming from the North East of England, I’m very interested in the post-industrial landscape and the traces left over from industrial impact which has been documented by many photographers, including Bernd and Hilla Becher, John Kippin and also Peter Iain Campbell’s recent work, Ask the Sea.

I’m a very proud working-class artist and have always been interested in both exploring this history and challenging elitism in the art world. When I got into art school, I realised how much of a divide there was, and how much was just taken for granted. Being fairly homesick, I returned home most weekends and began making more personal work. In a past project supported by Grow Wild and the Royal Botanic Gardens in Kew, Earthworks, I focused on Northumbrian allotments and in The Coming Soon Land – my first 4x5 project – I was looking at the housing developments in my home-town. My current project It Must Be Somewhere Here is a survey of the Northern deep coal-mining landscape. All of these heavily relied on research; it’s something that is constantly forming in my practice through archival research, walking research and also conversations with passers-by. These often start with a curiosity in my bright red Intrepid kit (I’m sure most large format photographers know this very well!). How did you go about scouting the locations for this series? Did you have prior knowledge or did you discover them as the project evolved?

Most of the locations I knew already from conversations with family, but many of them were found specifically through my archival research from films, maps, and internet forums (which were an amazing help). I was in some local history groups, and started to scour for anything relating to local collieries or areas of remains. I started by looking at places where I knew there was something, and then gradually as I worked my way through old maps, started to find more places where there was no solid evidence referenced, going with an aim to find something myself. Whilst I do have prior knowledge of the subject, a large amount of research comes from conversations, hearing memories and experiences relating to the Northern mining landscape. I’m not an expert and as the working element of the industry no longer exists here, it’s become a very observational project where I’m learning along the way.

Both of my Grandads were miners in my local area; one who worked at Woodhorn Colliery, where photographer Mik Critchlow documented his work Coal Town. The colliery is now a museum, which houses the local archives. From being very young, I remember visiting the museum often. However, after moving away for some time, my attention upon visits was turned to the traces that people had left on the land. The surrounding railway, cast coal carts, how parts of the area had been turned into a nature reserve. Most of the time, our conversations would go straight to asking about what certain relatives may have done here, did we have any photographs or documents relating to their time here? That was the bare bones of where my current project It Must Be Somewhere Here started; at the heart of it is an exploration into our own personal connections through land and the impact that our ancestors made, and what human traces exist now. 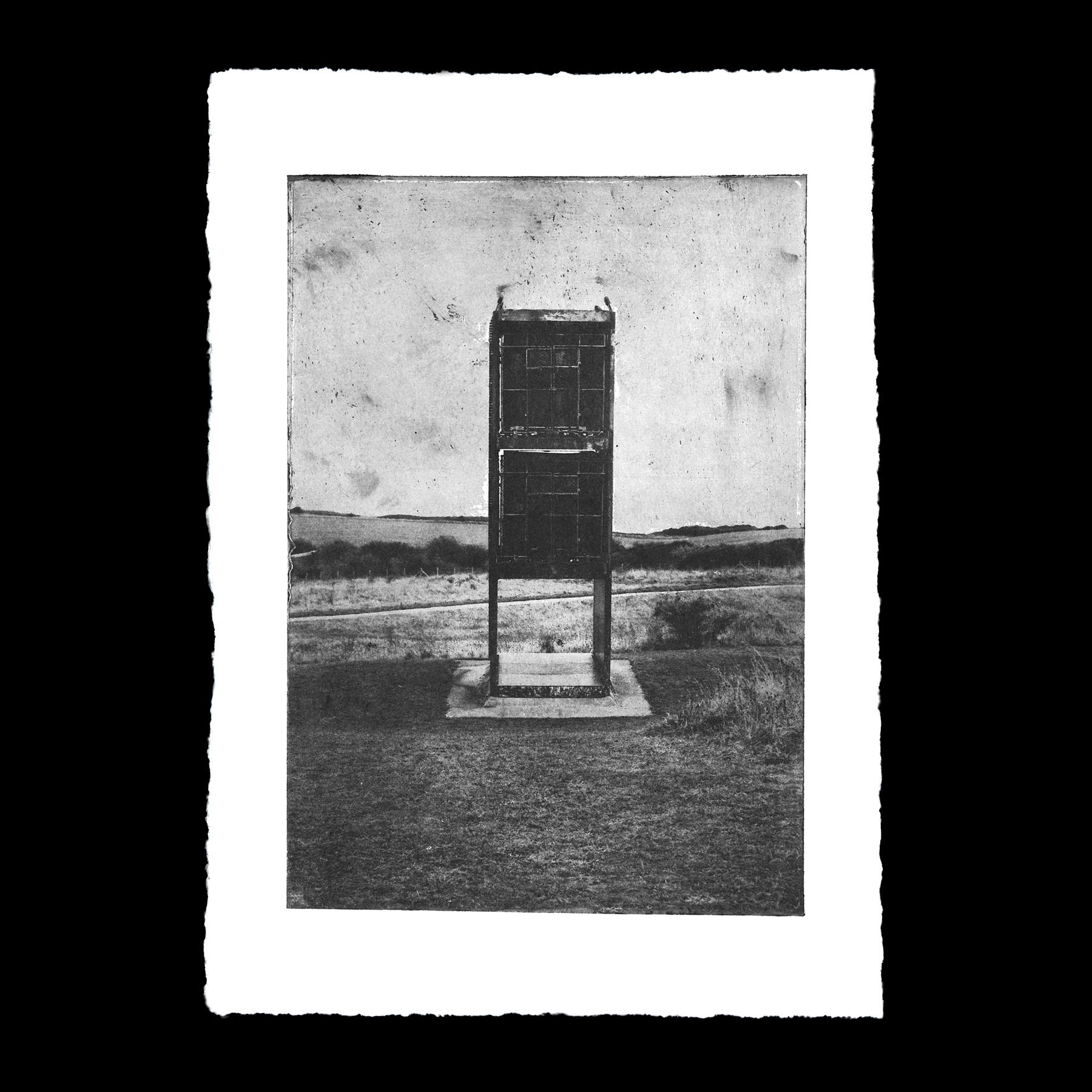 What printmaking techniques do you primarily use and what do you like about them?

As well as my photographic practice, I also experimented with printmaking for quite a long time. I didn’t start to intertwine the two until Earthworks, when I had begun practicing a technique called Photopolymer Gravure. Photopolymer Gravure is a printmaking technique falling under the ‘intaglio’ umbrella, where a UV-sensitive film is pressed onto a plate made from plastic or metal. Somewhat like traditional photographic processes, an acetate negative is placed on top of the plate, which is exposed to light and later developed, where the image becomes ‘etched’ into textural groves on the plates surface. When inked up, these little grooves hold the ink, allowing the image to be printed, leaving a painterly aesthetic.

With Earthworks, one of my aims was for my process to be ritualistic, in creating a way of making that could be elongated and meditational. The work was about allotment keeping, and the physicality of working with gardening. At the time, I was working an as artist in residence at a community allotment in Scotland, where a group of volunteers had saved a walled garden from demolition, by using it as their own. Even with allotments in Northumberland, there’s often a fight to secure land with growing development in the area, often in the name of tourism. I wanted my practice to be reflective of both the ‘hands-on’ physicality of this labour, and also of the ongoing conversations between man and land, so the photopolymer gravure worked perfectly! At one point, I made a large zinc etching which I inked up to make the image more visible, and installed it outside in the community allotment over a few weeks, where the natural elements started to make marks and rust the sculpture.

Large format photography alone is somewhat meditational, in the control and precision that comes with having a small amount of shots to expose. Similar to that romantic element of working in a darkroom, I really find peace in a print studio. It’s a physical process but is also very satisfying and prone to trial and error. In my early prints, I was making a lot of human marks on the work, which lends well to the concept of Earthworks. The prints weren’t perfect and my practice as a printmaker wasn’t so polished. By the time I was creating It Must Be Somewhere Here, I was definitely more of a perfectionist with my printmaking and really wanted the prints to be clean, textural and inked perfectly. Over-wiping, or under-wiping the ink from the plate dramatically changes the outcome of the final print. The marriage of printmaking and photography runs through my practice, emphasising the very textural, overgrown landscapes which I capture. I try to reference archives and historical documents by making the work feel very tactile and object-like, compared to my large format colour prints, which bring the older, more traditional looking work into a contemporary and modern light. 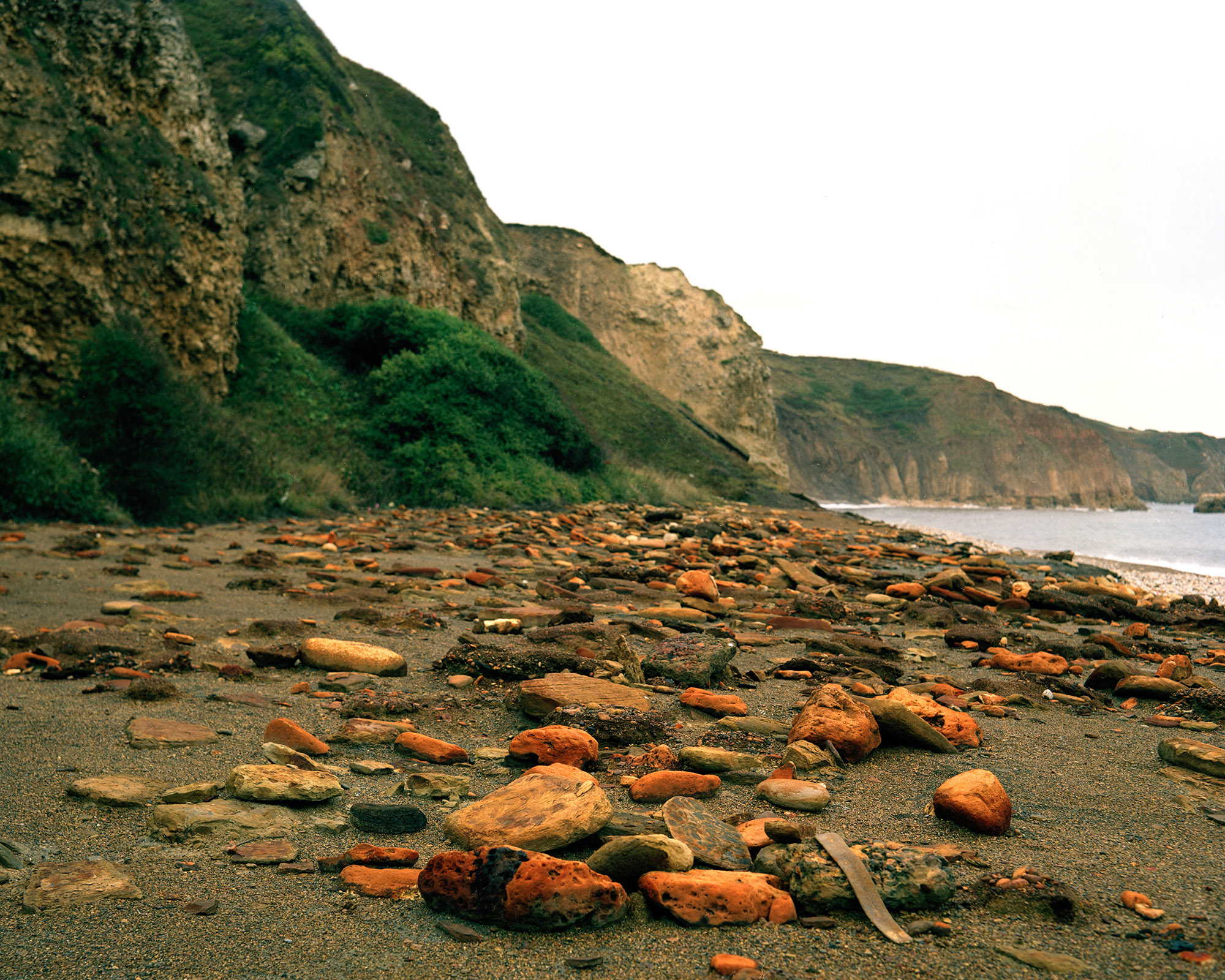 Working with large format film and analogue printmaking seems fitting for such a series. Did you intend to create a sense of timelessness?

Absolutely, I’m really glad it reads this way! I think something that the combination of 4x5 and the photopolymer gravure provides is an air of timelessness. It’s quite a nostalgic process, and an observation I often get from viewers is that in many images, you can’t really tell when the images were taken, be it now, fifty years ago or one-hundred years ago. When I had my studio space, the wall was a collage of work-in-progress gravure prints, black and white family photographs, little print outs of research and notes or poetry printed in letterpress. I’d like to think that the timeless quality is emphasised when the work is presented with archival visuals too.

How did you get into large format photography and did you always plan to shoot this series on 4x5?

I mentioned earlier that the first project I shot with the 4x5 was The Coming Soon Land, which was also partially shot with medium format film. When I was at Edinburgh College of Art, we had the most wonderful technician, who really nurtured my interest in large format photography from the get-go. I progressed from 35mm to medium format and eventually to large format, borrowing an Arca Swiss and an MPP before it was pretty clear that I’d stick with large format for a long time! Eventually, I got my hands on an Intrepid 4x5 MK4 and the rest is history! Process is paramount to my work, and whilst it’s great to have options, I tend to naturally see future work continuing this way. 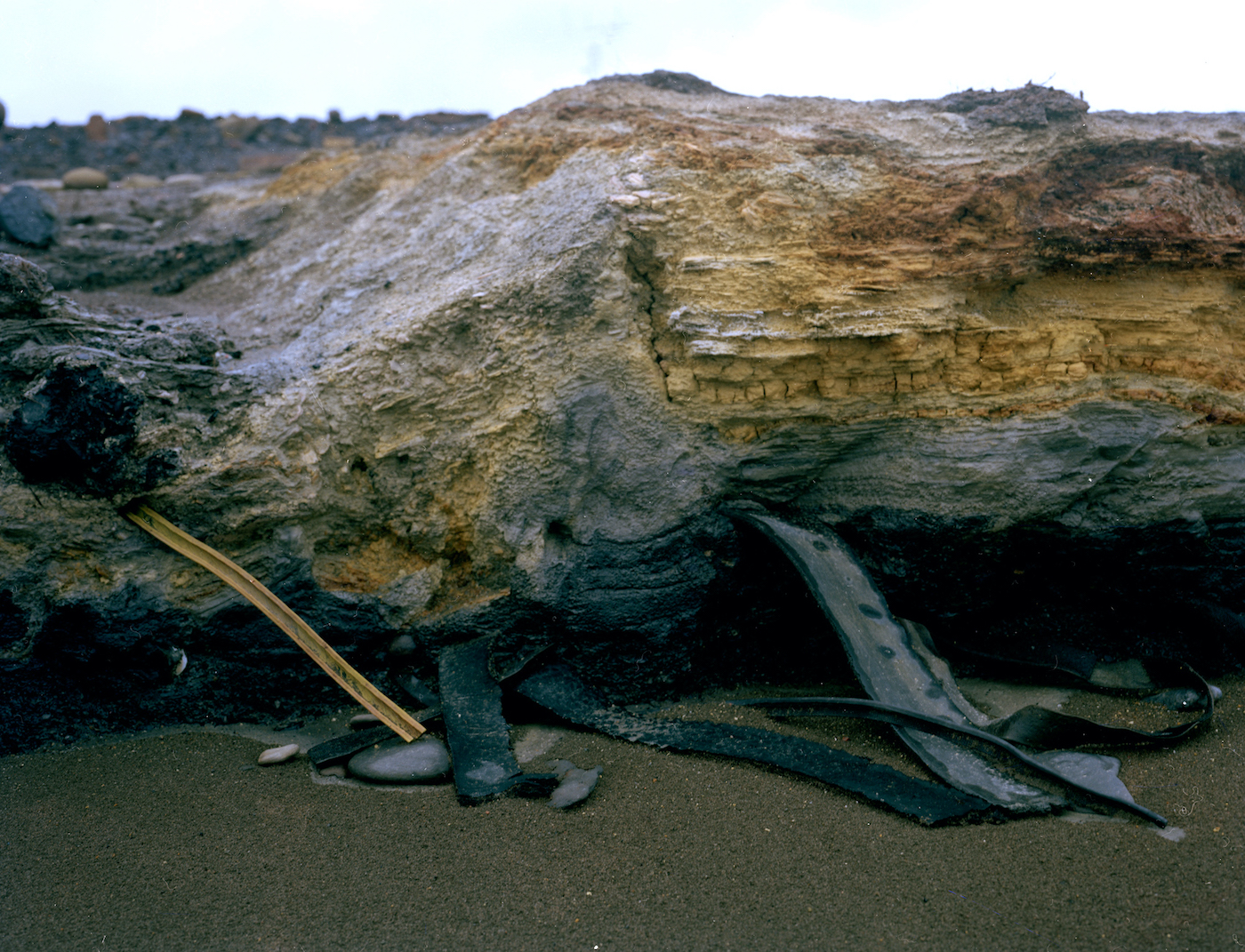 Is this a series you will continue or if not do you have plans to explore similar themes and locations for future work?

Yes! In the midst of the pandemic, I think most of us have seen our creative practices change. I was preparing for my degree show when my cohort lost access to our facilities, and so the final element of the project had to be postponed. It’s not yet been shown in a physical exhibition, so that’s definitely something I’m planning further down the line! I love working with artists books, and was planning on spending the final few months before the show working on utilising one to bring together the various elements of It Must Be Somewhere Here – research, notes, found images, prints – in a very physical and tactile way.

Recently, I secured some funding from the Richard and Siobhan Coward Foundation’s Analogue Photography Grant to realise the final instalment of this project, so have started to reach out to potential collaborators. I moved back to the North East recently to pursue a postgraduate course focusing on curation, which has been a long-standing interest of mine running alongside making, so my ambition is that next year will shape my practice even more, as both a curator and an artist, intertwining these approaches into one. Once I’ve had some time to rest and recover from the past few months, I’m looking forward to using the coming weeks to plan the final few shoots of this project, to get out and about shooting again with my Intrepid and work on my artists book – which I’m proper chuffed to get cracking on! 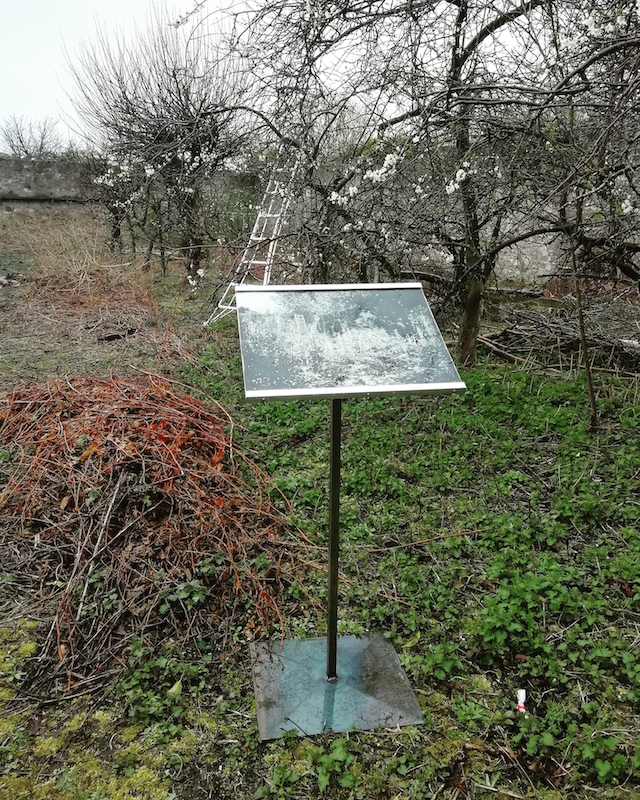